My neighbor two houses down routinely has 4 or 5 hummingbirds flitting around her two feeders every day. (I have to admit that I have been known to “check” occasionally.) I, on the other hand, have one diehard who comes once a day, drinks and then flies off to the neighbor’s yard. Determined to finally get to the bottom of this hummingbird inequality, I did some research and learned that there really is a method to designing a hummingbird friendly garden. I found that understanding these captivating creatures is the first step to a successful garden. 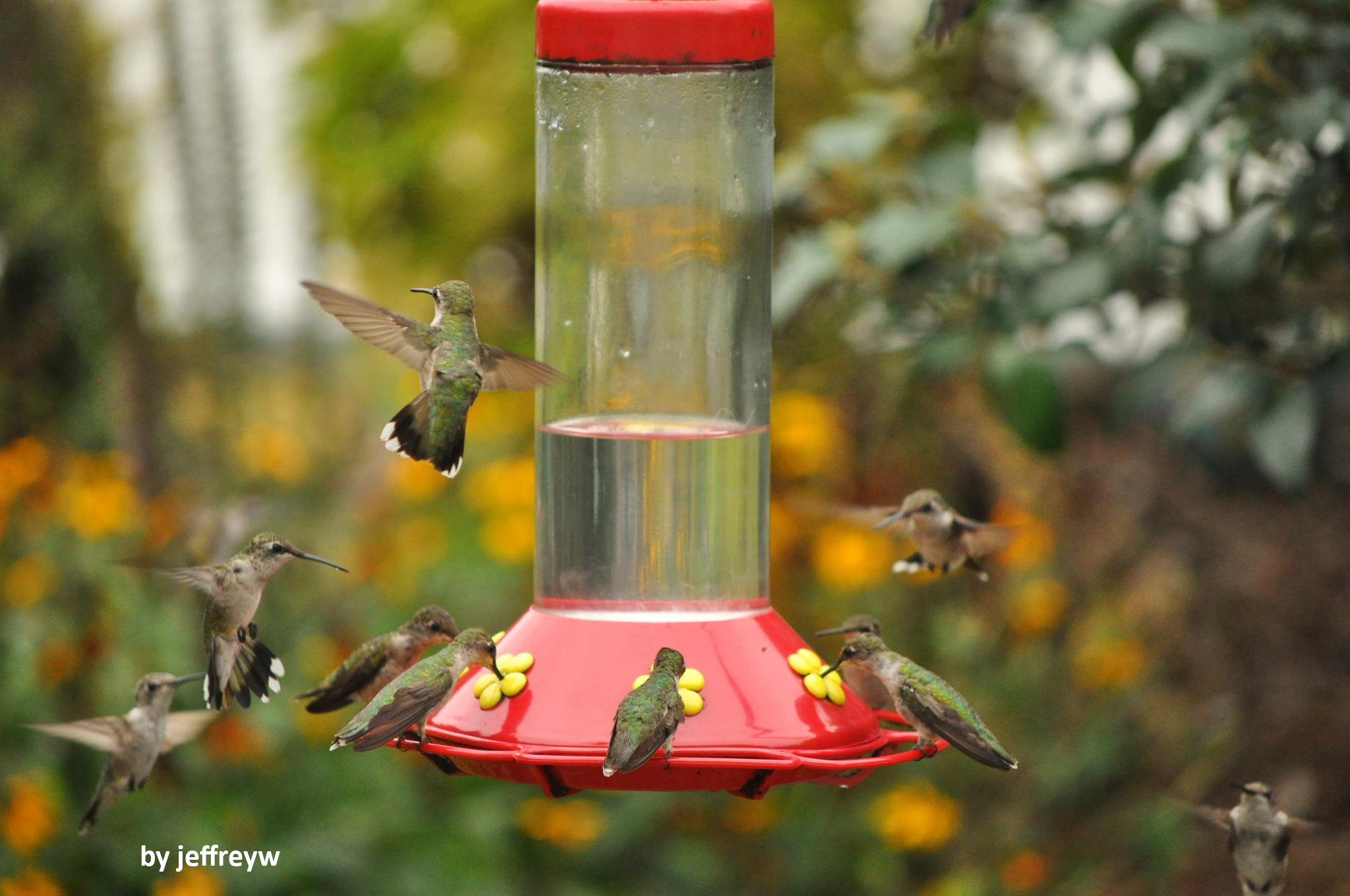 There are more than 300 species of hummingbirds throughout the world, but only about two dozen are found in the United States and Canada. Of the 24 common here, just a few like the Ruby-throated and the Rufous are common residents across large swaths of the country, while the rest are usually found in smaller regions. There are several online sites with region-specific information, but I find that https://www.audubon.org/  and Cornell’s https://www.allaboutbirds.org/ are extremely reliable sources.

While each species has its own unique characteristics and quirks, they also share some common traits.  These tiny birds, usually between 3 to 5 inches tall, have an extremely high daytime metabolism, with heartbeats of around 1000 beats per minute. (Normal range for adult humans is 60 to 100 beats per minute.) At night or during deep resting periods called torpor, a hummingbird’s heart rate dramatically lowers to 50 to 180 beats per minute and it may lose up to 10% of its body weight.

Hold a penny in your hand and you are holding the approximate weight of a Ruby-throated hummingbird. A nickel weighs more than a Rufous. In order to survive, hummingbirds need to consume half their body weight each day. They feed 5 to 8 times per hour, licking nectar with their long tongues or eating dozens of small insects, insect larvae, insect eggs and spiders. 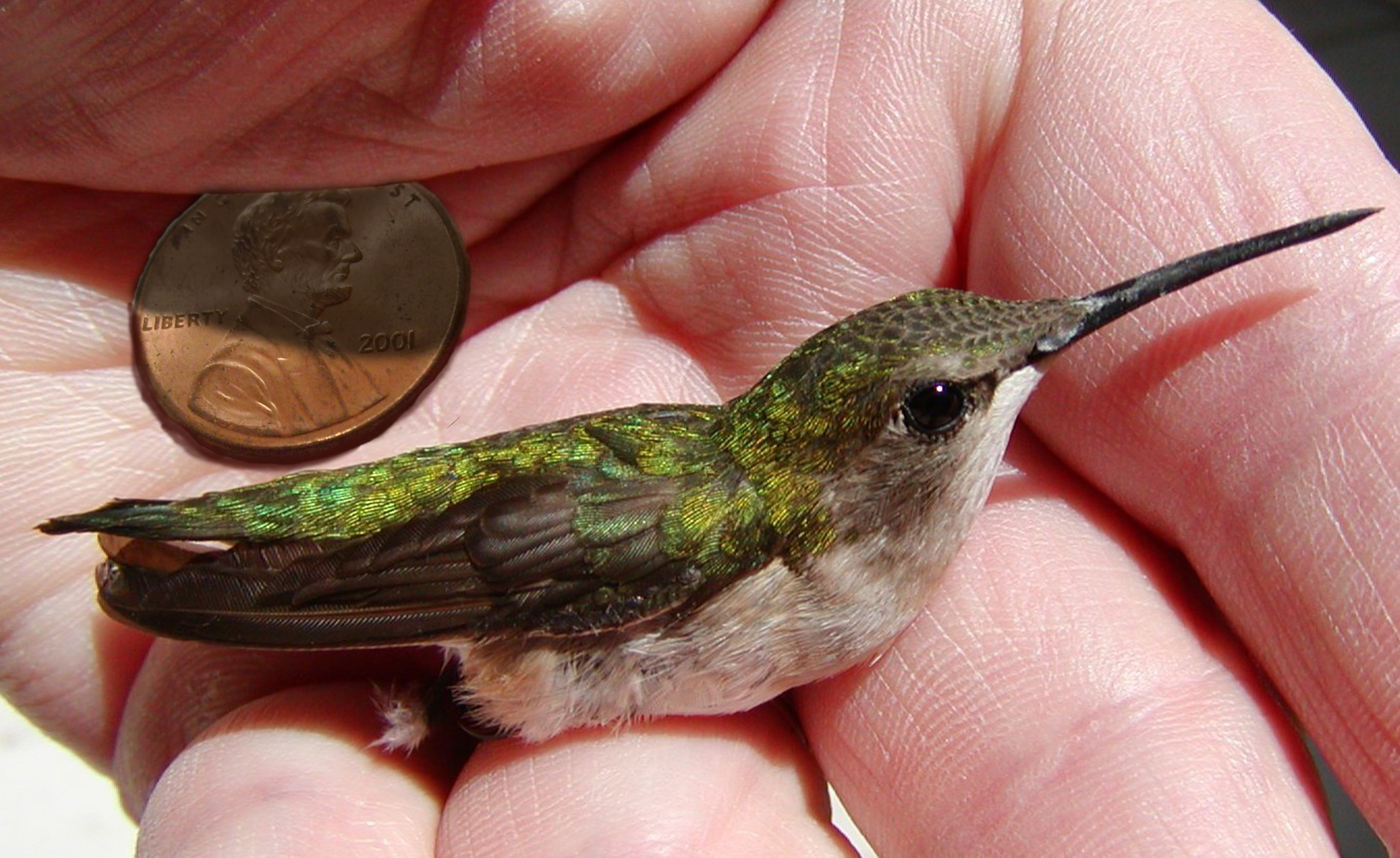 Hummingbirds have extremely short legs. They neither walk nor hop like most other birds. Instead, hummingbirds perch. They also have extraordinary eyesight, seeing color as well as humans do. In fact, hummingbirds also see ultraviolet light, which intensifies colors and makes finding nectar-filled flowers even easier. 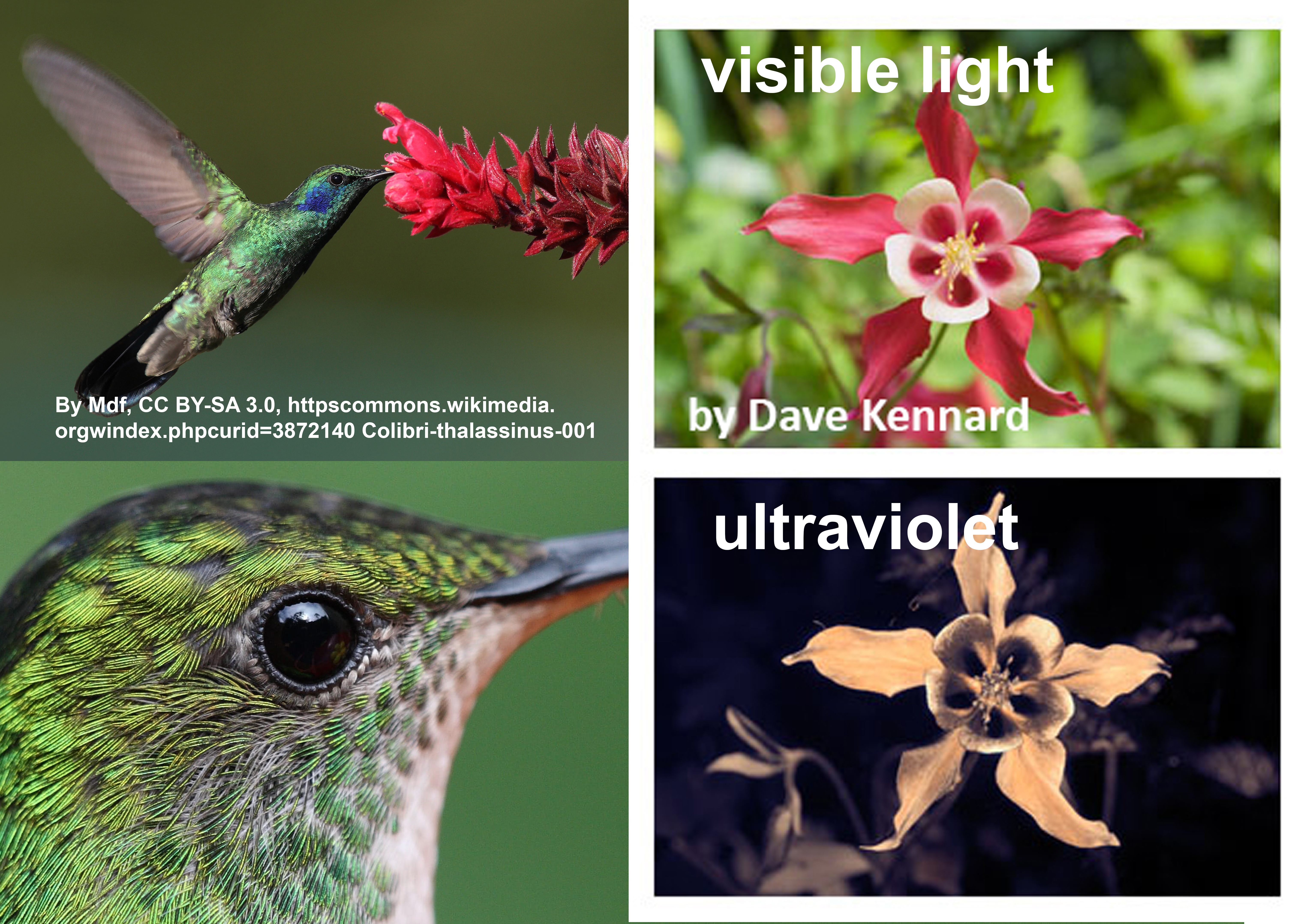 Most birds flap their wings up and down as they fly. Hummingbirds however, use a figure-eight pattern that gives more flexibility to their movements. They can fly forward, backward and sometimes upside down. While wingspeeds vary by species, 50 to 80 beats per second is average for most hummingbirds. This rapid movement allows them to hover as they draw nectar from flowers, but also means that they constantly expend a great deal of energy. 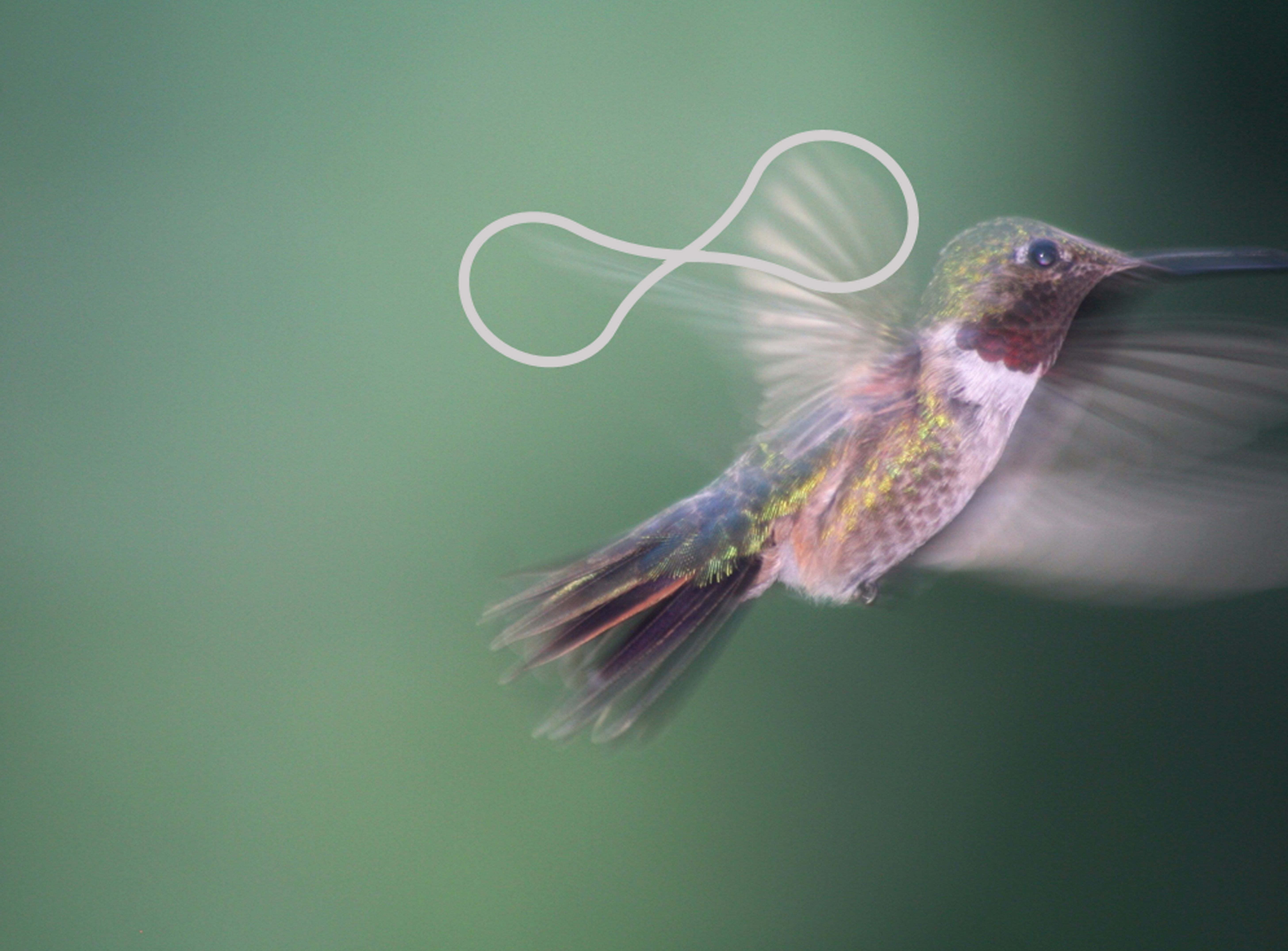 The majority of articles I have read this summer focus on which flowers to plant in order to attract hummingbirds to your yard. While that is important, I’ve learned that there are some other factors that should also be considered as you plan your garden. 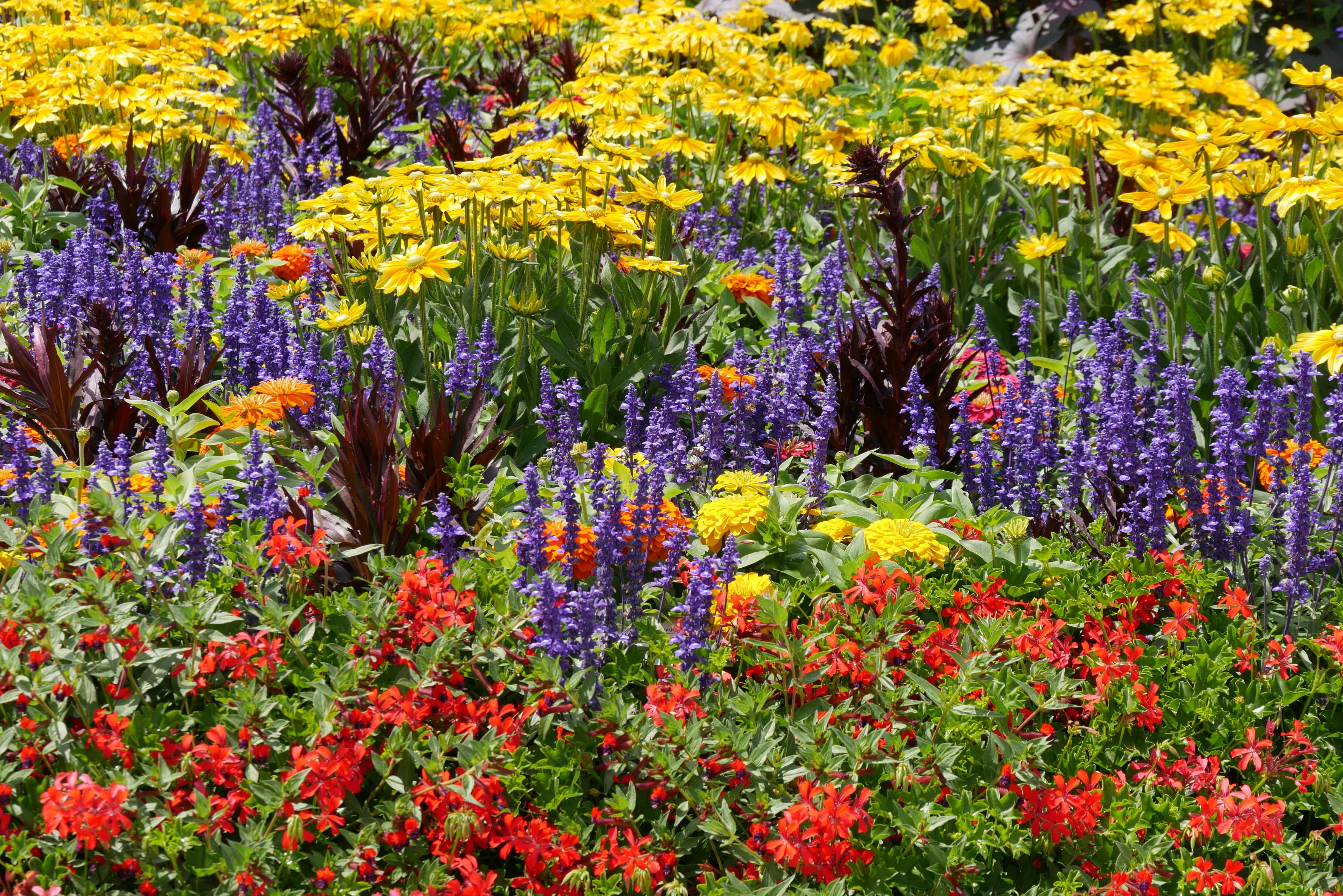 Hummingbirds use up a lot of energy as they search for food. A longer, more narrow garden keeps food sources close together, eliminating the need for extra flights from bed to bed. It also gives enough room for several birds to feed without feeling the need to defend their territory. Adding a curve to the bed is not only visually pleasing, it also gives the birds a better view of their surroundings, allowing them to watch for both competitors and predators. 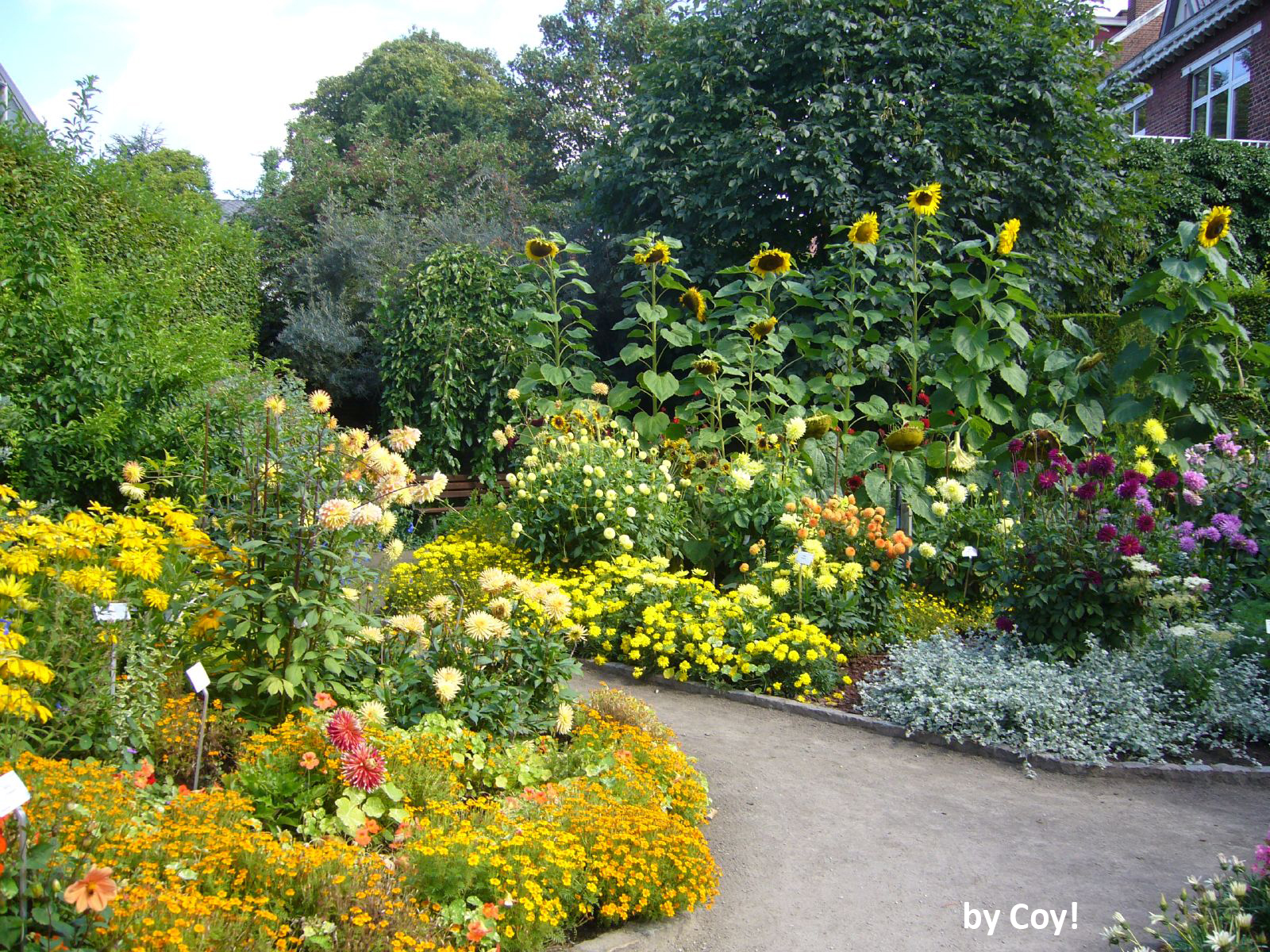 A hummingbird garden needs access to both sun and shade. Many of the nectar producing flowers hummingbirds crave grow best in full sun, but having a safe, shaded resting spot nearby lets the birds rebuild their energy before striking out on another feeding frenzy in the sunny portion of the garden. Although hummers will appreciate and use a specially designed hummingbird swing as a resting place, tree branches work just as well! 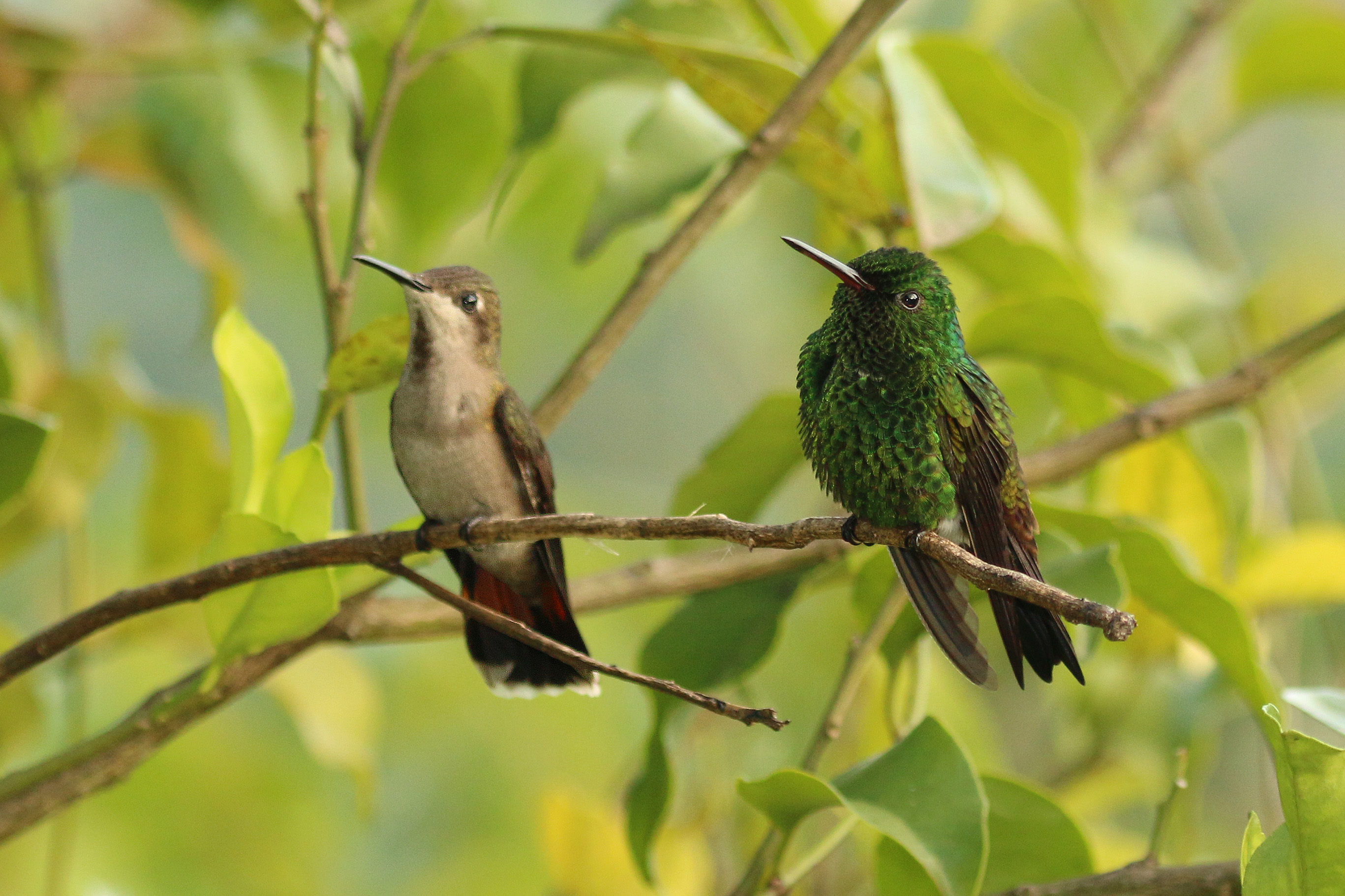 Just like other bird species, hummers enjoy taking baths. Unlike other species however, hummingbirds don’t usually immerse themselves in water. Instead, they prefer dashing under and through sprays of water. They will even shower by flitting through droplets of water falling off of large leaves after a rainshower. Installing a mister or a spray jet in a shallow bowl is a sure way to attract hummingbird bathers. 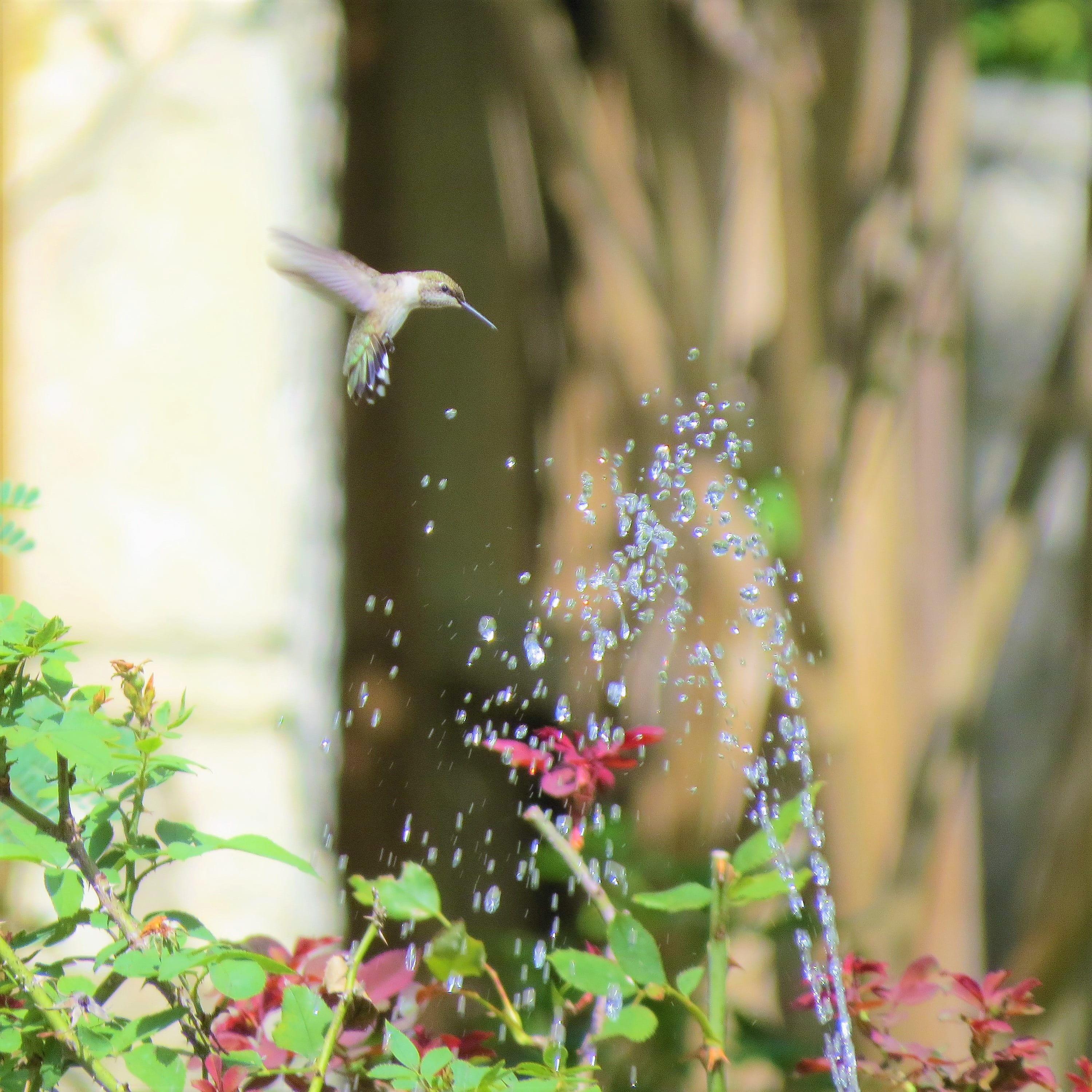 Incorporating feeders into the garden plan is essential. Even with an ample supply of blooms, the seemingly insatiable hummers will flock to feeders. Having at least two feeders at opposite ends of the garden, and even a third in the middle, helps to draw larger hummingbird crowds.  A single feeder encourages the most dominant male to claim the territory as his own, chasing all others away.. 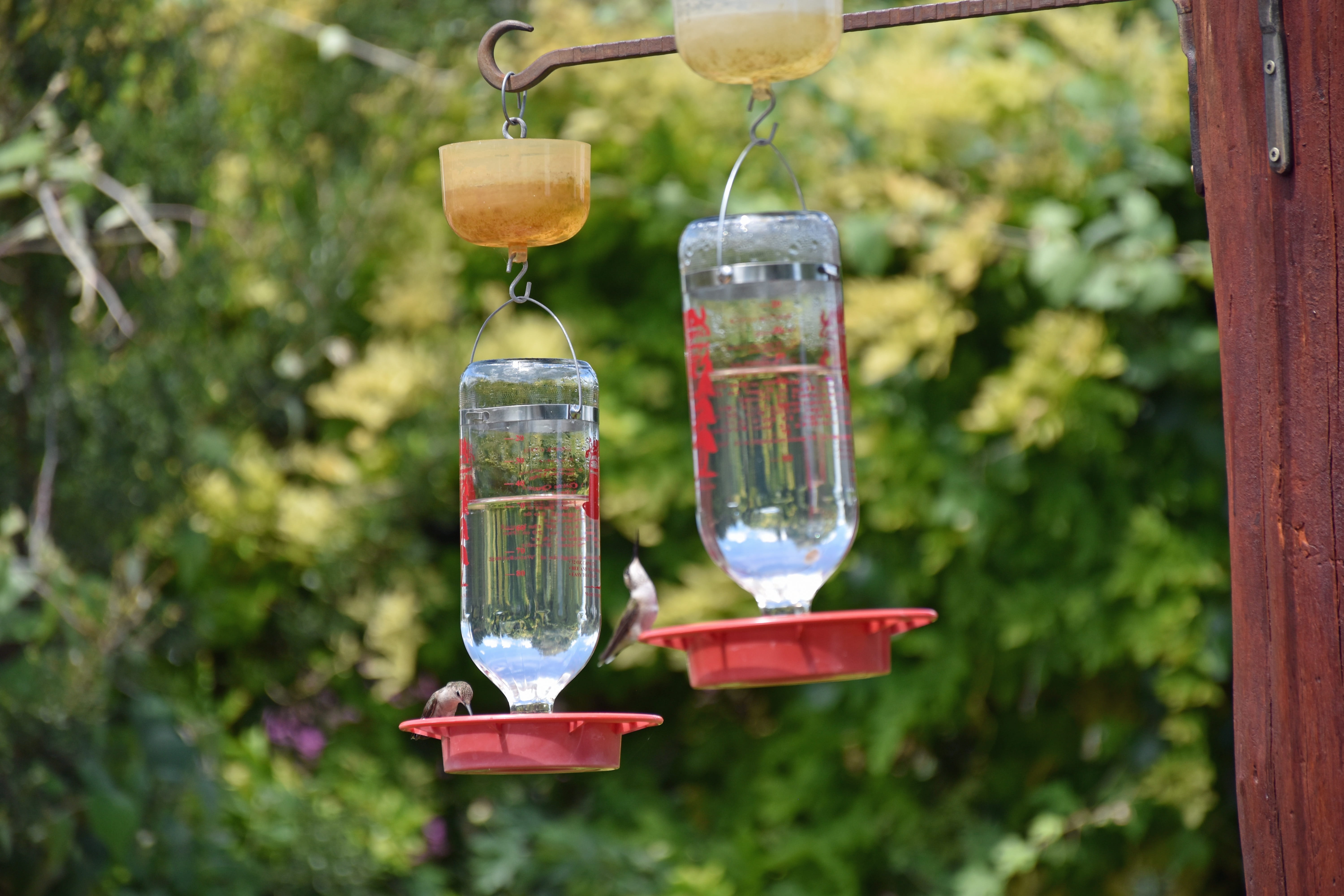 If possible, hang  the feeders in a shaded location. It will help keep them cleaner by slowing the growth of the mold and fungus produced from the sugar. Mold produces a deadly bacteria and fungus can cause a hummer’s tongue to swell, making it impossible for the bird to eat. Either vigorously scrub the feeders every few days, or soak them in a solution of vinegar water, rinse them thoroughly and then dry them before refilling with fresh nectar. If you make your own nectar (4 cups of water to 1 cup of sugar).  It isn’t necessary to add red food coloring. Although the research is inconclusive, many researchers believe that adding red food coloring to homemade nectar can have harmful effects for the birds. 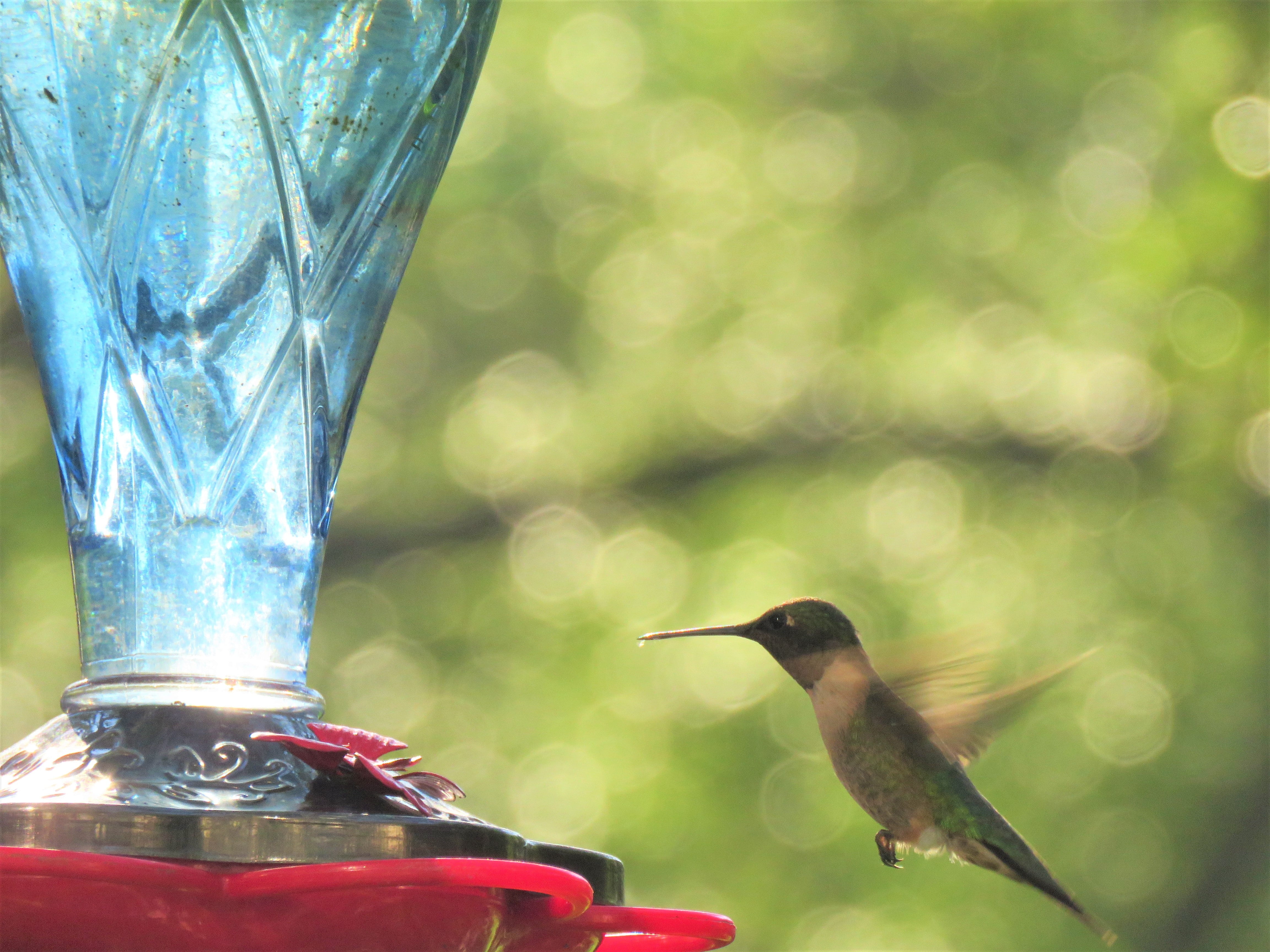 Although spiders are a favorite food source, spider webs are important too. They are a favorite nest building tool for hummingbirds. The hummers pluck the threads from the webs to use in weaving their teacup sized nests. The fine thread of a spider web is soft, pliable and durable, making it an ideal material to gently cradle the two jelly bean-sized eggs that females lay. As the eggs hatch and the babies develop, the web thread stretches without breaking, letting the nest expand just enough to accommodate the growing family. Leaving a few spider webs in and around the hummingbird garden encourages the birds to breed and raise their young nearby, plus the spiders make a nice meal. 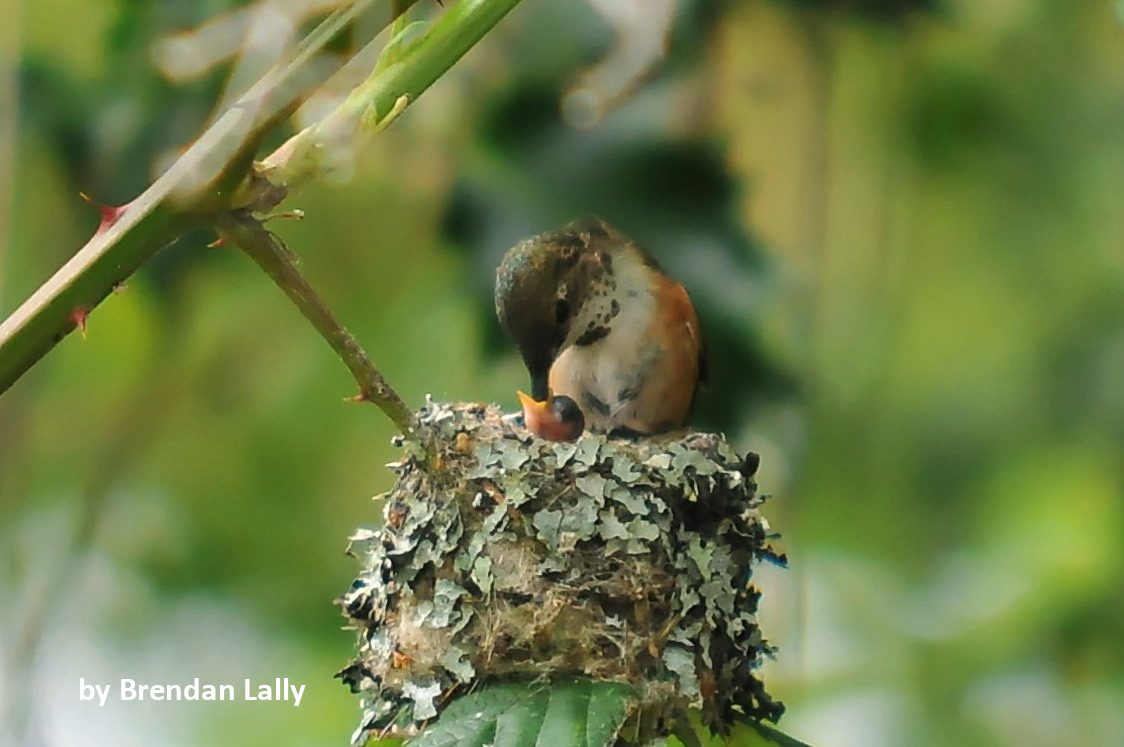 Avoid the use of chemicals in and around your hummingbird garden. Although we think of hummingbirds as nectar feeders, they also consume thousands of insects over the course of the season. Chemicals can be taken up into the systems of insects, and then can be ingested by the hummers. Even days or weeks later, absorbed pesticides have been shown to alter the ability of birds to reproduce healthy young. In some cases, absorbed pesticides have been shown to kill the birds. 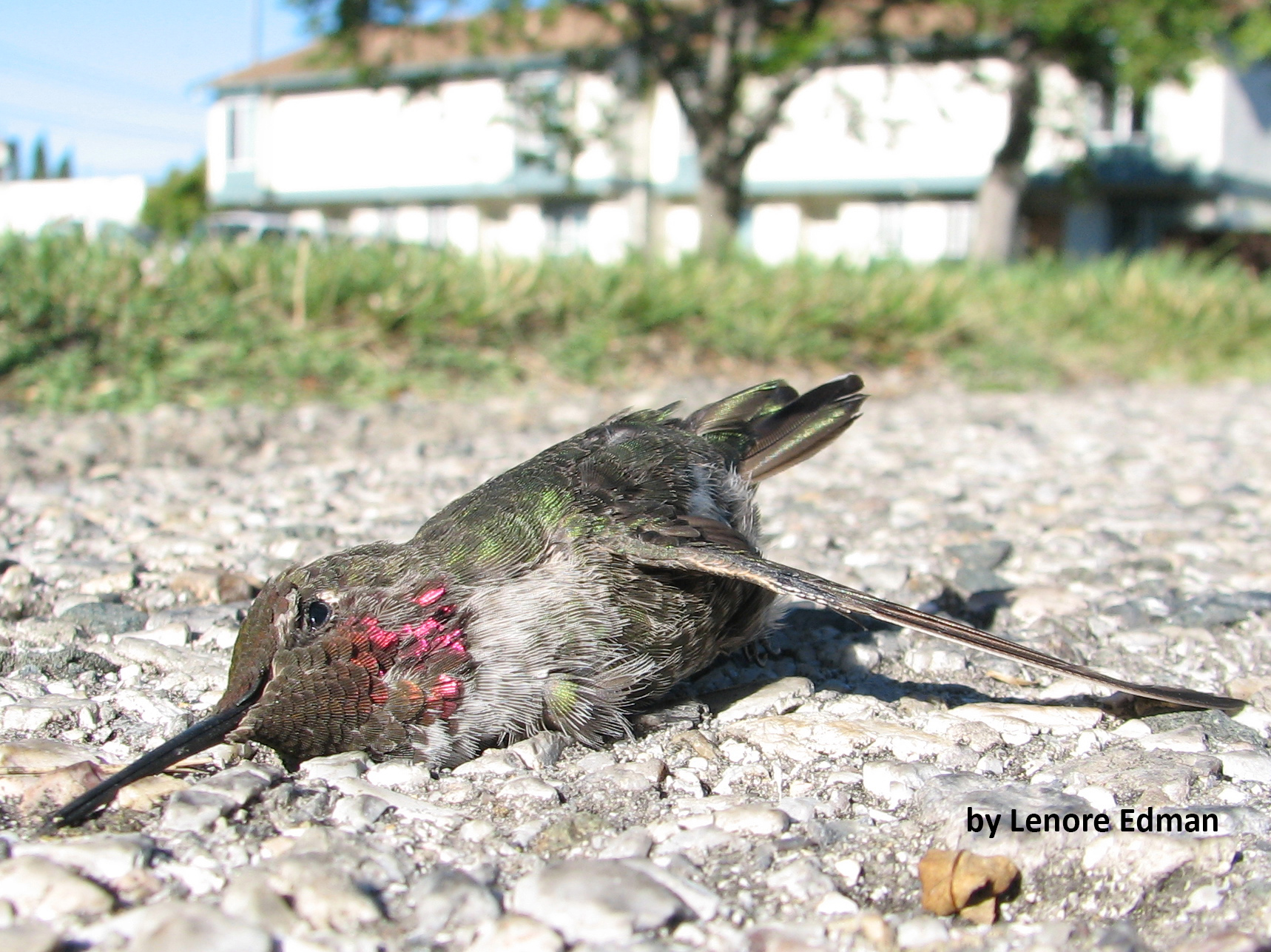 Adding the right mix of plants is the final step in developing the perfect habitat for hummers. Join us next time as we delve into some of the best flowers to keep your garden humming! 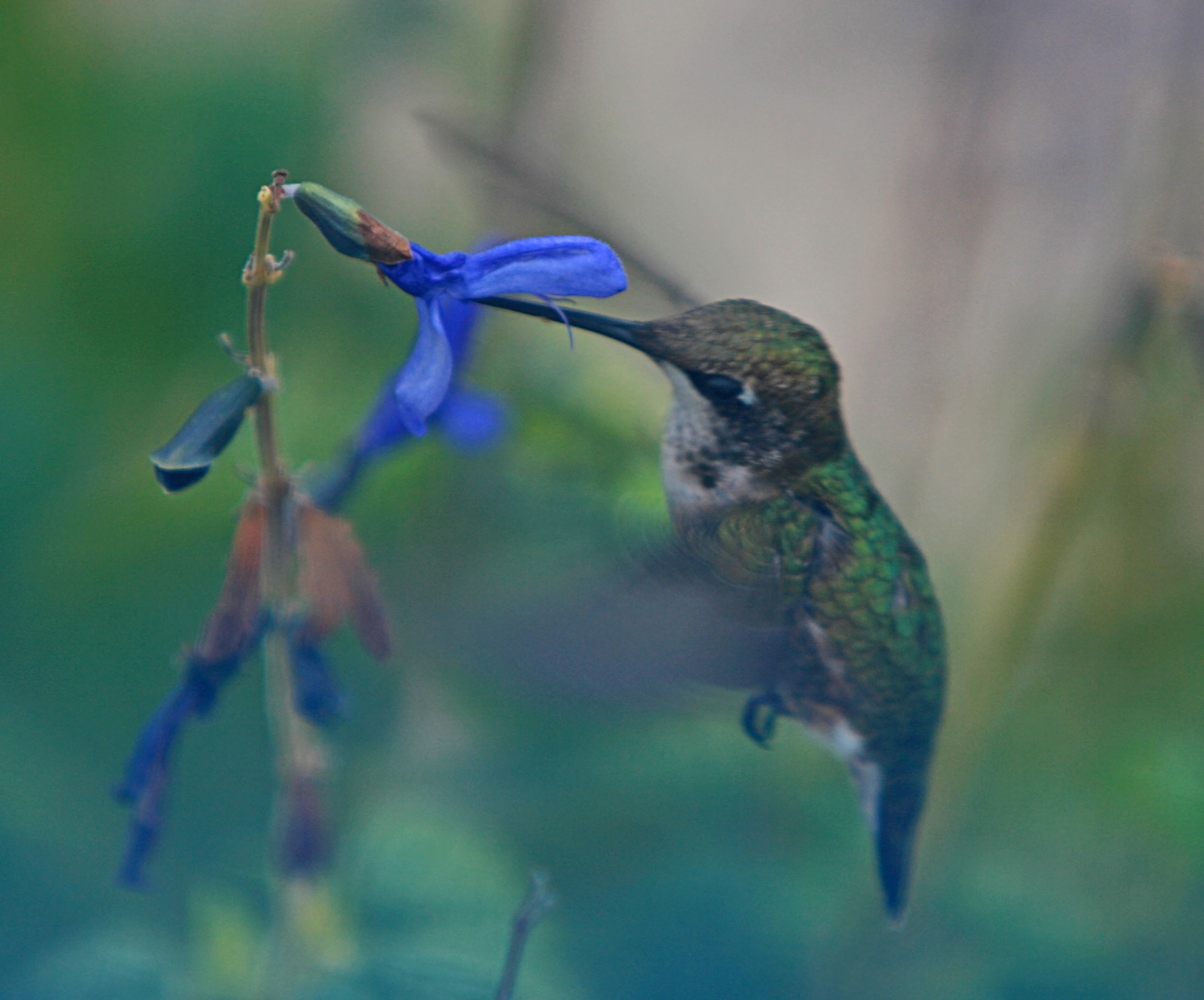