I realized something this week. What I see in the winter is significantly different than what I see in the summer. I know that seems painfully obvious, but bear with me. In the summer, I spend much of my day outside either on the deck playing with the grandkids or tending the garden. Then, I see our lush backyard and the woods behind it. In the winter however, I spend hours in the kitchen, standing at the sink and gazing out the window that faces 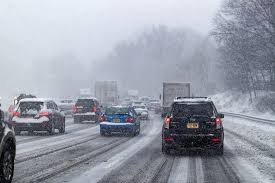 our front yard. Although we are putting in a prairie, right now the view from the front is much more urban in nature  --  sidewalks, streets, cars and houses. It isn’t a calming view.

Thinking about where you see the outdoors is the first step in transforming a rather blah winter landscape into a masterpiece. So, how do you change an ordinary planting into an extraordinary winter scene?

Once you have decided on a spot to revamp, then it’s time to take some cues from nature to create your picture perfect scene. Think about taking a walk across a meadow or through a woods. One of the first things that you notice is that in either place, the plants are not growing in isolation. Groups of plant species  --  sometimes a few and sometimes many  --   are grouped together. Although they are all growing in the same location, the contrasts of their different shapes, forms, sizes and colors stand out. You notice the individuality of each plant within the cluster.

Effective winter landscape design mimics natural plant communities by grouping plants together that form an aesthetically pleasing picture. In the scene below, the taller bare-branched deciduous trees in the background contrast with a variety of mid-sized grasses and shrubs and low-growing and vertical evergreens. The fence in the foreground helps pull the eye across the scene. 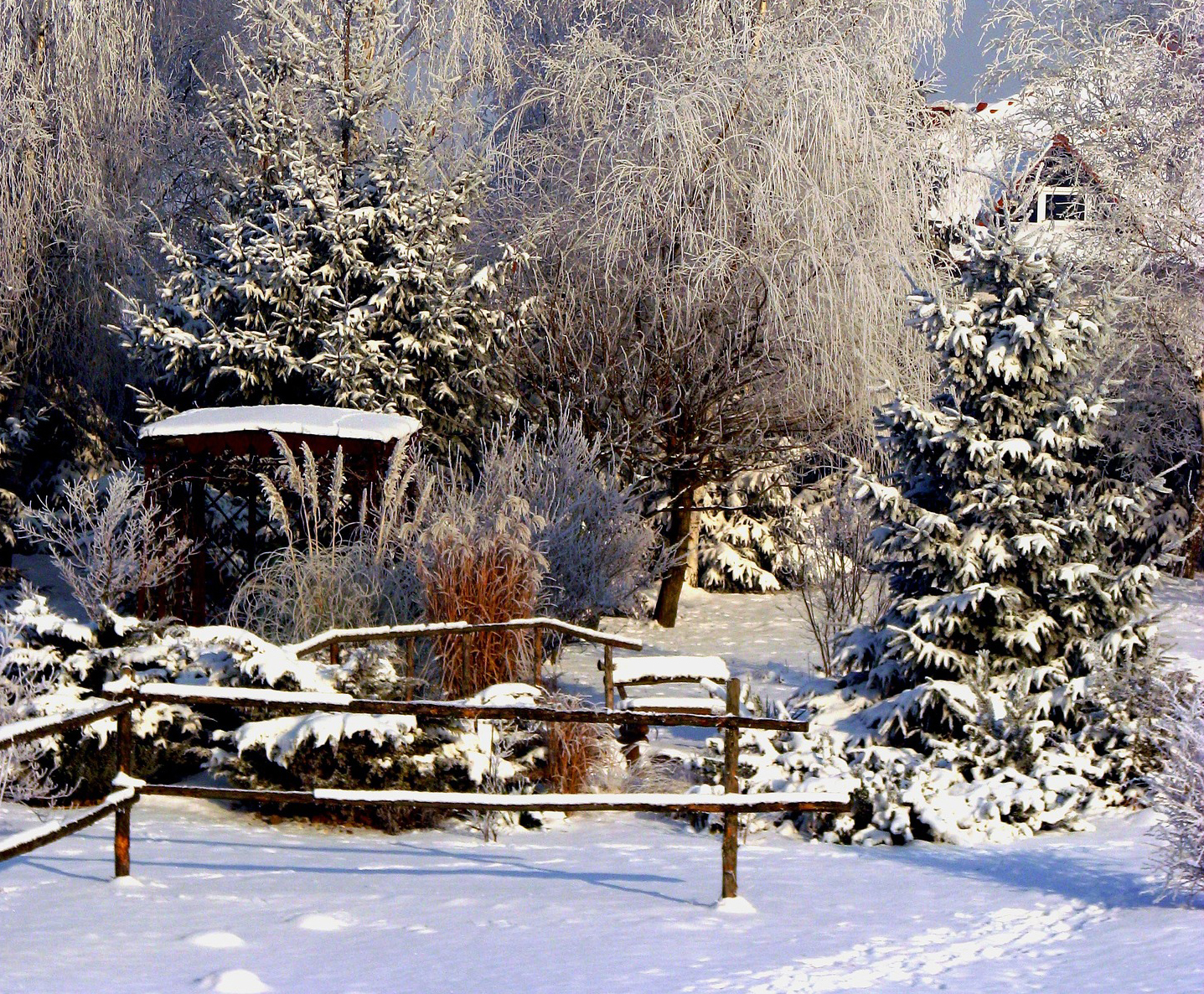 Leafless trees, brown grasses, endless snow and grey skies could make for a bleak and downright boring scene. Instead, the positioning of the simple elements in this image draw and hold your eye. Repetition of the strong lines of the deciduous trees flanked by the stand of upright grasses which are in turn anchored in and contrasting with the white snow, create a sense of mystery and drama. Imagine the same scene against a vivid blue sky. The mood would definitely shift but the image would still be gorgeous. 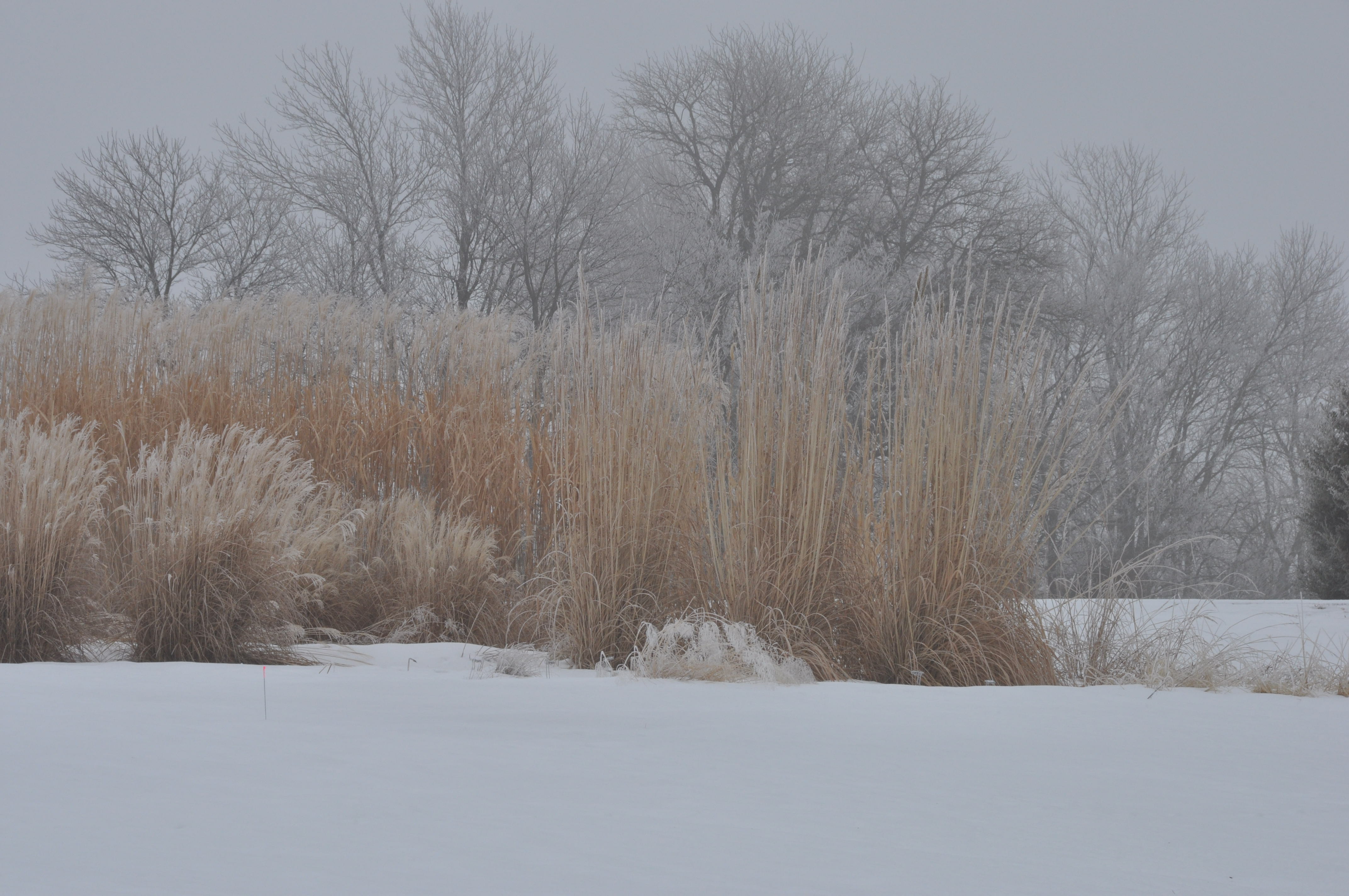 Winter here in the Midwest often means weeks of cold weather but no snow. Groupings like the ones below can help alleviate the sense of dull sameness that winter can bring.

In the first image, the play of light against dark creates interest. The lighter color of the rows of bare trees stands in sharp contrast to  --  almost pulling away from  --  the darker evergreens behind them. Details, which otherwise might be missed, stand out and urge the viewer to look closer. 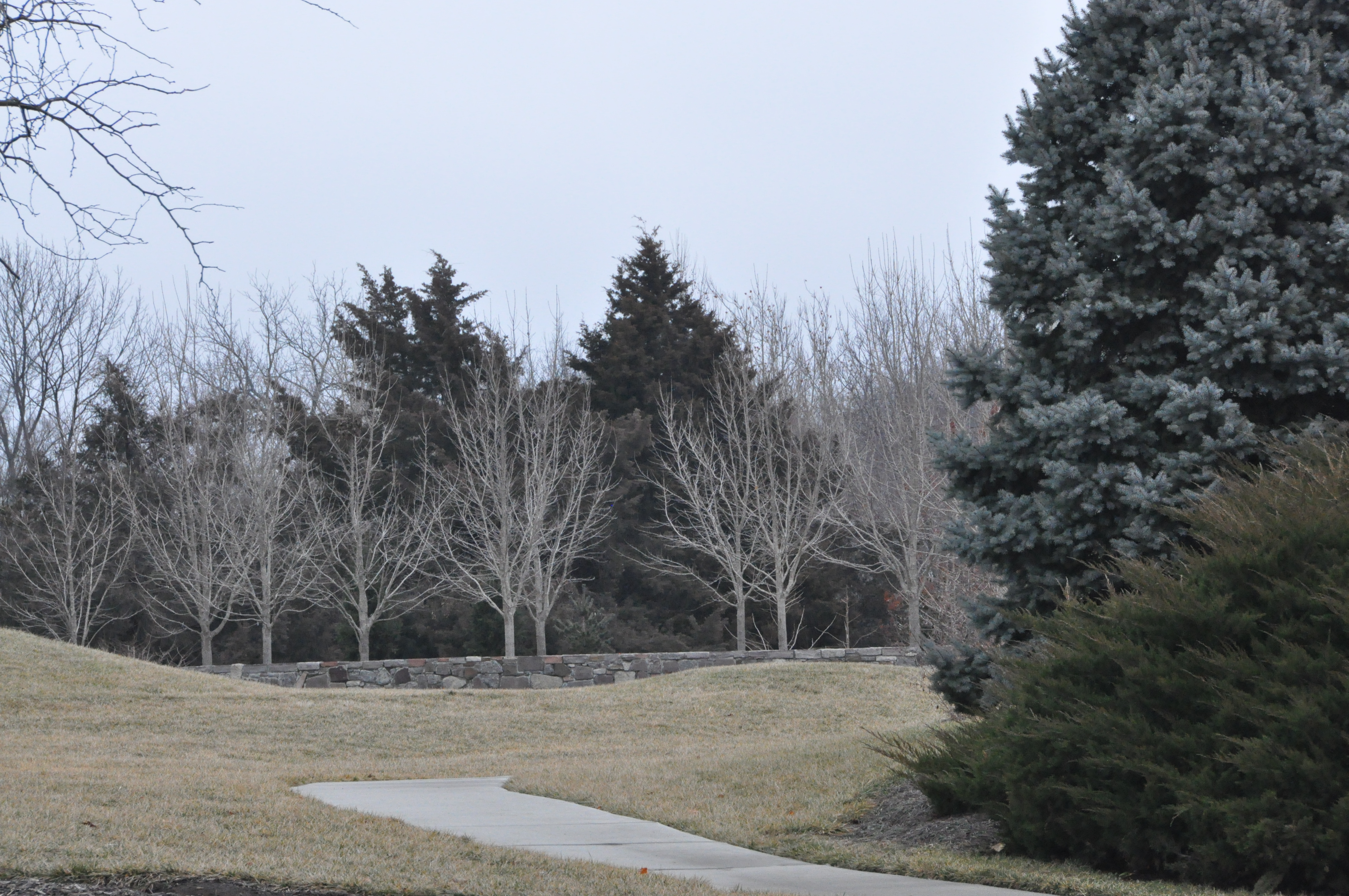 In this second image, notice how the green of the cedars in the background provide an appealing contrast to the lighter brown grasses. The splash of color in the foreground is almost a gift, reminding you that spring with all its colors is coming. 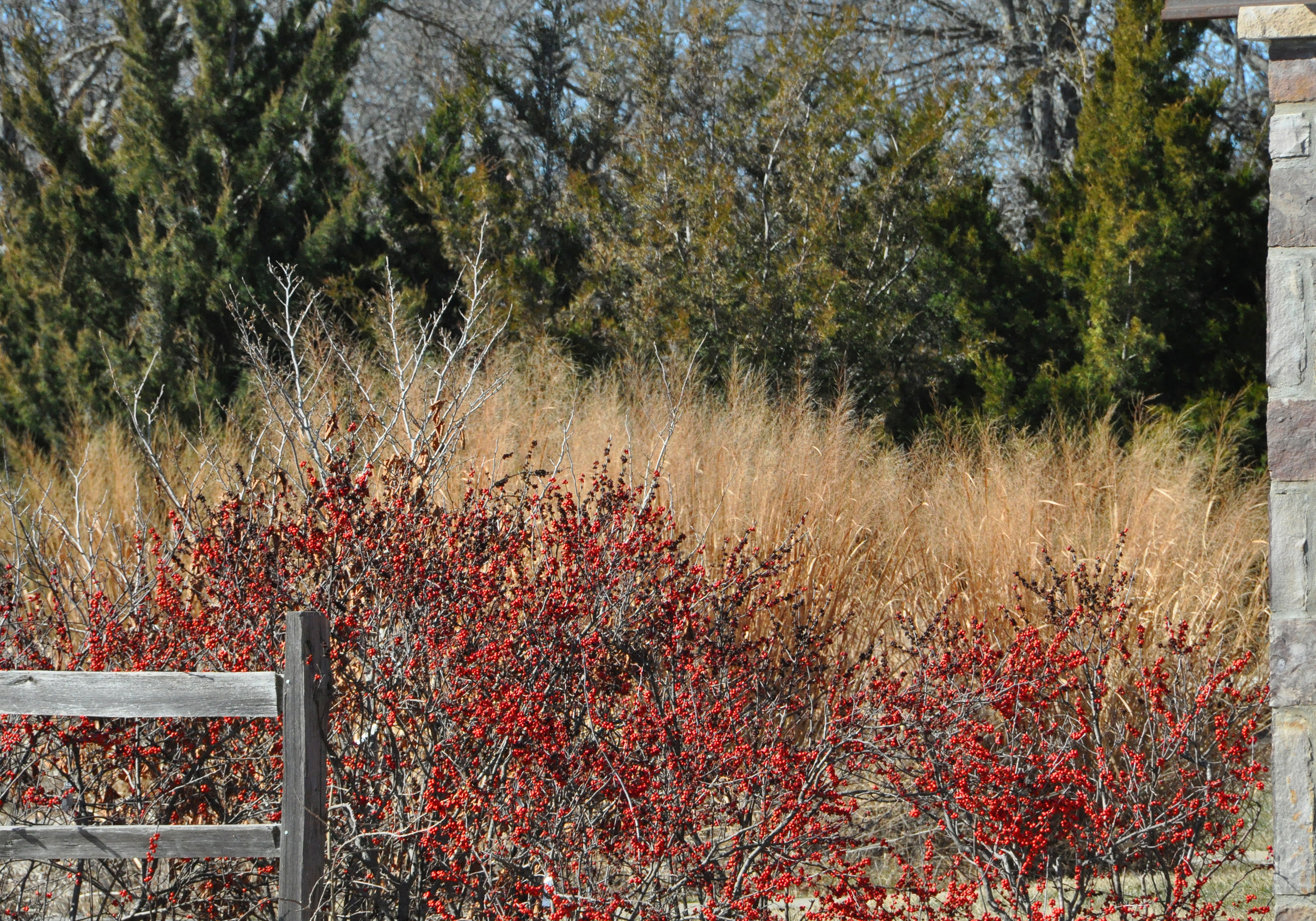 Another type of contrast that adds interest to the scene revolves around the perceived weight of the plant material in contrast to any surrounding elements. The thickly berried branches appear light and airy when viewed next to the solid structure behind them, but would seem much heavier if they were sitting in an open space. 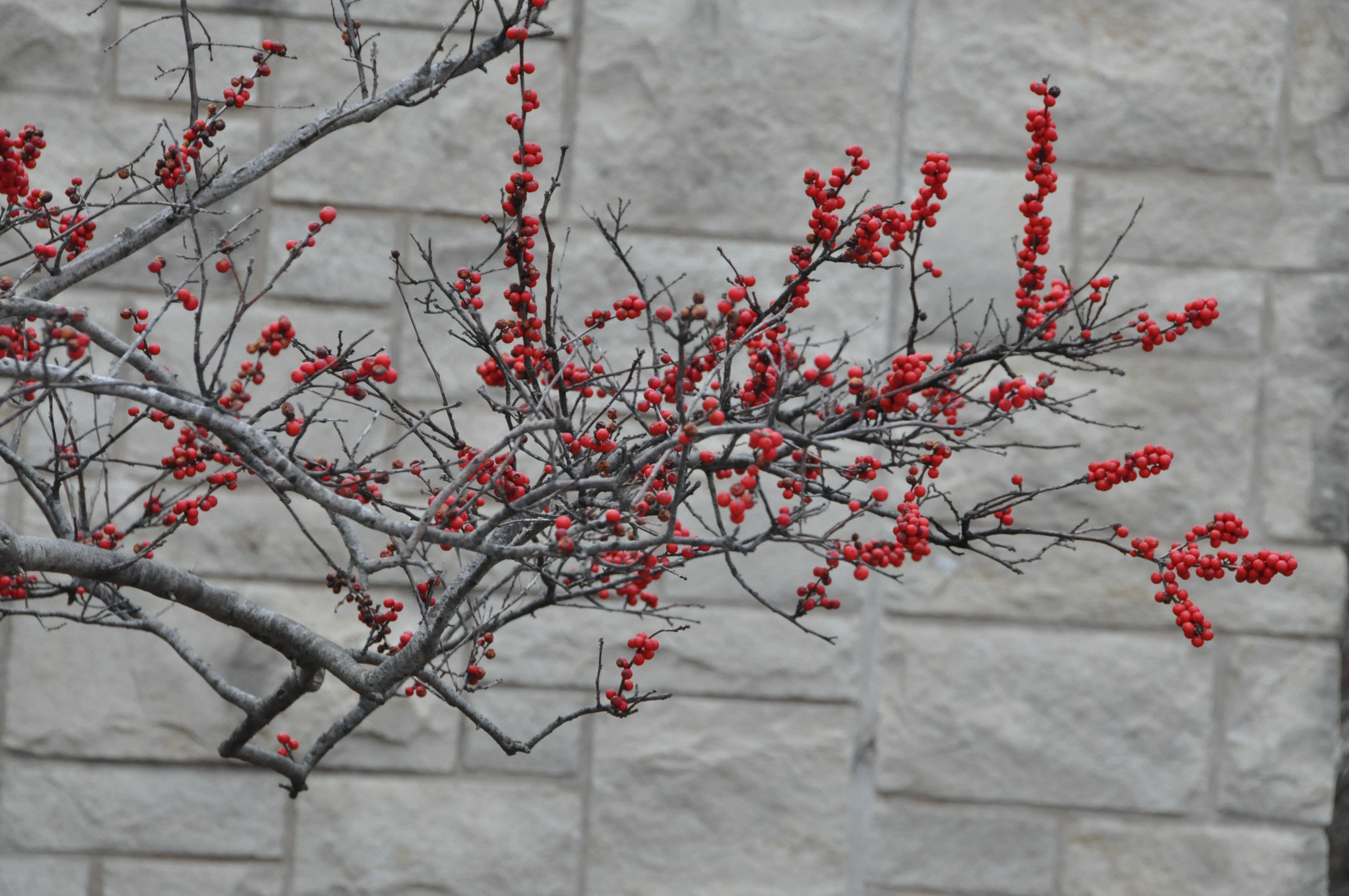 While we've made a good start in transforming average to awesome, there are still more critical elements to explore. I hope you will join us next time as we continue to to learn how use wintertime eyes.