Celebrated for centuries in song,

The holly and the ivy

When they are both full grown

Of all trees that are in the wood

The holly bears the crown 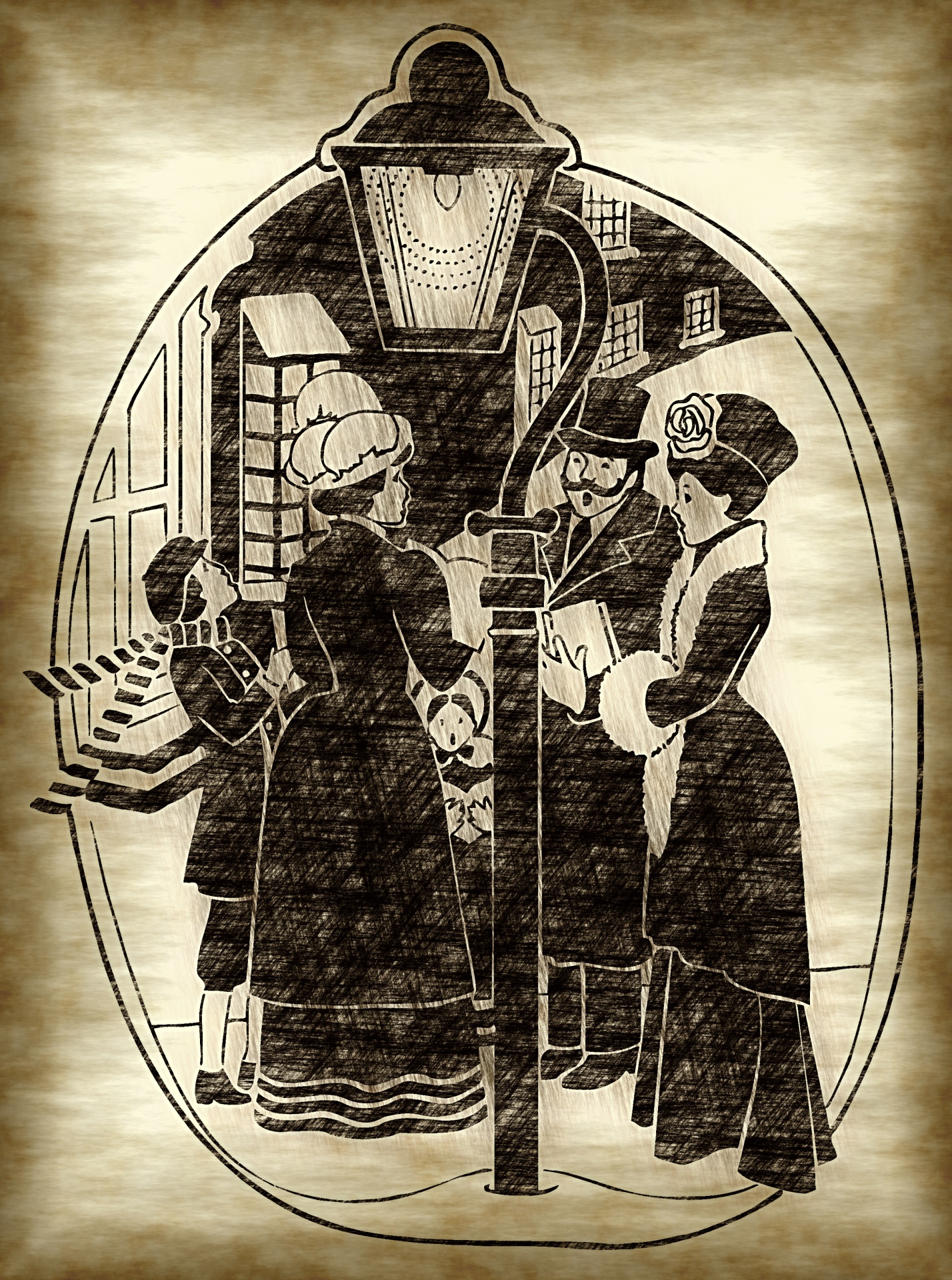 Glorified for decades in poetry,

But O, in all green English woods

Is aught so fair to view

And its berries burning through?

Lauded now as a classic holiday decoration, holly is actually so much more.It not only offers a link to the past but also adds beauty and functionality to the present. 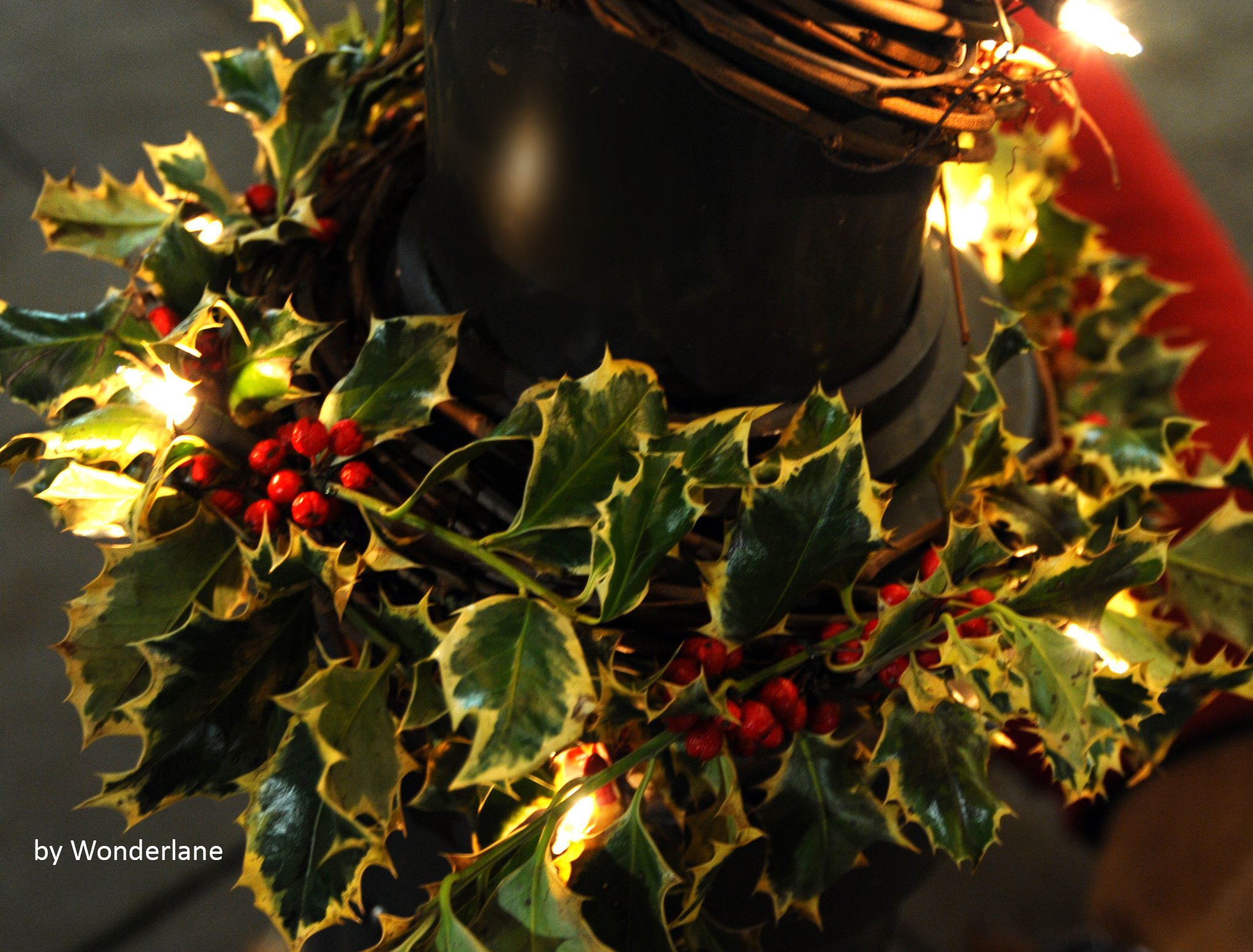 Prized throughout history for its magical powers, holly has been both praised for good and blamed for evil. 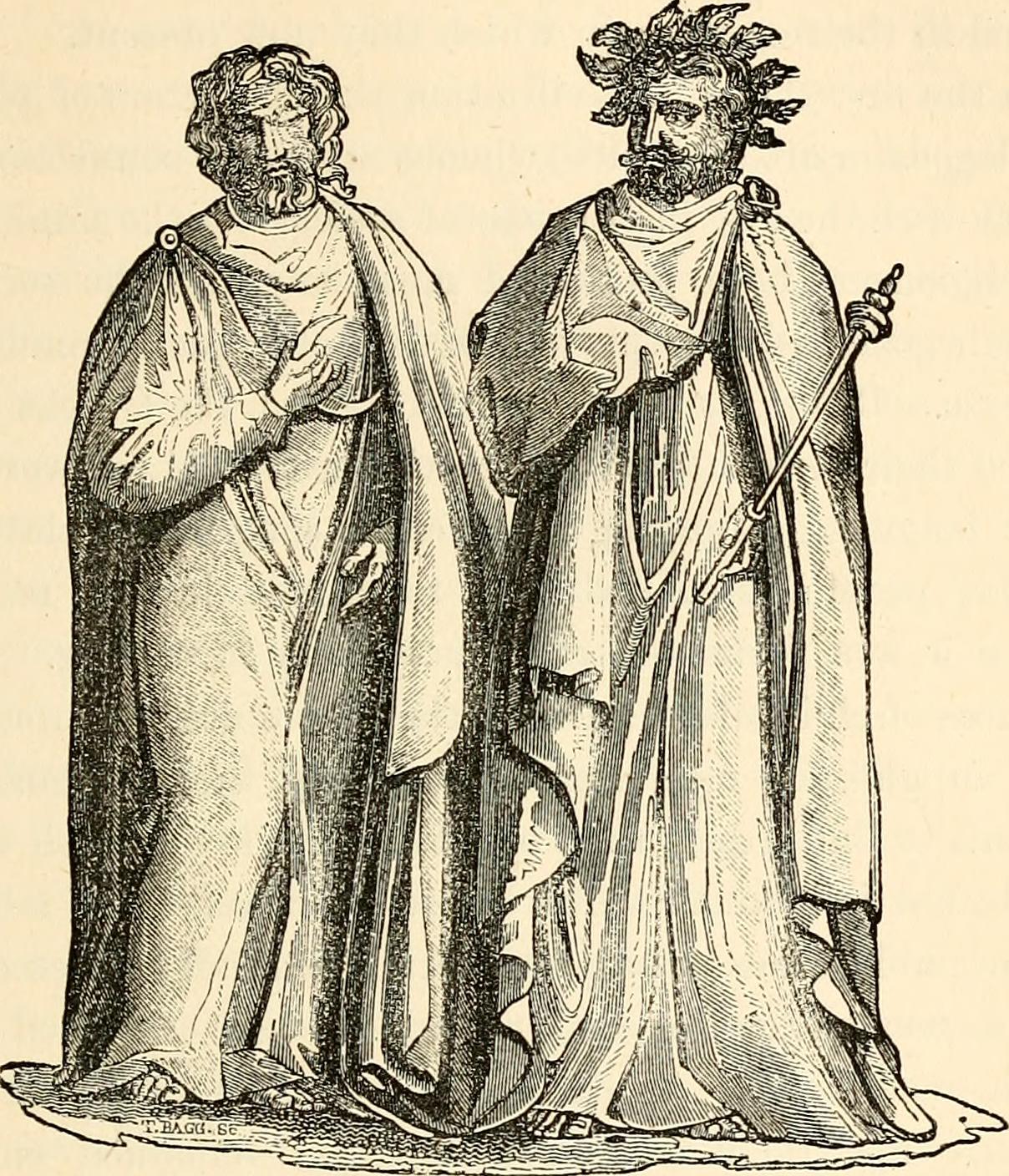 Ancient Druids believed that holly branches kept witches and evil spirits away and that, if brought inside, holly gave shelter to benevolent elves and fairies while repelling malevolent ones. 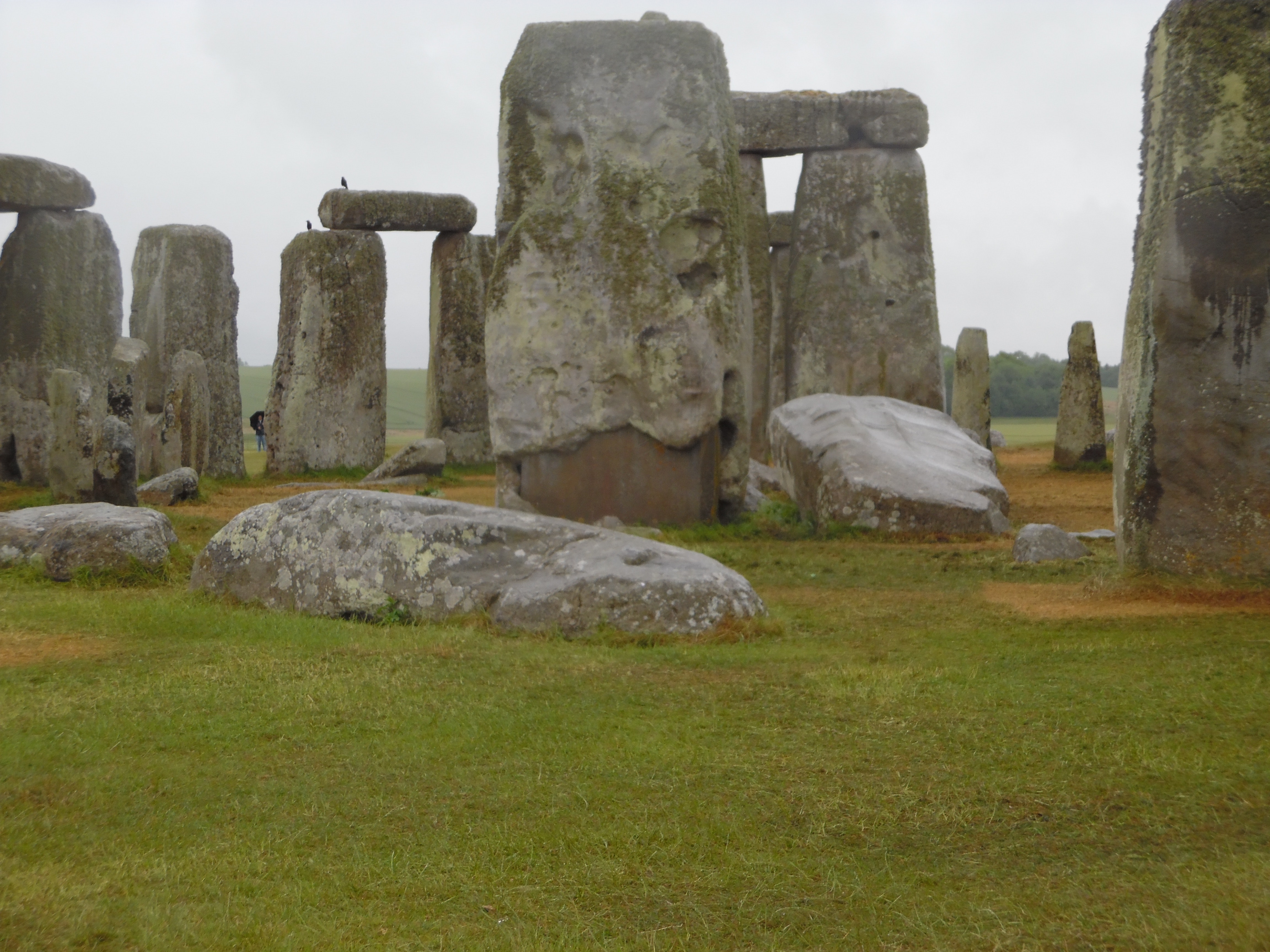 Romans placed holly near their homes to provide protection from destructive lightning strikes.  (Ironically, science now has shown that the spines of holly leaves actually do serve as lightning conductors, protecting both the holly itself and any nearby plants or structures.)  Holly branches were thought to thwart evil witchcraft and were often presented as valuable gifts to friends during winter festivals. 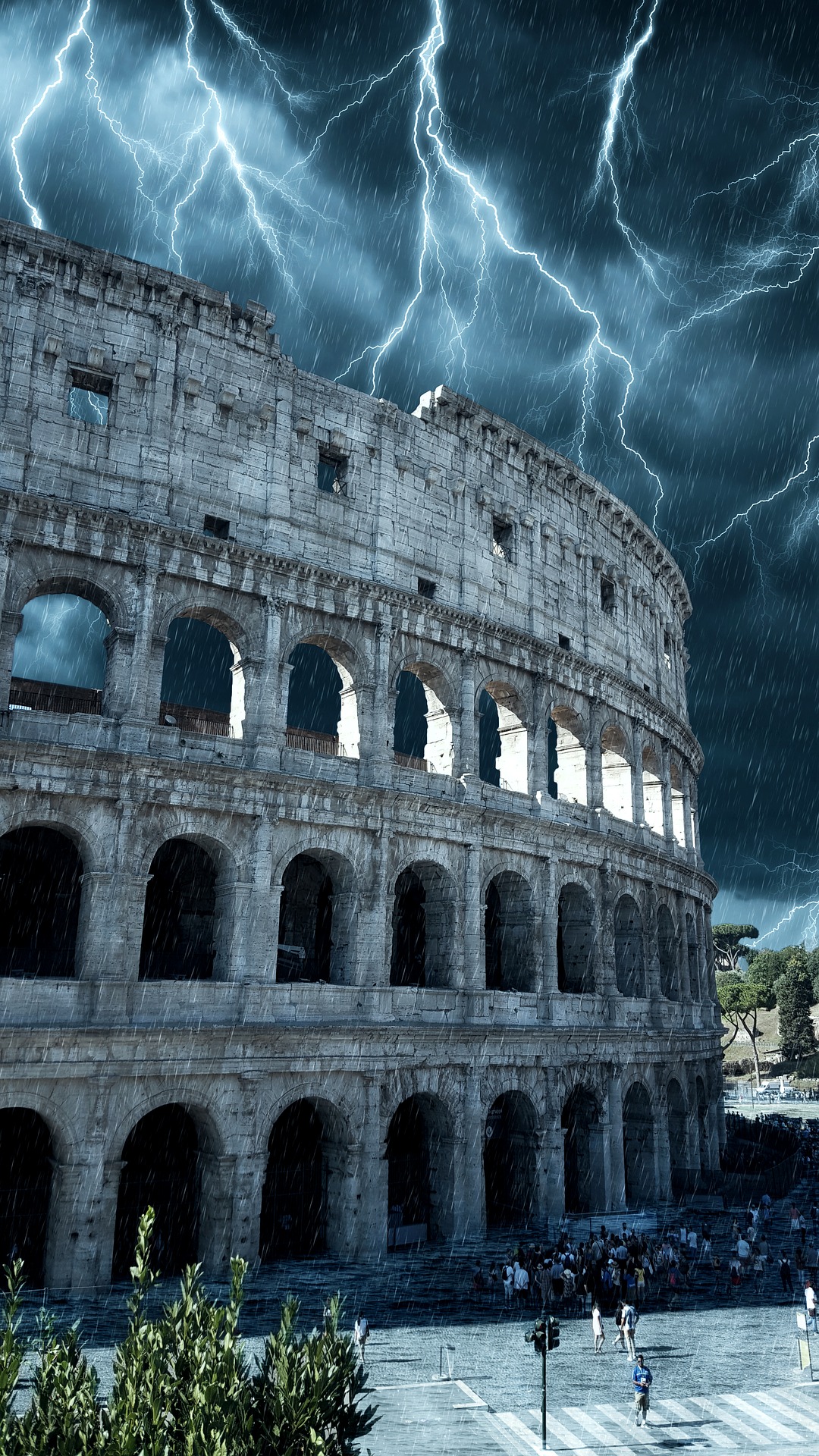 The Celts believed that the potent Holly King ruled the earth from summer until the winter solstice, that holly leaves at a doorway captured evil spirits before they entered a home and that being surrounded by holly branches protected one against brutal poisoning. Owning holly branches also assured health, happiness and fertility throughout the year. 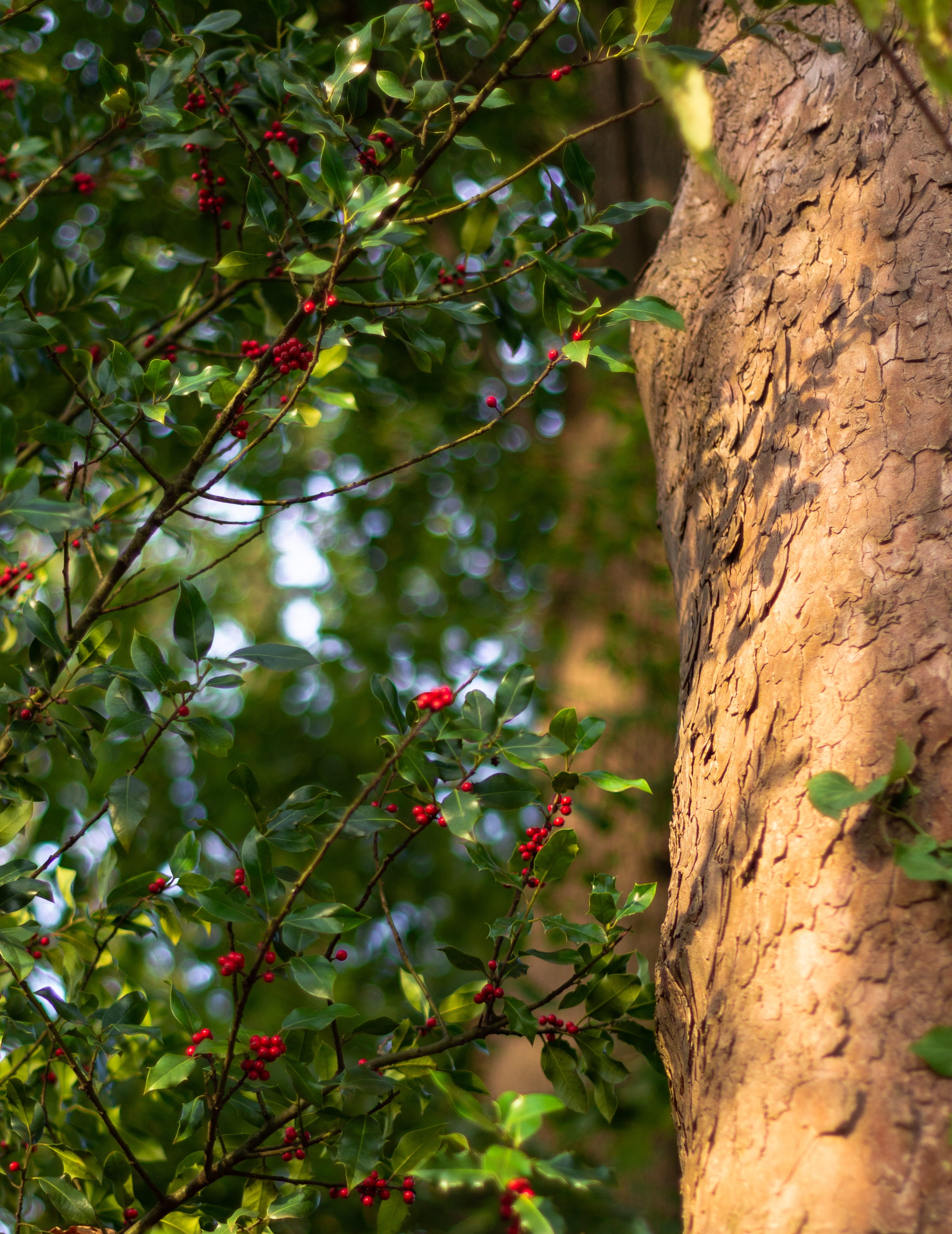 Early Christians believed that the prickly leaves of holly branches symbolized Jesus’ crown of thorns and their red berries represented Christ’s blood shed to save mankind. 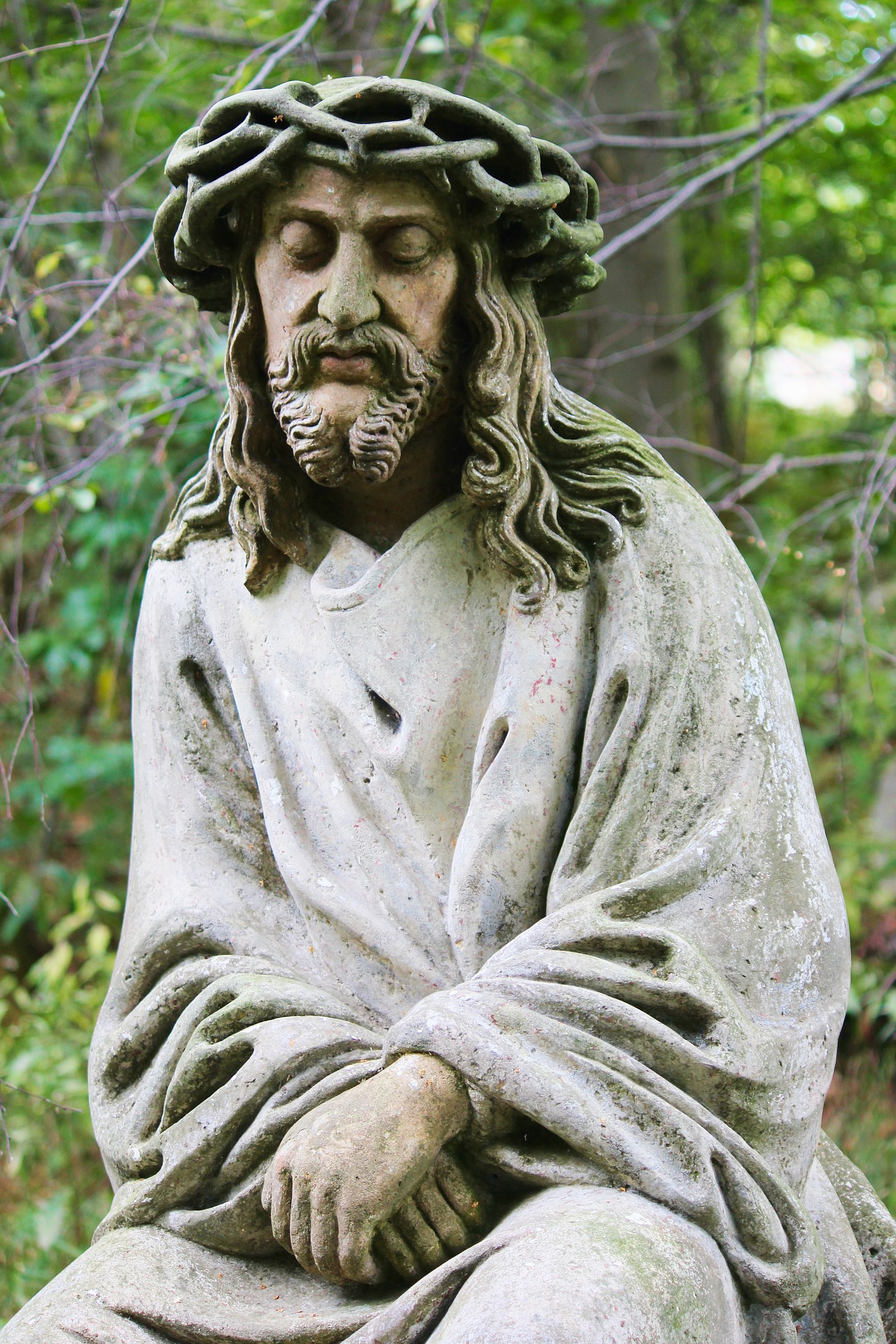 Although holly leaves and branches were liberally harvested to ensure protection from evil spirits, good luck and good health, cutting down a holly tree was an invitation for witches and evil spirits to appear and to cause disaster. Even worse, the adversity caused by the felling of a holly tree could last for years! Leaves and branches were never burned because the smoke released all the captured evil spirits, allowing them to unleash plagues and catastrophes. 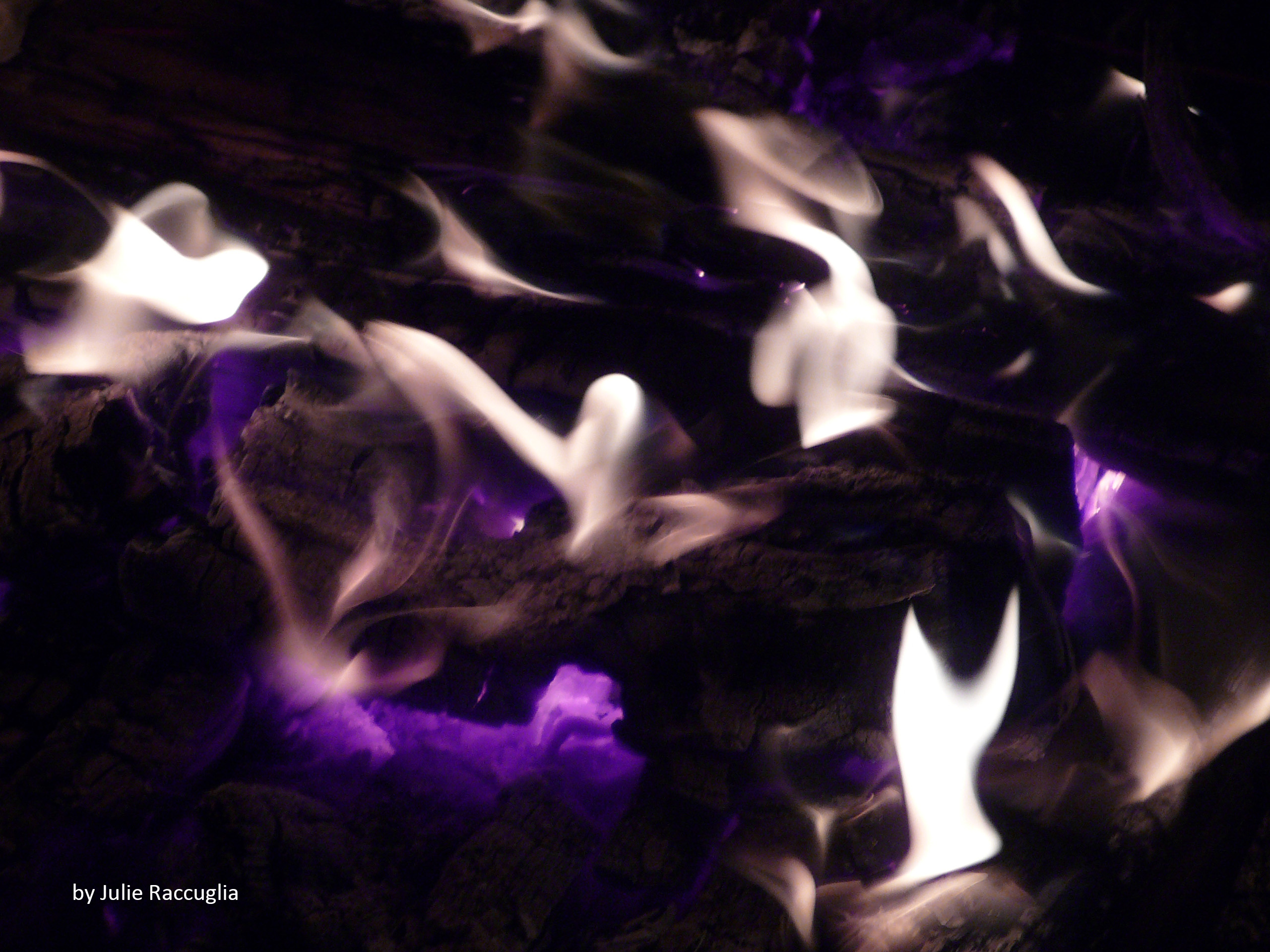 Gradually, the hardcore superstitions faded, but the appreciation of the plant did not.  By the 1800s, holly was considered the “Prince of Evergreens” and was used to decorate hearth, home and even streets. Wreaths of holly were hung on doorways, basketfuls were displayed by fireplaces and sprigs were tucked into chandeliers, window frames, vases and even kitchen crocks. No longer fearing visitation from witches, many people chose holly trees as their Christmas trees. 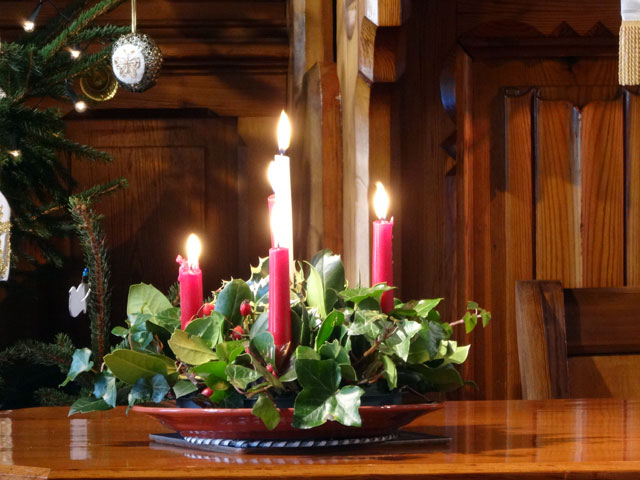 Today, the bright green leaves and shining red berries are not only a beloved element of holiday decor, but can also be a stunning addition to the home landscape. They can be excellent additions to foundation plantings, virtually maintenance free privacy screens, unique hedges or stunning specimens for focal points. Most varieties are highly resistant to insects and diseases. In winter, hollies add strong color and visual interest to an otherwise bleak landscape. 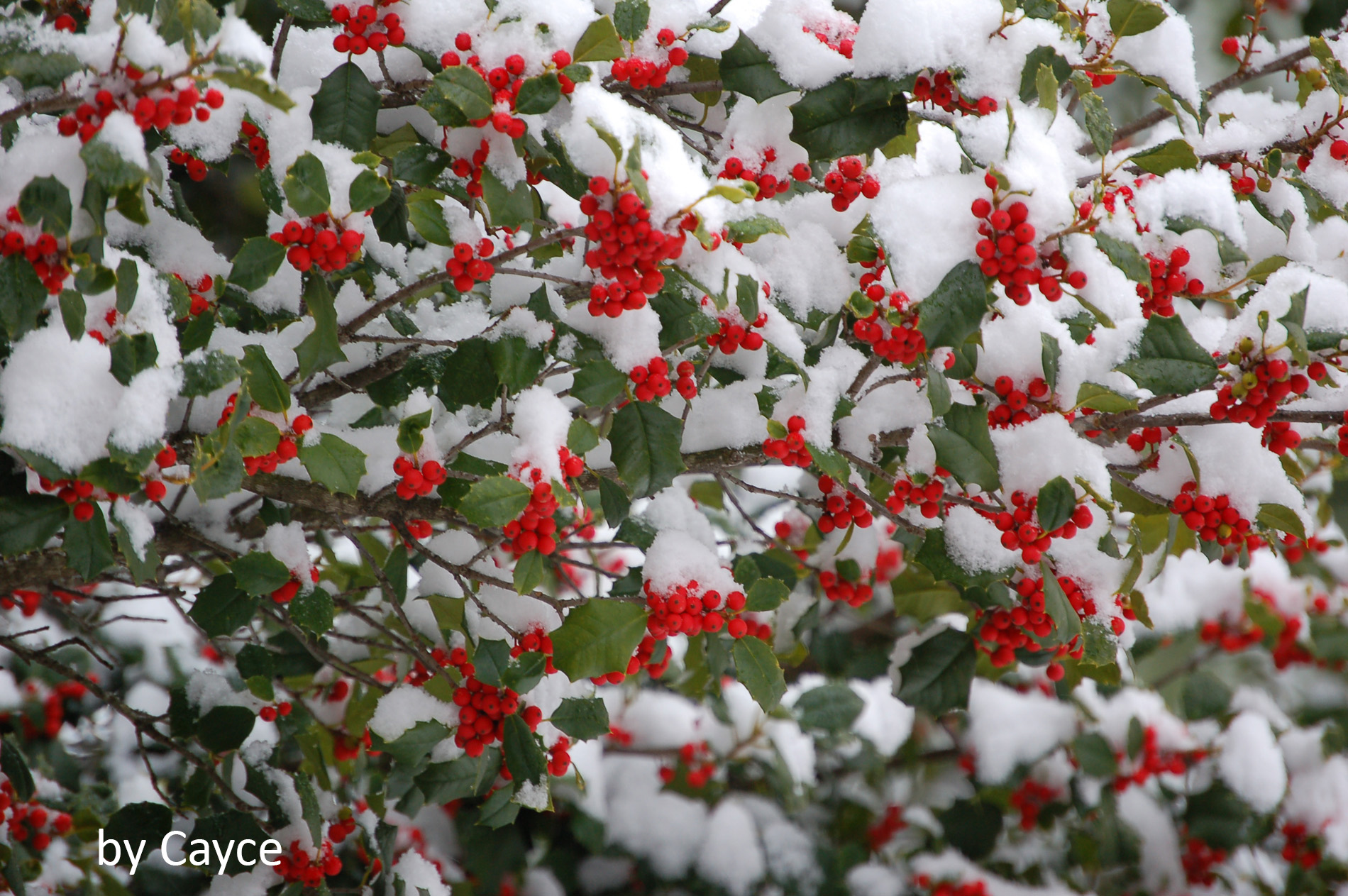 Unlike most plant genuses, hollies can be grown in every hardiness zone. Within the genus (a main category) of Ilex, there are about 500 different deciduous and evergreen species of holly plants. Some are trees, some are shrubs and some are lianas, which are the woody climbing plants that hang from trees. They vary in size — from ground covers of six inches to small shrubs and majestic trees reaching 60 or 70 feet  — as well as in shape. Some are almost flat, while others are rounded. Some are columnar and others pyramidal shaped.

Their appearances vary as well. While most varieties have dark green, glossy leaves, some have variegated leaves and some sport foliage with a faint, purplish tint. Leaf textures range from hard and spiny to soft and rounded. 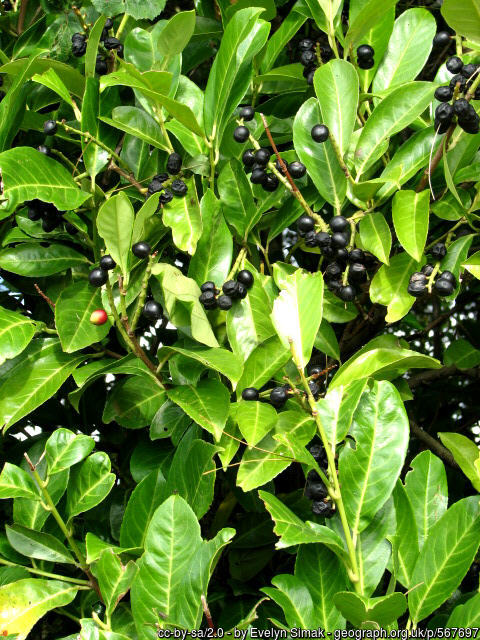 All hollies blossom in the spring and some set berries (drupes) in the fall. Their blooms tend to be small, inconspicuous (but usually fragrant) flowers that are often overshadowed by other, more colorful spring displays.

Unfortunately, having spring blooms does not guarantee that there will be berries. The vast majority of hollies are dioecious, meaning that both a male and female plant must be present and near each other to produce berries. A few cultivars are self-pollinating, but they will not produce an abundance of fruit. Berries range in color from the bright red we associate with holiday decorations to brown, black, yellow and green.

Please note that holly berries are mildly toxic to humans and can cause vomiting and diarrhea if ingested. It is important to keep the berries away from children and pets that may mistakenly consume them.

Besides being beautiful, holly plants are beneficial for wildlife. The thick foliage provides summer nesting sites for songbirds and sturdy, protective winter shelter for birds and other animals. Several species of birds are drawn to holly berries. Cedar waxwings, goldfinches, cardinals and mourning doves are just a few of the species that feed on the berries. Red foxes, chipmunks, squirrels, deer and even box turtles have been known to eat varieties of holly. 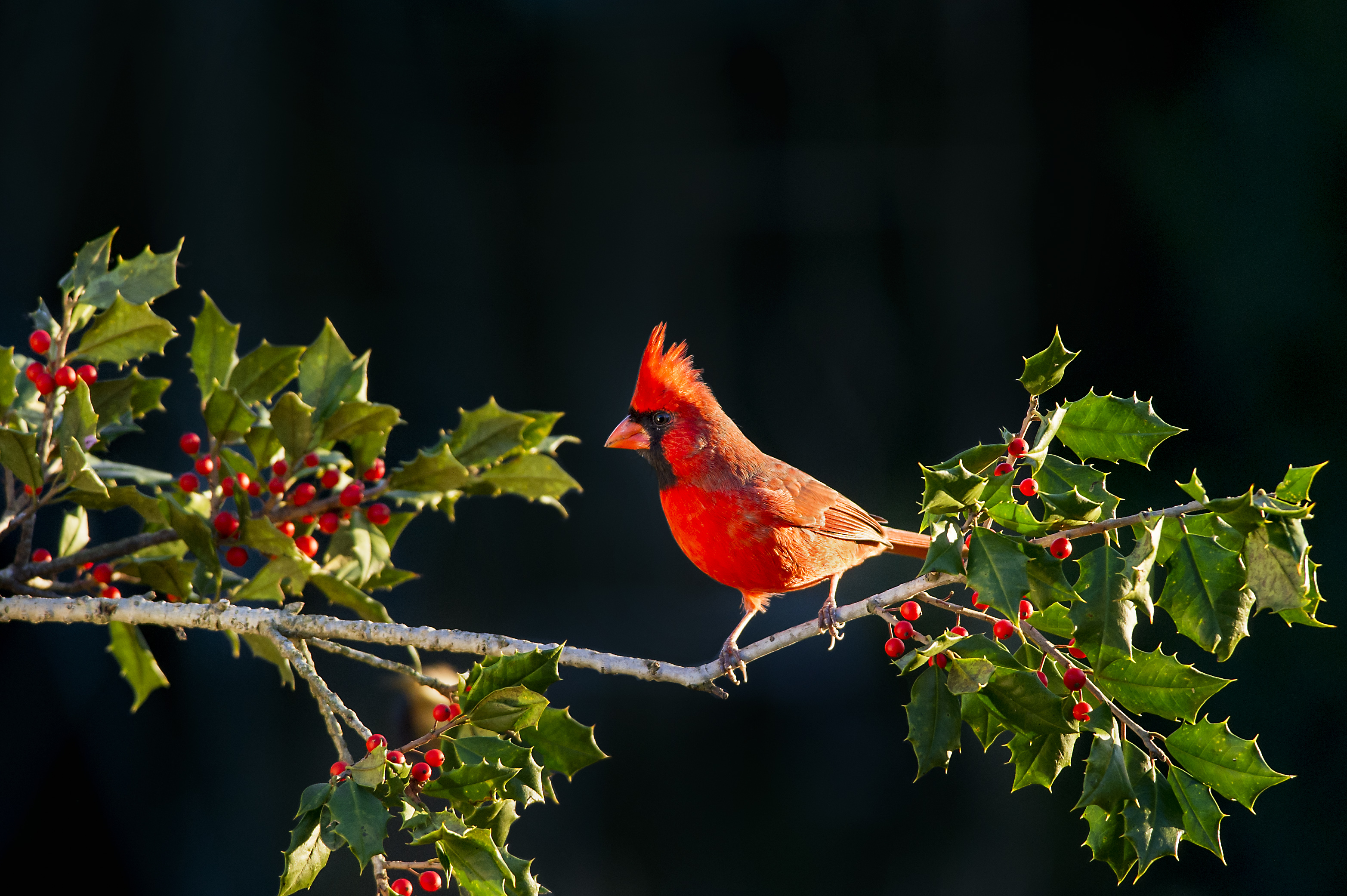 Sometimes difficult to find at nurseries, garden centers and big box stores, holly is beginning to experience a resurgence in popularity and is becoming more available. With its beauty and its benefits, holly is a plant worth searching for!

Thanks for joining us this year on our horticultural journey.  We’ve enjoyed our time with you.  See you in 2020.