Why Every Garden Needs A Frog

I found my three-year-old granddaughter standing by the window yesterday, sobbing her heart out. When I asked her what was wrong, she pointed a quivering finger at the pond and did that “hiccuppy” thing heartbroken children do. 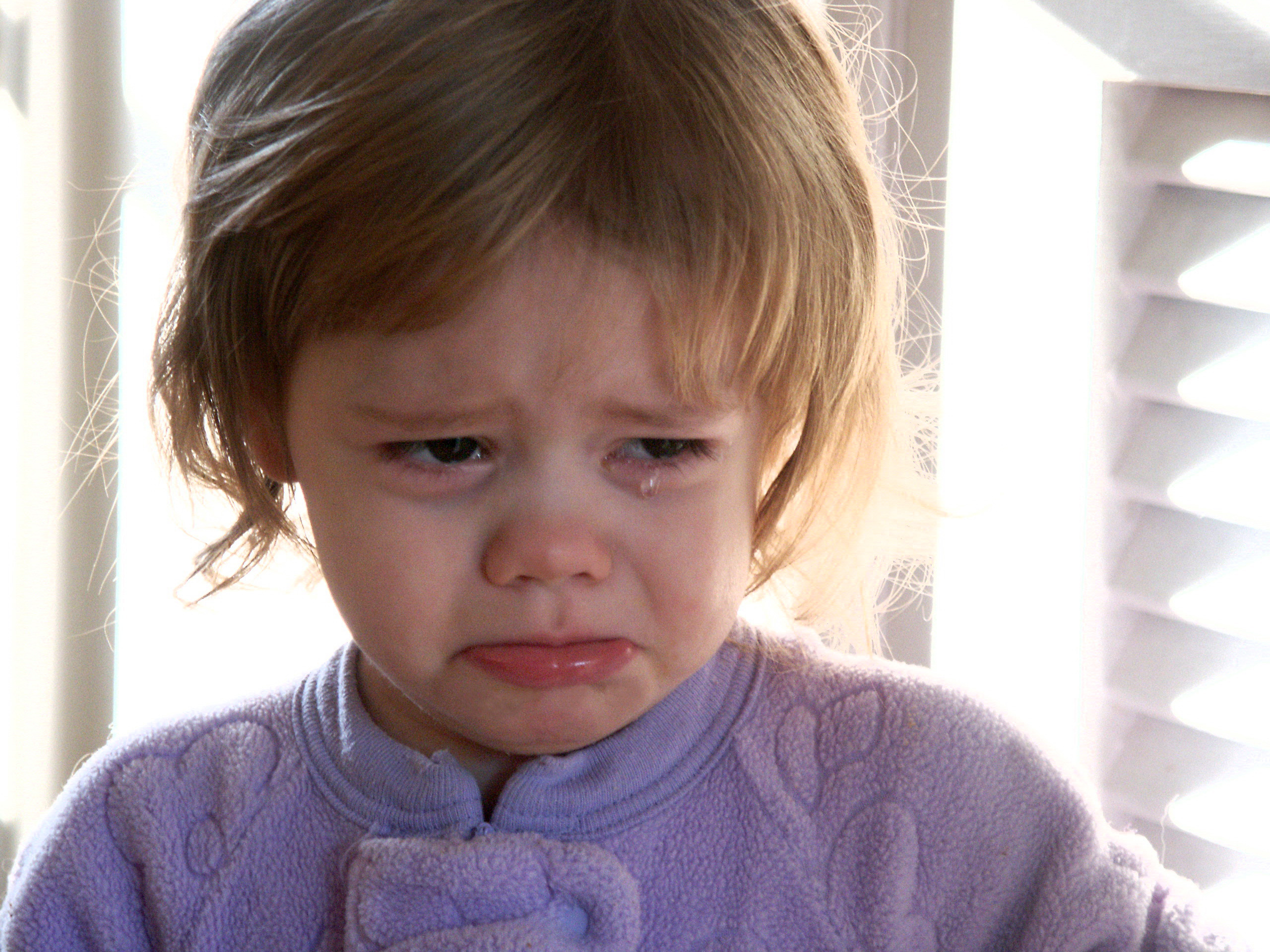 Eventually she sputtered out that the frogs in my pond were too cold and she wanted to bring them inside where it was warm. I managed to convince her that the frogs were just fine and that they needed to be in the pond, but the whole time there was a little voice in my head accusing me of blatantly lying to this tender-hearted child. The reality was that I had no earthly idea what frogs do during the winter – or if they were even still alive.

As soon as she left, I dug in to find out the truth about frogs –  and toads  – in the garden.

After lots of reading and YouTube video watching, I have a new appreciation for these amphibians that 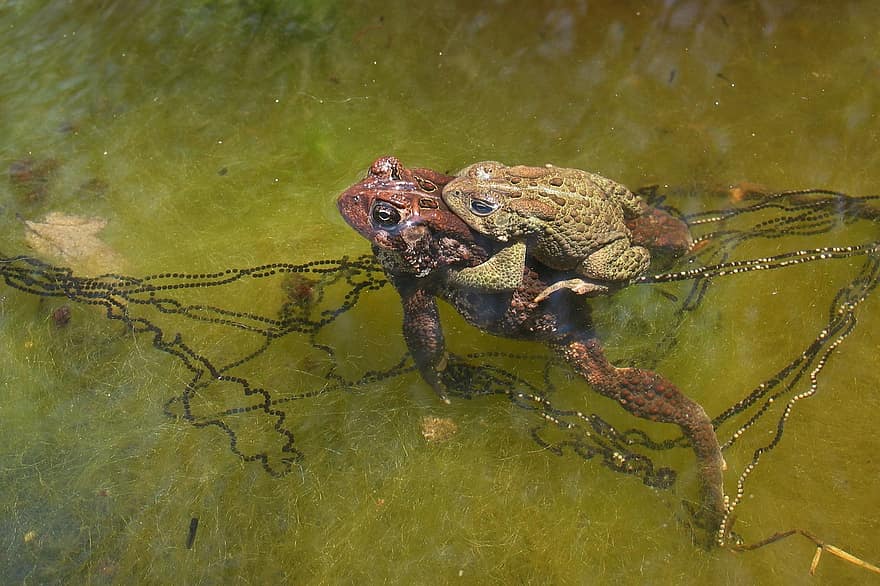 invaded my pond and the surrounding landscape last year. I soon   realized that they not only are a delight to watch and listen to, they   are true assets to the garden and to the planet. I wish I had known all of this before!

The first thing I found were some basic facts about frogs and toads.   (I’m sure that somewhere along the lines, a dedicated science teacher tried her best to teach me all of this, but I probably tuned her out. My sincere apologies…)

Frogs and toads are amphibians, which means that they are small, cold-blooded vertebrates (animals that contain a backbone or spinal column) that need appropriate temperatures and adequate moisture to live. Most frogs and toads begin their life cycles as clumps of hundreds of eggs laid on vegetation just below the surface of quiet, shallow water. 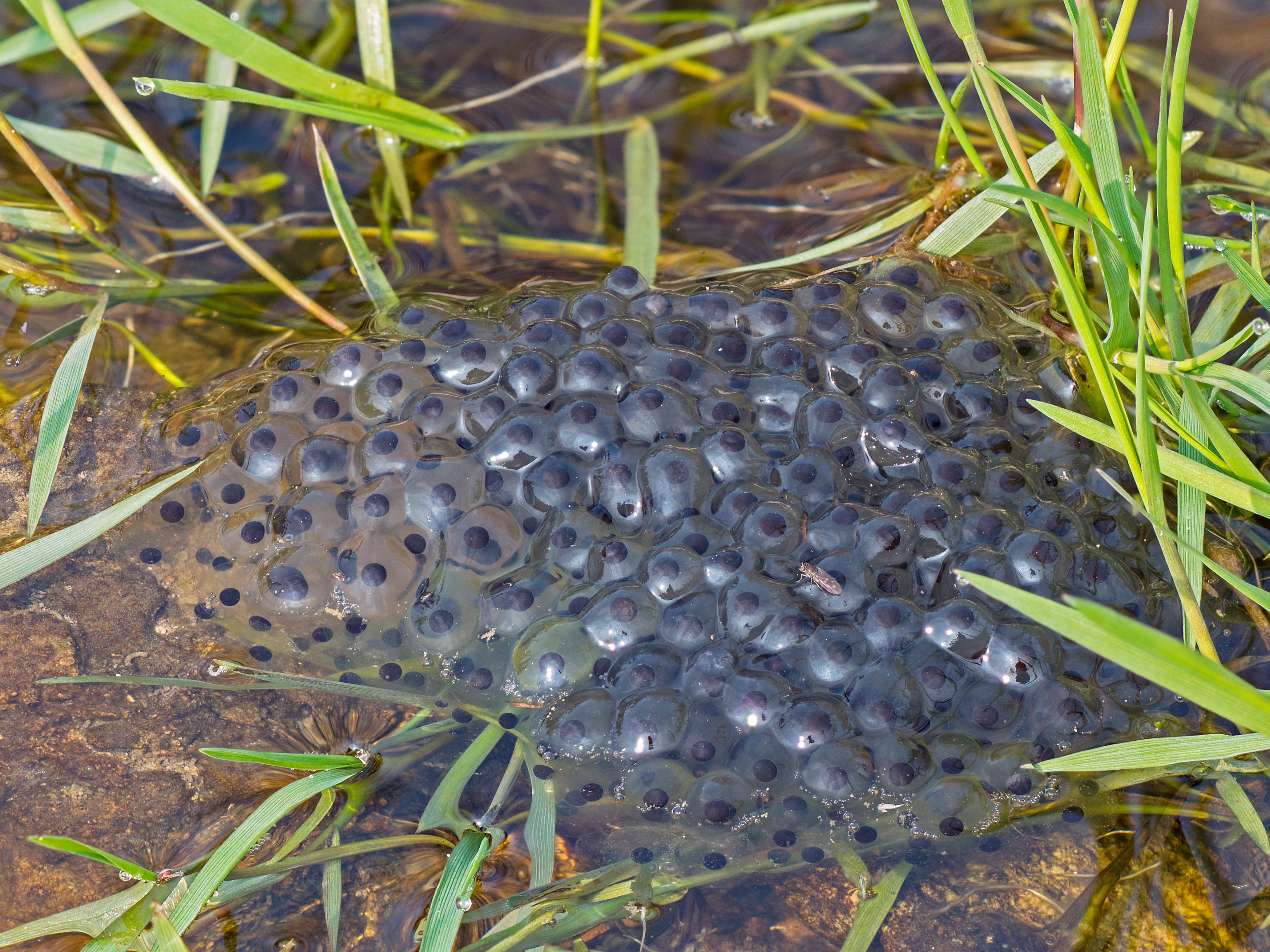 Frogspawn tends to form round clusters of eggs in the water, while toadspawn forms long ribbons of eggs. Both frogspawn and toadspawn hatch as tadpoles, the larval stage of their life cycles. Although they are essentially the same, frog tadpoles tend to be longer and slimmer while toad tadpoles are shorter and chunkier.

Typically it takes about 14 weeks for the tails and gills of both frog and toad   tadpoles to disappear and for them to develop back legs, front legs, lungs and   eardrums all of which allow them to live on land as well as   the water.

Interestingly though, under the right conditions, tadpoles   can delay   their metamorphosis up to a year. Most of the time however, the transformed   tadpoles seek land after the usual 14 weeks. Both frogs and toads need adequate  shade and moisture so they don’t dehydrate.

The average lifespan of a frog or toad here in the midwest is about 7 or 8 years. Each winter, as temperatures dip towards freezing, frogs and toads begin preparing for a long rest by getting ready to hibernate. Some burrow deep into the ground or under piles of fallen leaves and brush, while others, those who are aquatic, dive to the bottom of their watery home. 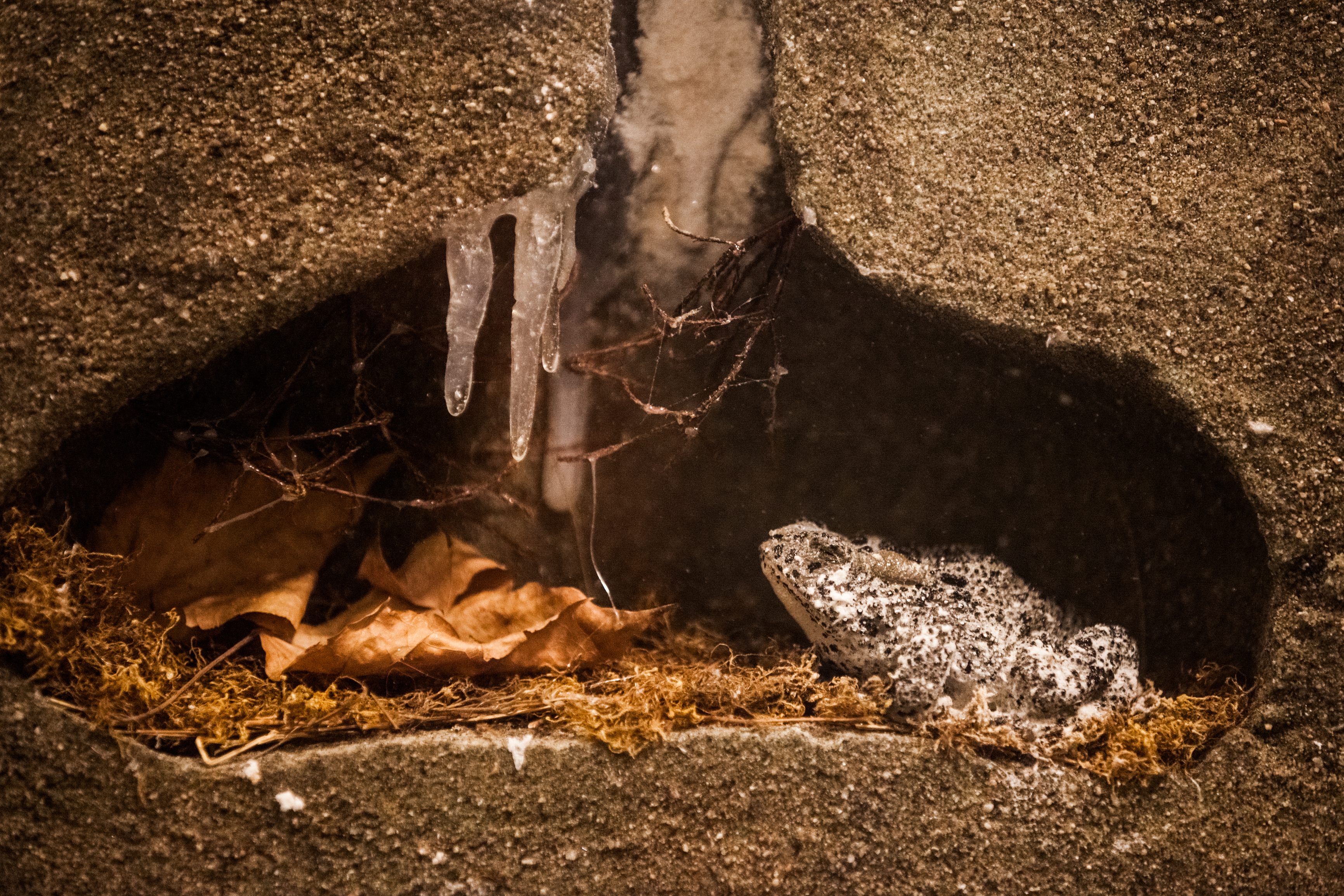 Since amphibians are cold-blooded, the body temperatures of frogs and toads may also drop to freezing or below which means that they may appear to freeze solid. However, high glucose levels in their systems act as anti-freeze and prevent ice crystals from damaging any major tissue. Once temperatures begin to warm,  frogs and toads begin to thaw and resume their normal amphibian activities. 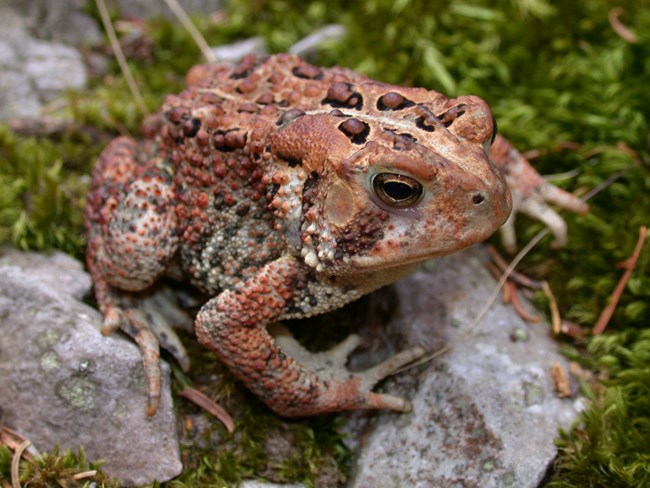 (Bouts of   unseasonably warm weather that awaken them before a true spring, like we   have been experiencing the last few years, are catastrophic for the   amphibian population since they cannot usually return to a hibernating state quickly enough. Over 168 species have disappeared and 43% of amphibian   populations have declined in the past twenty years. Worldwide, 200 species   of frogs are extinct.)

Because they are so similar, it can sometimes be difficult to decide whether you are seeing a frog or a toad hop by. There are a few characteristics however, that help to distinguish frogs from toads.

Frogs are aquatic, living the vast majority of their lives in the water; toads live on land, but near water. Frogs have smooth, slimy skin and round bulging eyes; toads have dry, bumpy skin and small eyes. Frogs have narrow bodies with long rear legs; toads have a rounder shape and shorter legs. Frogs hop. Toads run. They have voracious appetites.

Both frog and toad tadpoles are primarily algae eaters, although if they get hungry enough, tadpoles have no problem eating each other.  Once their metamorphoses are complete, then their diet changes. Frogs   and toads are carnivorous creatures, 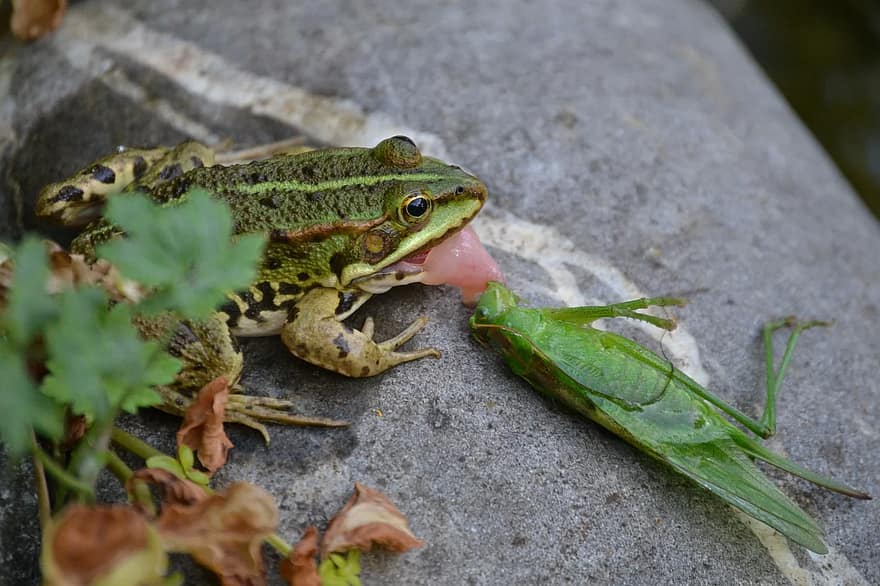 consuming a wealth of   nuisance (and potentially harmful) insects such as mosquitoes, flies, caterpillars, beetles and even cockroaches. As adults, these common amphibians can each eat up to 10,000 insects per season, making   them an outstanding form of environmentally friendly pest control.

Frogs and toads also serve as important bio-indicators, often signaling environmental problems even before they become readily apparent to the human eye. 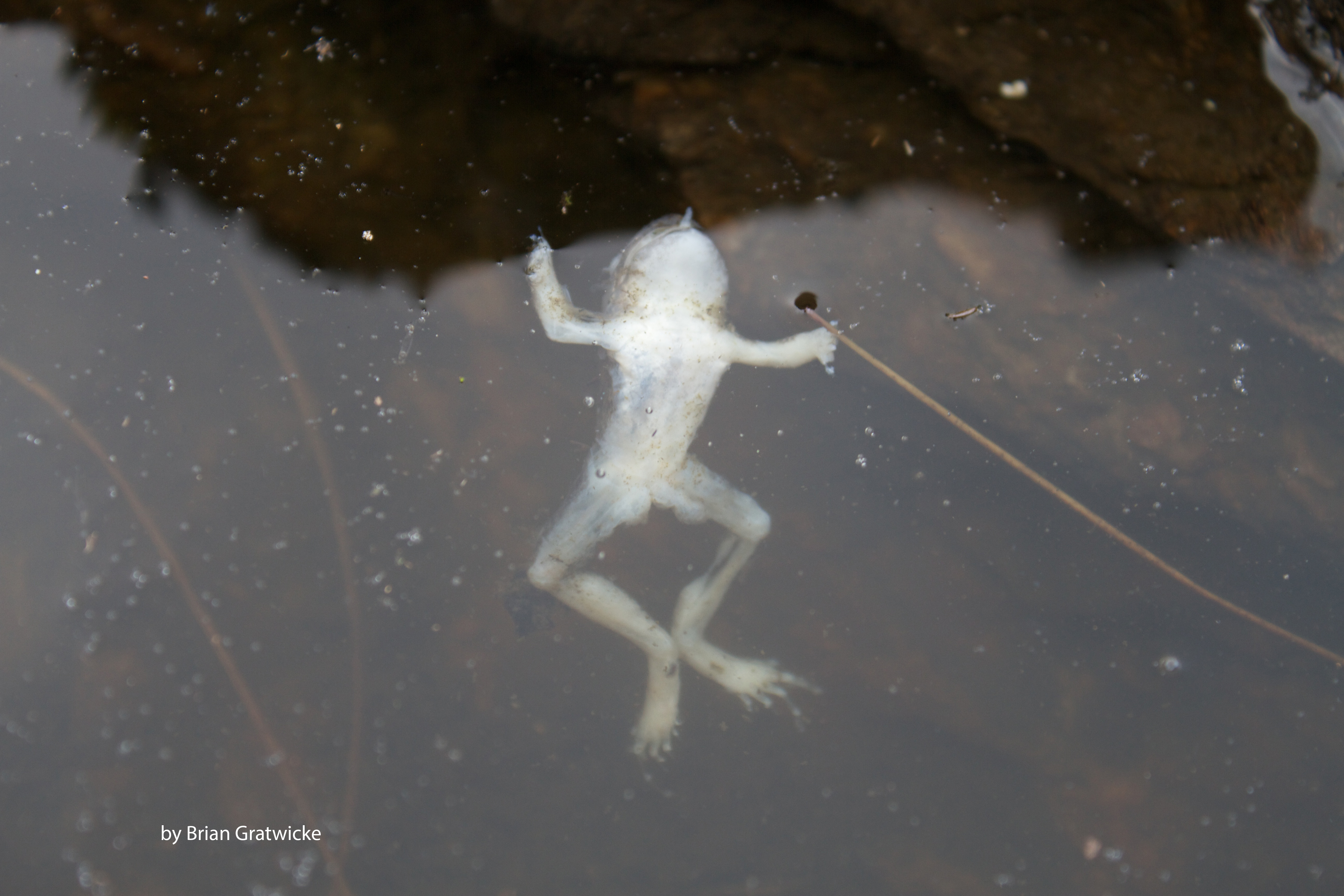 Since their thin skin can quickly and easily absorb pollutants from both the air and water, an area bursting with populations of frogs and toads means that the environment is healthy. There are no harmful toxins present,  and there is enough vegetation to encourage prey and to provide cover from predators. If frogs or toads begin to leave an area however, that indicates something is wrong and it’s time to take a serious look at the existing conditions. Scientists know that the departure of frogs often signals some form of chemical pollution in the air or water system.

The importance of frogs and toads doesn’t stop there. Even their voices  –     or rather the absence of their voices – relay important messages to us. Frogs   are especially aware of noises and will immediately go quiet if they hear any   sounds or pick up on an unfamiliar presence near them. Female frogs mate   because they are attracted to the sounds the males produce. (We've included a bit of frog conversation here. To return to text, use the back arrow.) http://theworldofrogs.weebly.com/uploads/3/0/6/2/3062899/hyla_arborea.wav  Researchers suspect that noise pollution,

a largely ignored problem of modern life, is not only getting in the way of frog romance, but also increasing frog stress levels. Increased stress hormones in frogs has been proven to lead  to a decline in their immune defense systems against bacteria and fungus. (Interestingly, exposure to repeated noise pollution also increases stress hormones in humans.)

Last year, the grandkids and I spent the season getting a kick out of chasing the frogs and toads hopping around the garden. This year I’m going to be grateful for a habitat healthy enough to support these remarkable creatures. 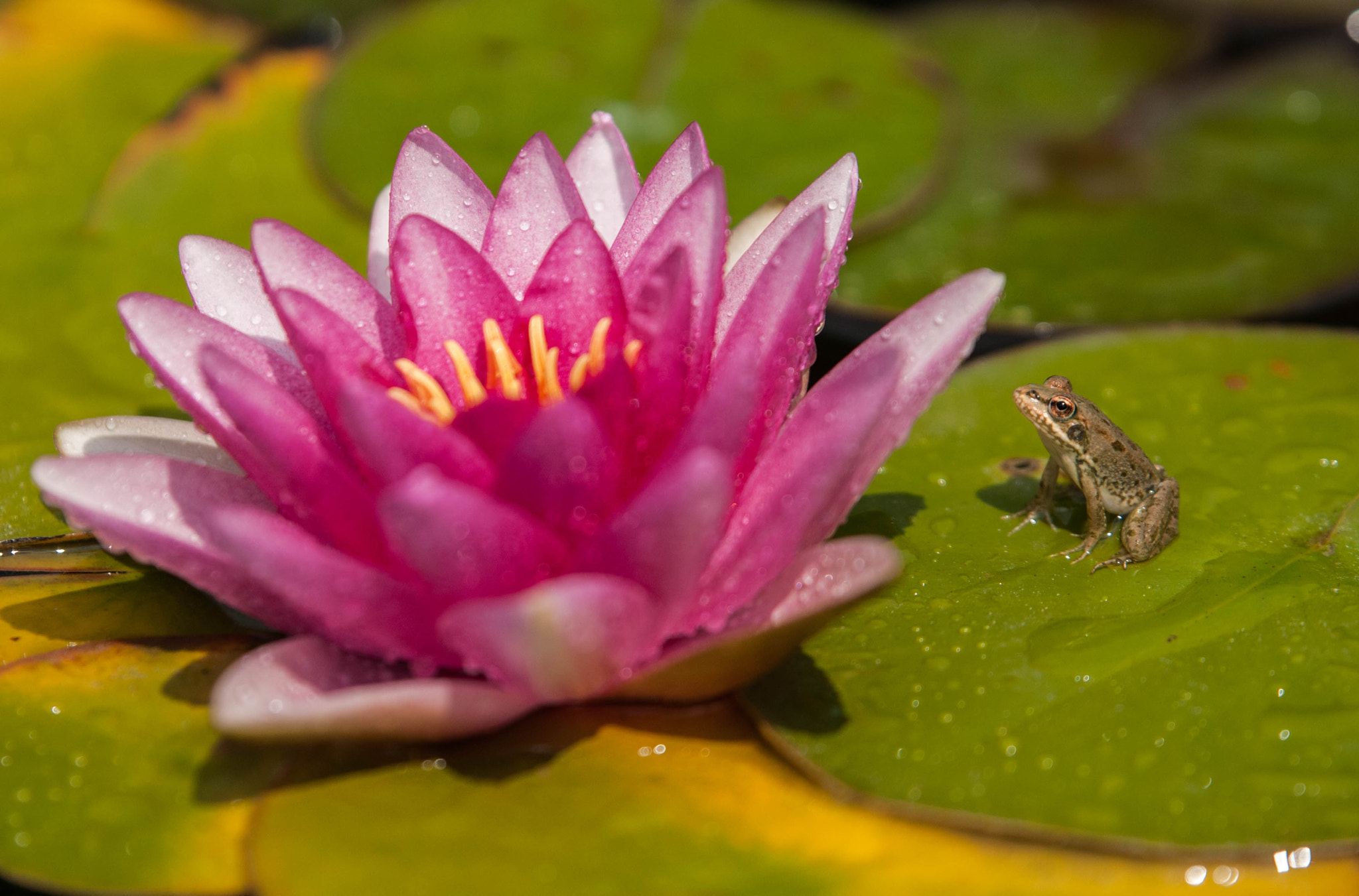