When we lived at the lake, I was used to dealing with wildlife, especially deer. We had a home situated in the middle of their natural habitat so it only seemed fair that they shared in my garden bounty. (Of course the fact that my neighbor consistently set out salt licks didn’t help the situation much ) Here, we live in the middle of town —in fact, we are just a few blocks from our thriving downtown— and we are on the way to a popular walking and biking path. Since there is a constant stream of people and dogs, I assumed that critters would be the least of my worries; I was actually more concerned about trash and vandalism. 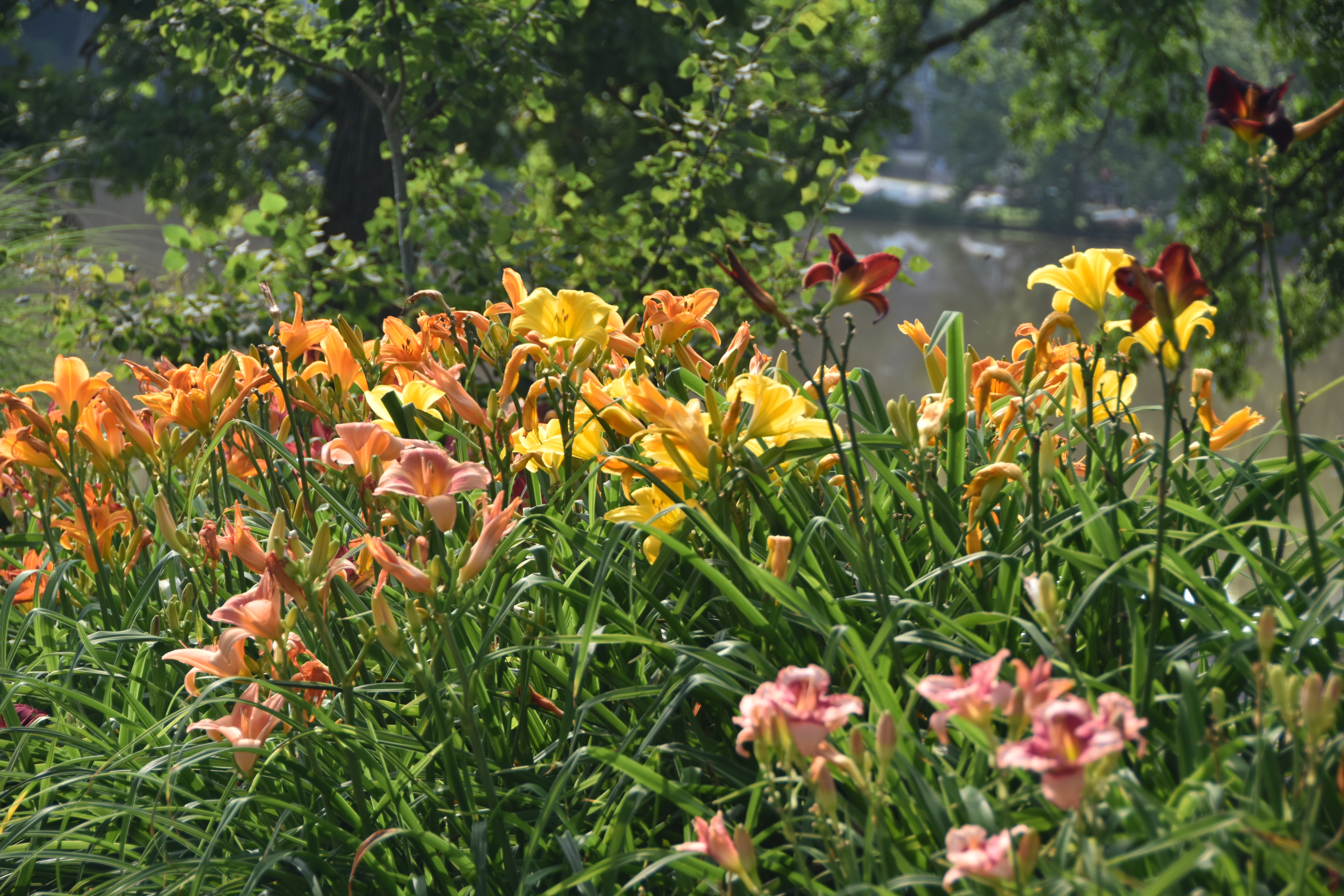 My neighbors, a sweet retired couple, warned me about the deer when they saw me planting my hostas and daylily beds, but I was sure that they were exaggerating the problem. I honestly thought that planting near the front of the house and  next to the back deck would repel deer and other nuisance animals. When I explained why my gardens would be fine, they just gently smiled at me and kept hanging their snow fencing around everything. 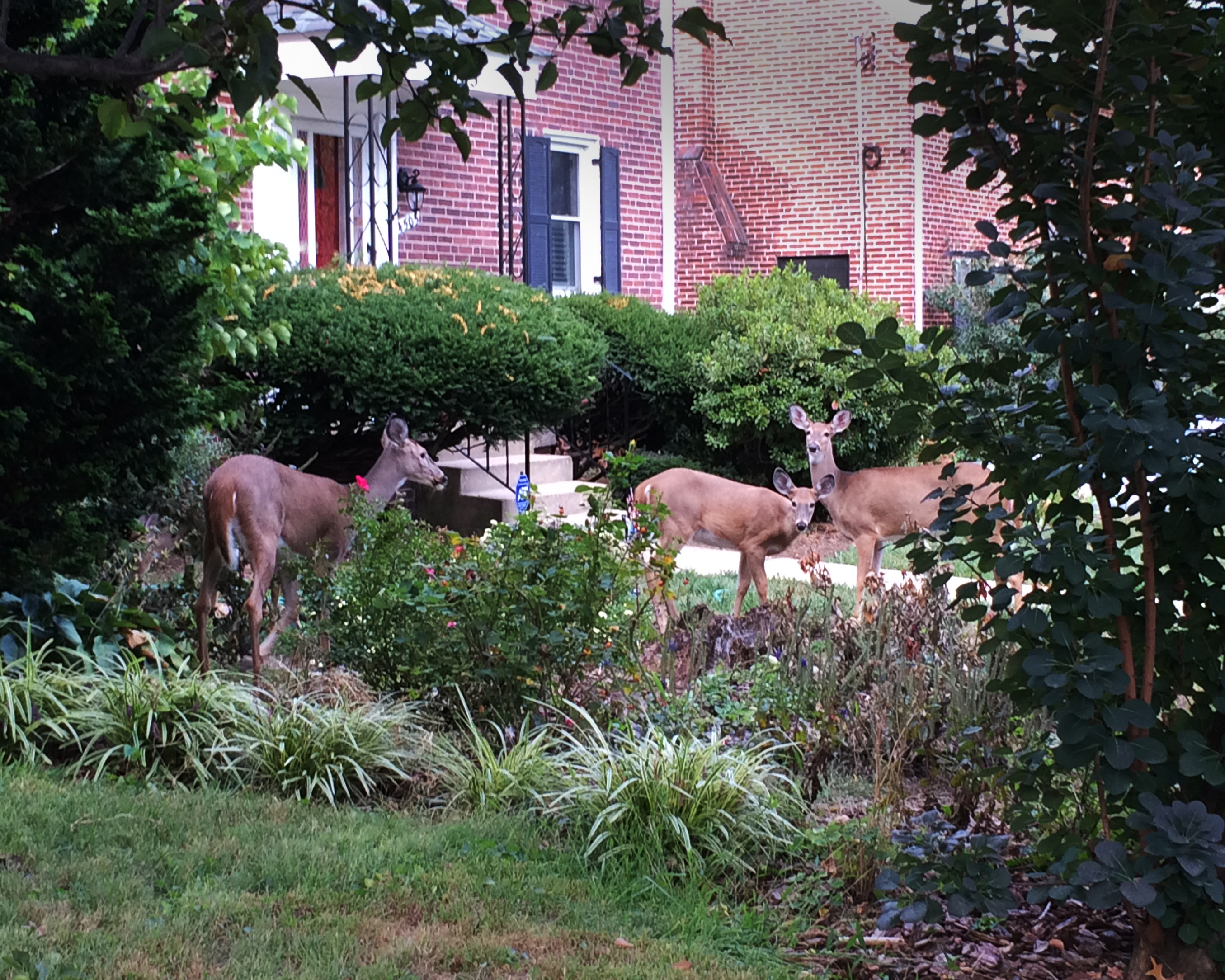 Imagine my surprise (and total embarrassment) when I glanced out the kitchen window just a few days later and saw a deer not two feet from my front door contentedly munching away on my hostas. With a sick feeling in my stomach, I rushed to the back door and found every one of my hybrid daylilies had been stripped bare of all of their blooms. That green snow fence next door suddenly looked really attractive, and I understood the meaning behind those smiles.

Snow fencing can be used to deter deer.

Green snow fencing became a standard feature in my yard; I figured out how to cover almost everything with it. I have to admit that it was a little difficult to see any blooms through the fencing, weeding was nearly impossible and picking tomatoes was a true challenge, but at least I knew that my plants were safe from deer. I felt vindicated but not certainly victorious.

This summer I’m hoping to improve both my garden’s appearance ( no green snow fencing anywhere)  and its success rate (actually seeing my plants in bloom) by starting out with a workable plan to keep the wildlife under control. I feel like I am better prepared to deal with my groundhog (see last Tuesday’s blog),but now I need to focus on learning more about other animals, especially deer. 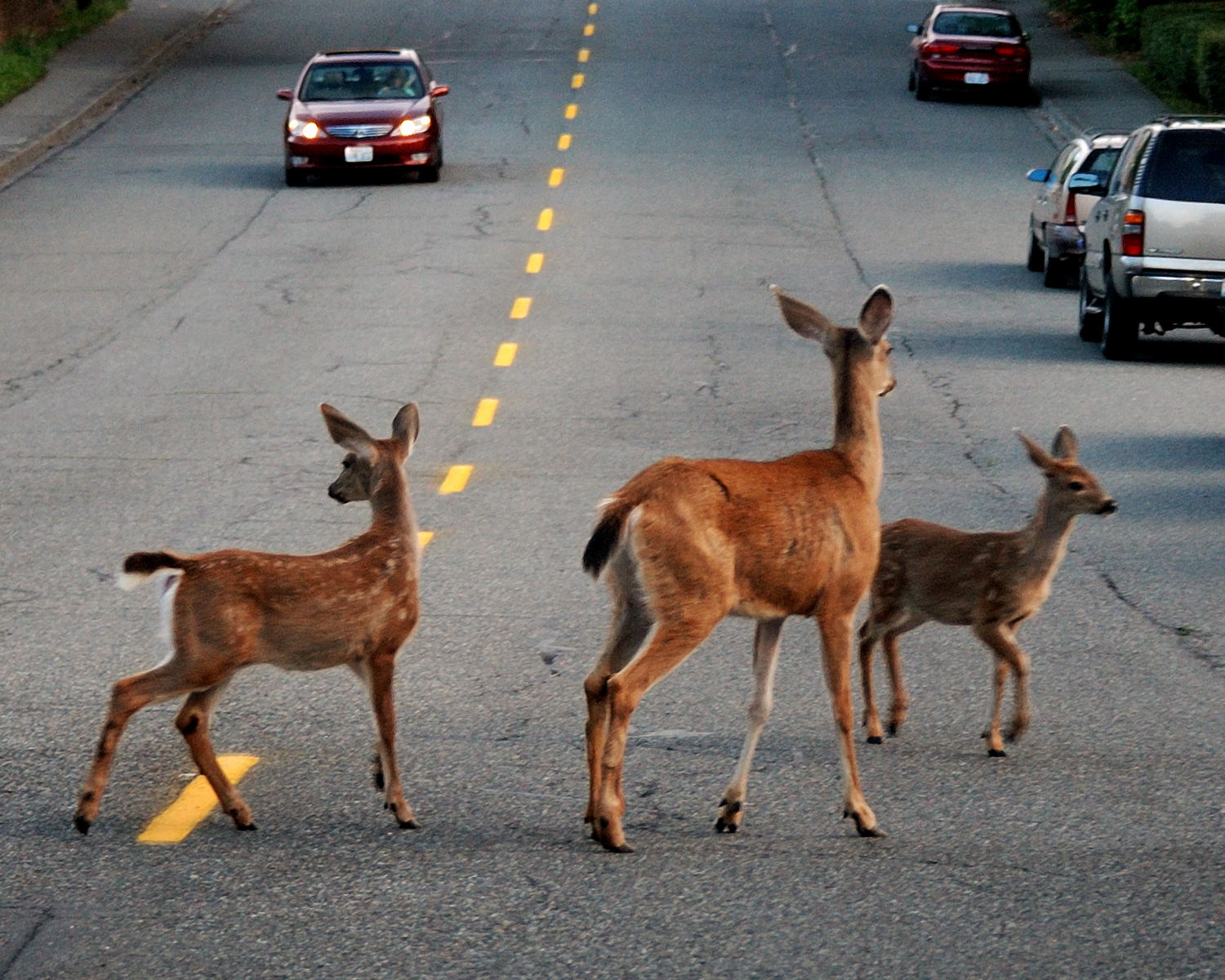 In Missouri alone there were over 4,000 vehicular accidents involving deer.

The Missouri Extension Services most recent publication puts our white tailed deer population at about 1.4 million across the state, with the majority living in the central to northern part of the state. Because of a lack of natural predators and an abundance of food sources, white tailed deer have adapted well to city life and their numbers are increasing exponentially. With the increase in numbers comes an increase in the number of deer-related problems such as vehicle related accidents and damage to the landscape. According to the latest data released by the Missouri Department of Insurance, there were almost 4,000 deer related vehicle accidents in 2016. The number of accidents is expected to increase.

White tailed deer, like groundhogs, live in wooded areas that are close to open grazing areas.They are browsing animals and in the wild, feed on the leaves and twigs of woody plants, weeds, some types of grasses, nuts and fruits. Depending on the time of year, deer eat from 4 to 7 times a day and consume an average of about 7 pounds of food per day. 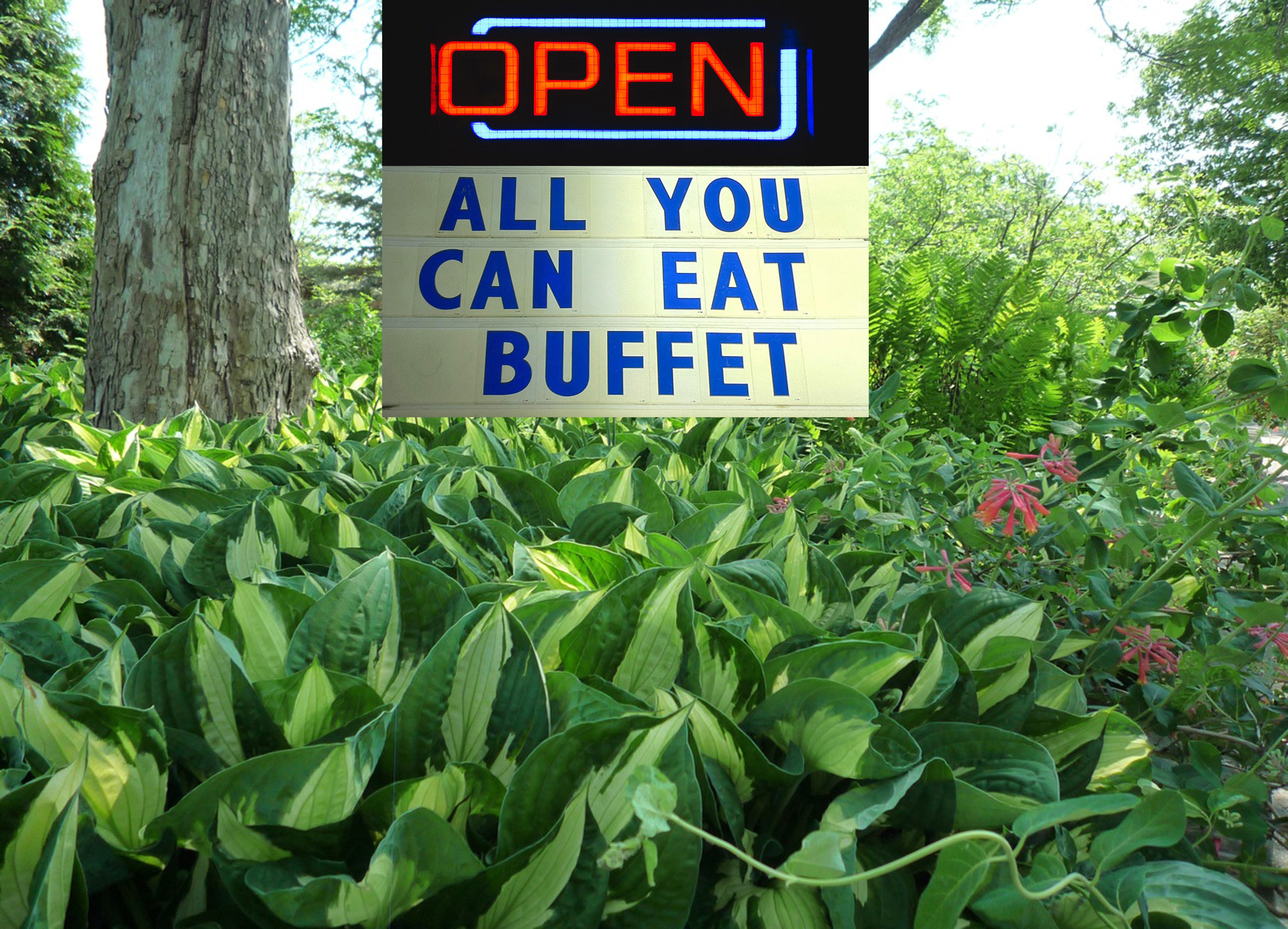 A well landscaped yard can become a deer buffet.

White-tailed deer in urban areas, while still eating up to 7 pounds of food per day, have developed a much more refined appetite than their rural relatives. Although they will still eat leaves, twigs and grasses, urban deer seem to prefer to feast on tender, succulent ornamental plants. A well-landscaped yard can become a deer’s favorite buffet restaurant. Once a deer identifies a safe, well-stocked feeding area, it will return there to dine over and over again. In fact, if undeterred, a whitetail deer will not just eat the flowering plants, but can also damage trees and shrubs and quickly destroy a landscape. 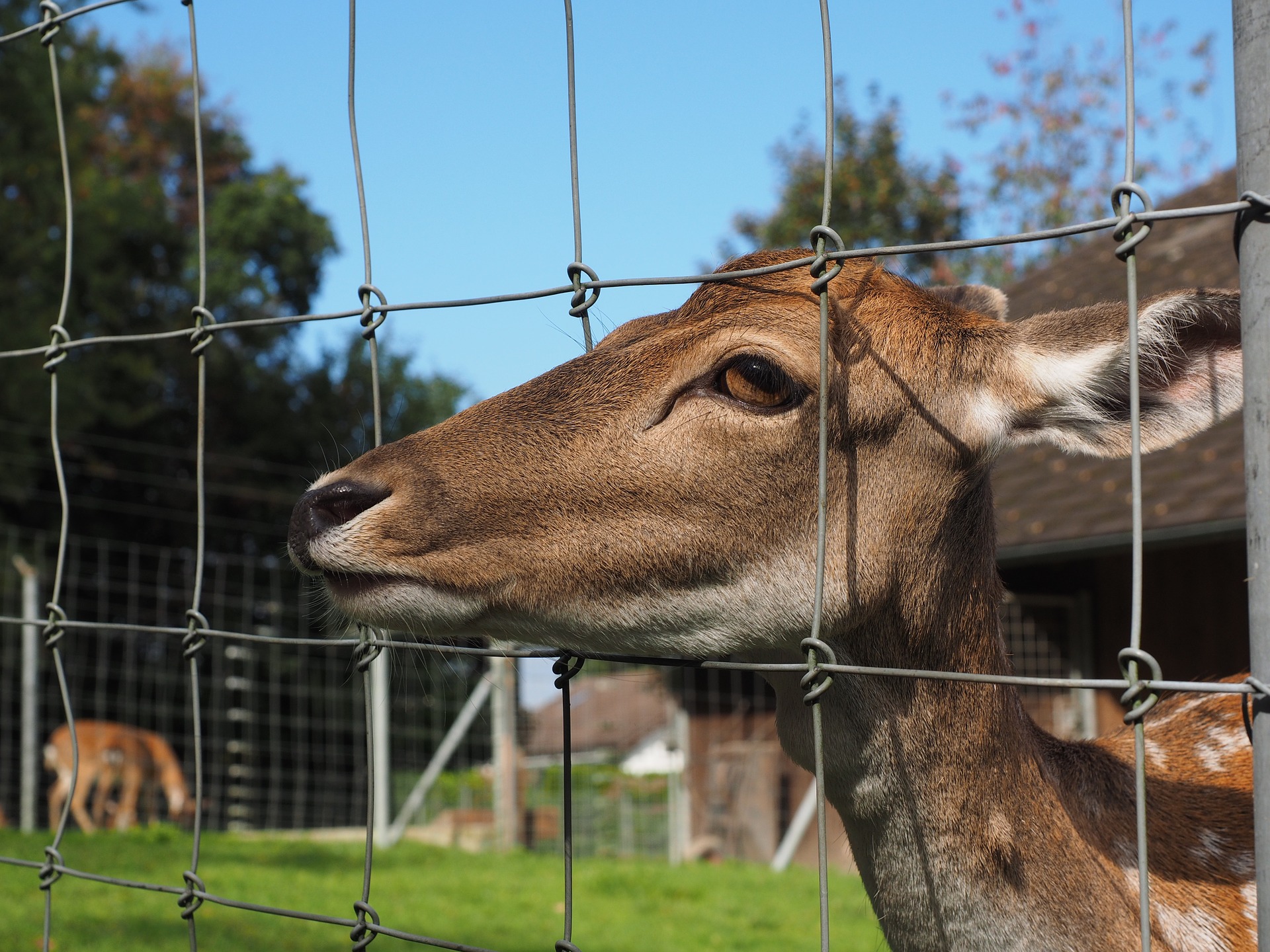 Fencing can be an effective way to keep deer from grazing in your yard.

Deterring deer is not an easy task; the options for control are limited. For a smaller area, fencing is one of the most effective, but expensive options. The fence needs to stand at least 6 foot tall since deer are jumpers. (Eight feet is even better.) Either wood  privacy fencing or wire mesh fencing can block deer. Adding an electrified line at the top of a wire fence gives another level of protection against deer but can be dangerous for children and other beneficial animals. Check city codes before installing electric fences.

Repellents, both commercial and natural, are another commonly attempted solution to the deer problem. Repellants tend to have either foul odors or foul tastes that are meant to drive away the deer. Unfortunately, the results are mixed and often dependent on the weather.and the taste buds of each individual animal. Some repellents are washed away by rain and snow and need frequent re-applications. Others need moisture to be activated. Hungry deer may ignore the repellant completely in order to feed on a favorite meal. At the lake, I used milorganite to keep deer from my street-side daylily beds, not realizing the stench I was creating. Shortly after I spread it along the fence line here,  the neighbors asked if I noticed a strange smell lately.  They were concerned about a sewer problem. I have to admit that I didn’t admit I was the cause, but I did stop using milorganite.

Movement can startle deer, but they will become accustomed to it.

Deer startle easily, so scare tactics can, to a certain extent, work to chase them away. Dogs are particularly effective, but even they can’t be on “deer duty” 24 hours a day. Spinners and scare crows have limited effectiveness because deer soon learn that they really aren’t dangerous. I tried hanging cds from tree branches because I thought that the reflected light and movement would discourage them. It didn’t faze the deer a bit and I had people commenting on my unique statuary.

Changing the landscape by planting deer-resistant plants and avoiding their favorite ones is the fourth option. No plant is completely deer-resistant; hungry deer will eat whatever is available in order to survive, but certain plants seem to be universally enjoyed by white tails. Hostas, daylilies, impatience and tulips are at the top of the preferred list. Similar to woodchucks, deer tend to avoid plants with strong taste, for example some herbs, and rough leaf textures. Many of the native plants are also ignored by most urban deer. I’ve included a list of suggested ornamental and natives at the end of this post as a starting point for your planning. I have planted all of them in various Midwestern gardens and have not lost any of them to deer. My suggestion would be to experiment with them to see which ones work in your yard. 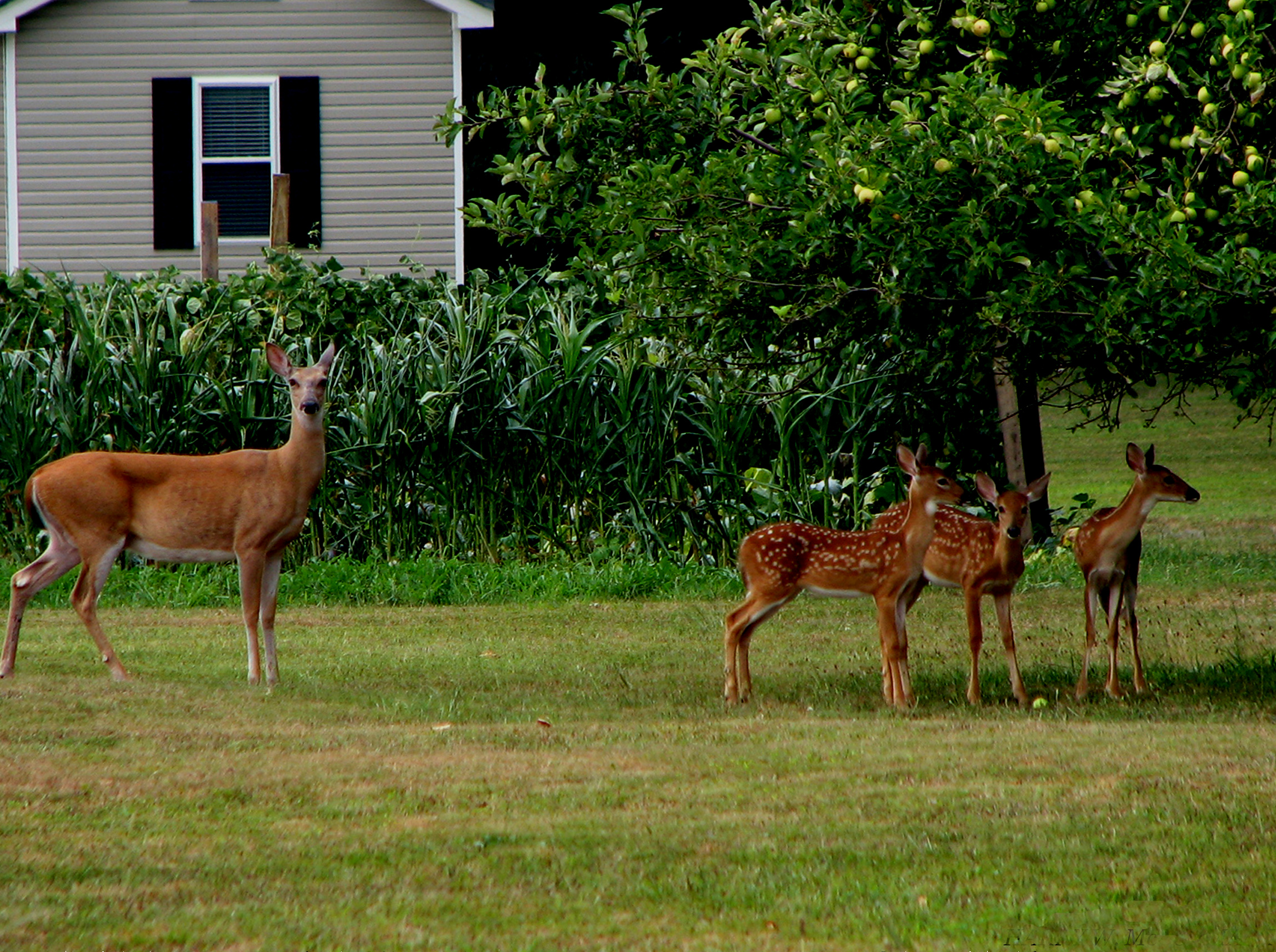 Watching deer out the window can be fun, until they devour your garden.

I know that seeing a herd of deer, especially a doe with her fawns, in the middle of the city can seem magical. That delight can quickly become a disaster though, when that same doe and her fawns begin destroying your yard on a daily basis. My advice? Develop and implement a deer-proofing plan now. 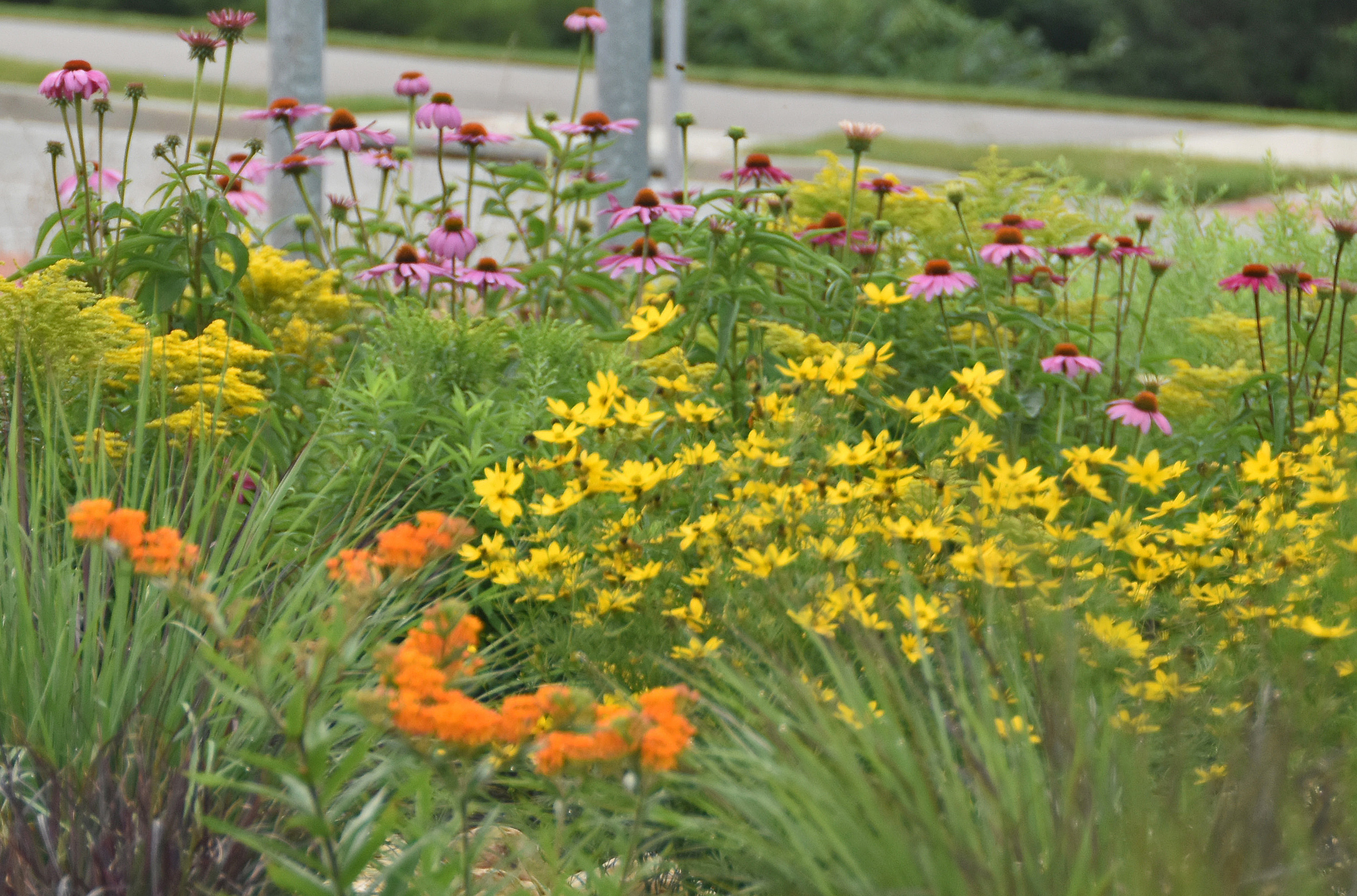 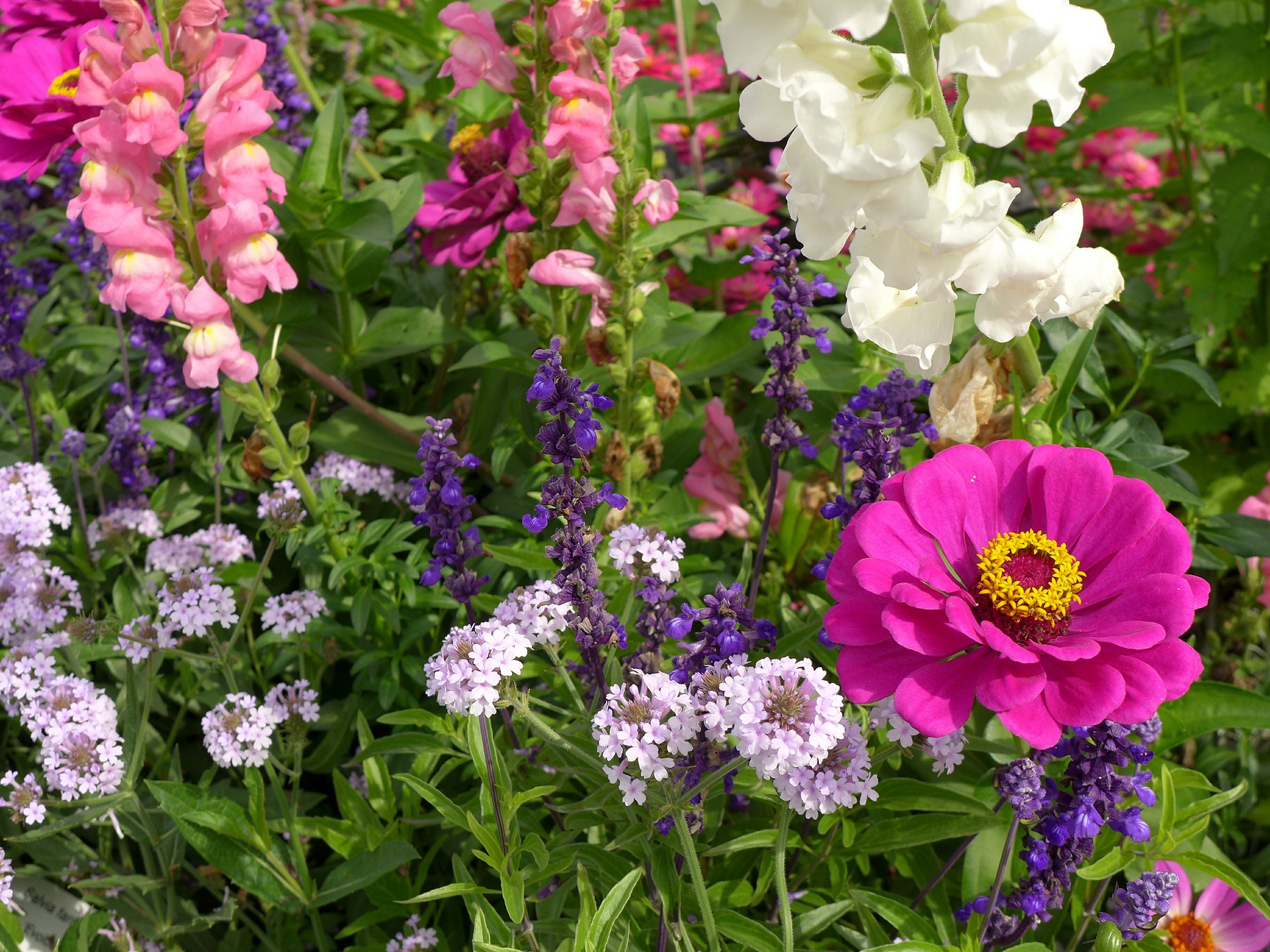 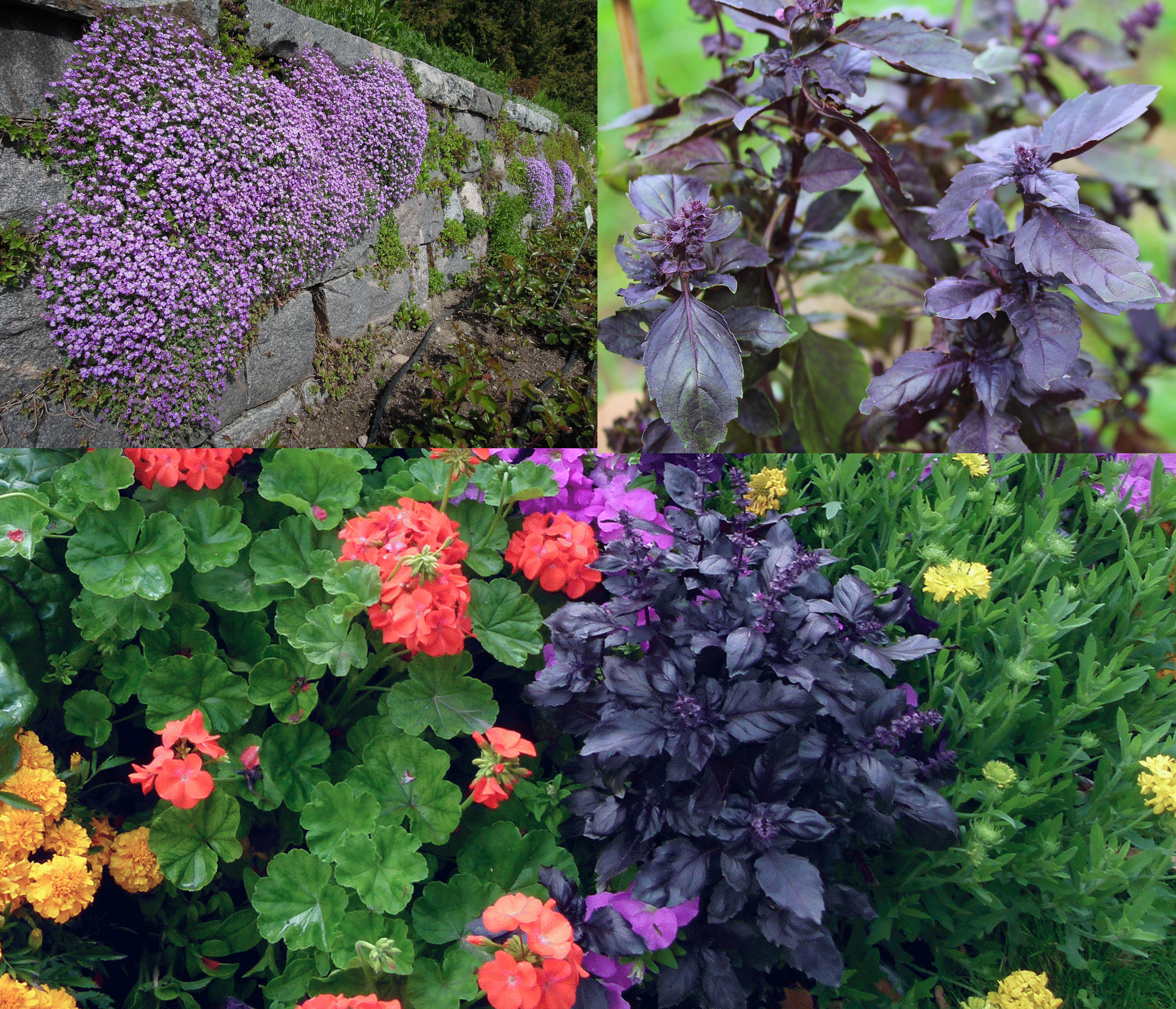 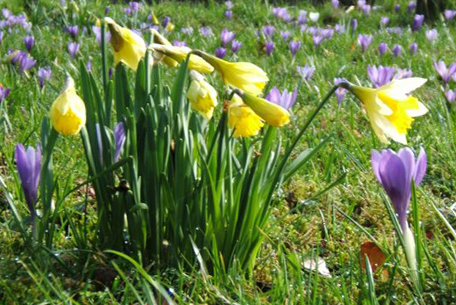 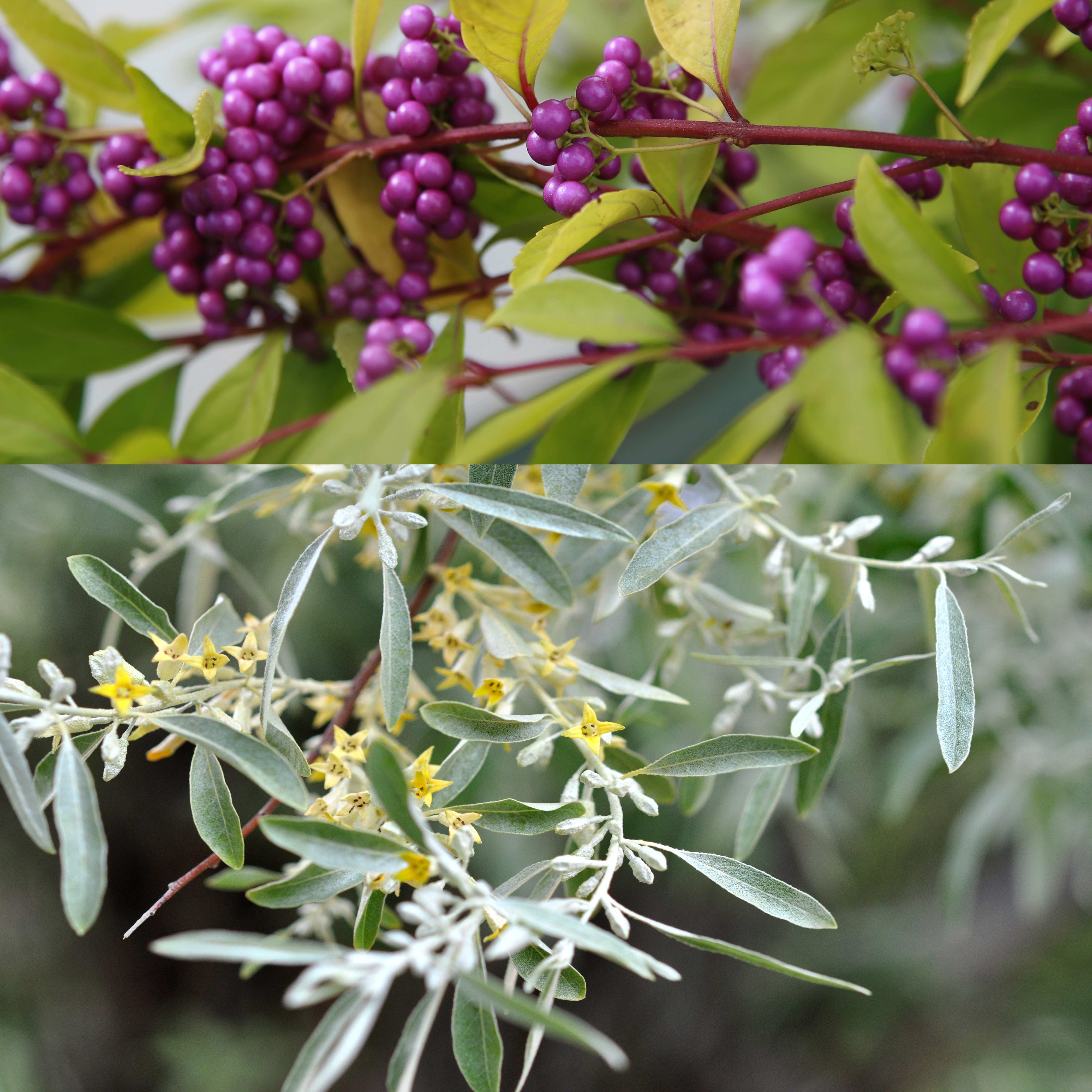