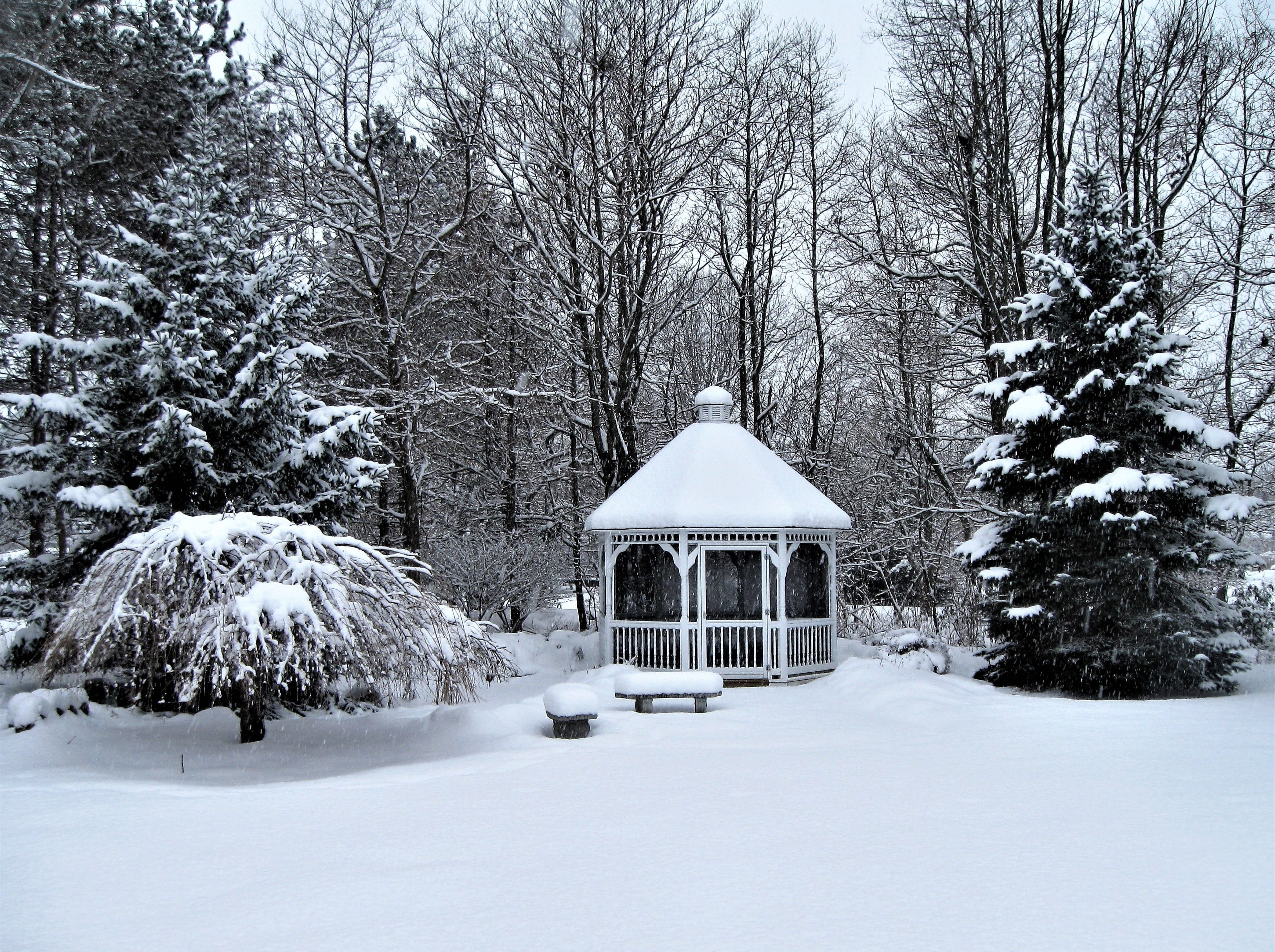 What started as a mild season, almost a non-winter winter, has turned into a “Snow-mageddon” here. It’s been snowstorm after snowstorm, temperatures so frigid that it’s dangerous to go outside and depressingly grey skies. Even winter-lovers were having a hard time defending this weather. I must admit that the slight enthusiasm I had mustered for the season was rapidly disappearing.

And then I got an unexpected gift -- a collection of emailed pictures from a friend’s treks in the woods. (Followers of this blog will probably guess that it was Sandy Defoe who sent the pictures; unlike so many of us, she lives for the winter months.) She had stumbled upon a field of hoar frost and she was euphoric over her rare find. 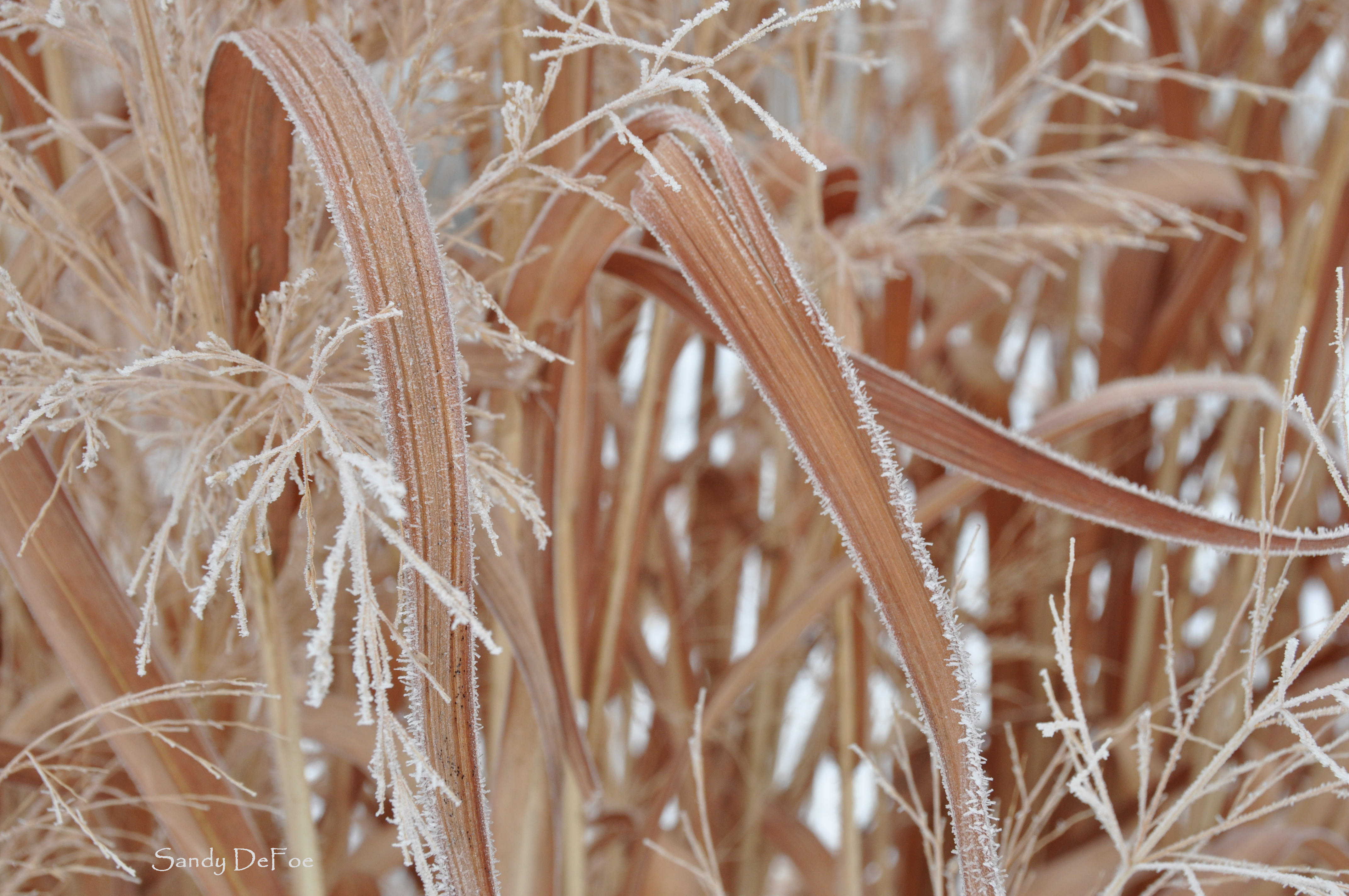 As I looked at the frosty scenes she sent with an artist’s eyes, I  suddenly understood -- even shared -- her excitement and wanted our readers to experience it too. 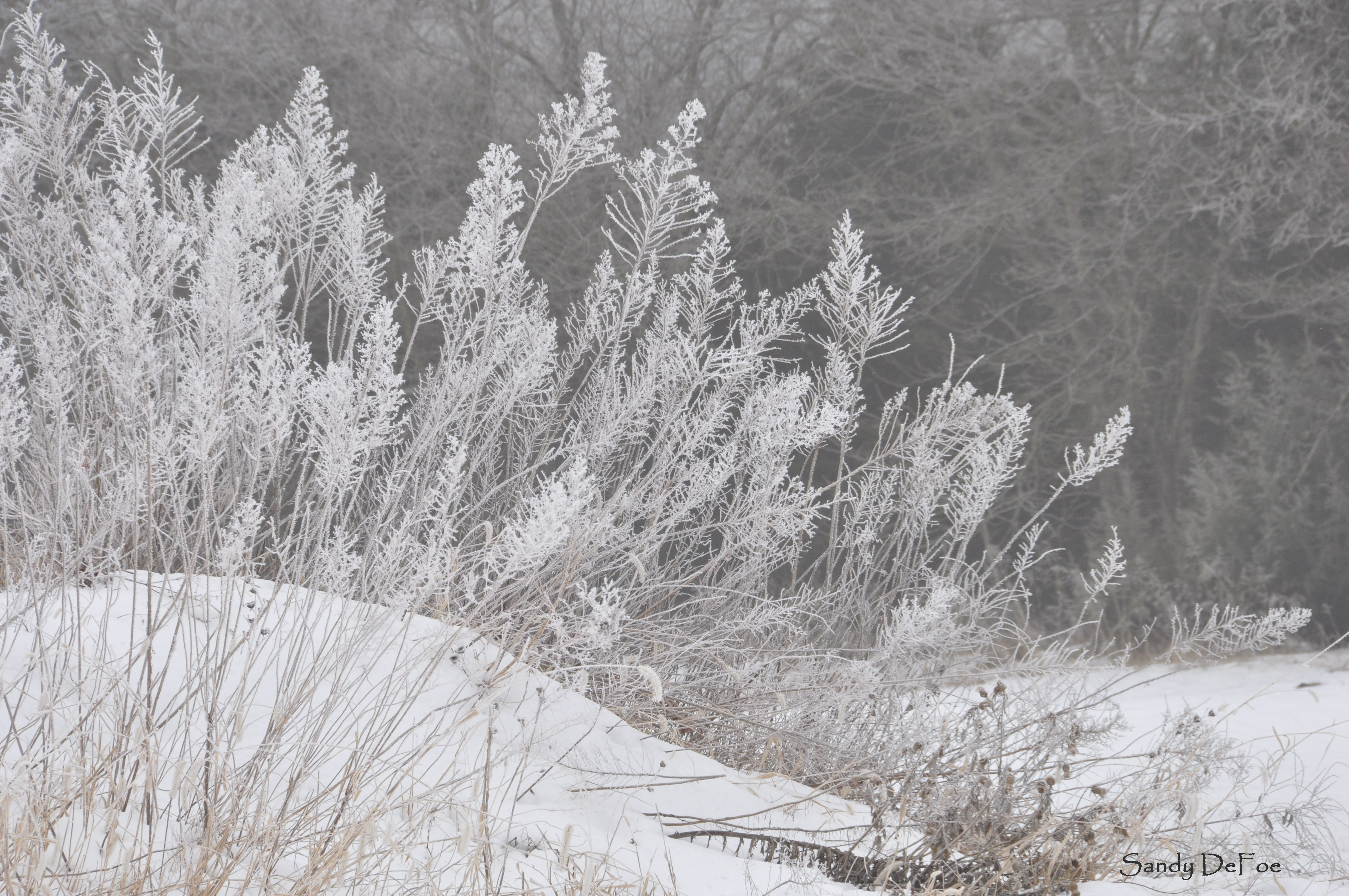 Really seeing the beauty in what she named hoar frost made me want to know more about what it was and how it came to be. Perhaps, I thought, I could create a field of hoar frost in my own yard to enjoy from inside on crisp, winter mornings. I envisioned myself holding a steaming cup of coffee and gazing over a crystalized wonderland. Then, reality caught up. Frost is not quite as straightforward as I always thought it was.

First, there are multiple types of frost. There are window frosts and fern frosts and wind frosts and black or killing frosts to name just a few. Here in the Midwest, we have three especially beautiful (if sometimes treacherous) ones, -- glaze, rime and hoar, or white frost. Glaze is what hides the windshields of our cars, covers our steps and sidewalks and blankets the trees when freezing drizzles rain mixes with cold surfaces. It’s smooth, transparent and solid, although you can often see tiny air bubbles trapped inside the glaze if you look closely. Glaze is common in temperate climates where the higher air is warmer than the lower air, and droplets fall onto objects with freezing surface temperatures. 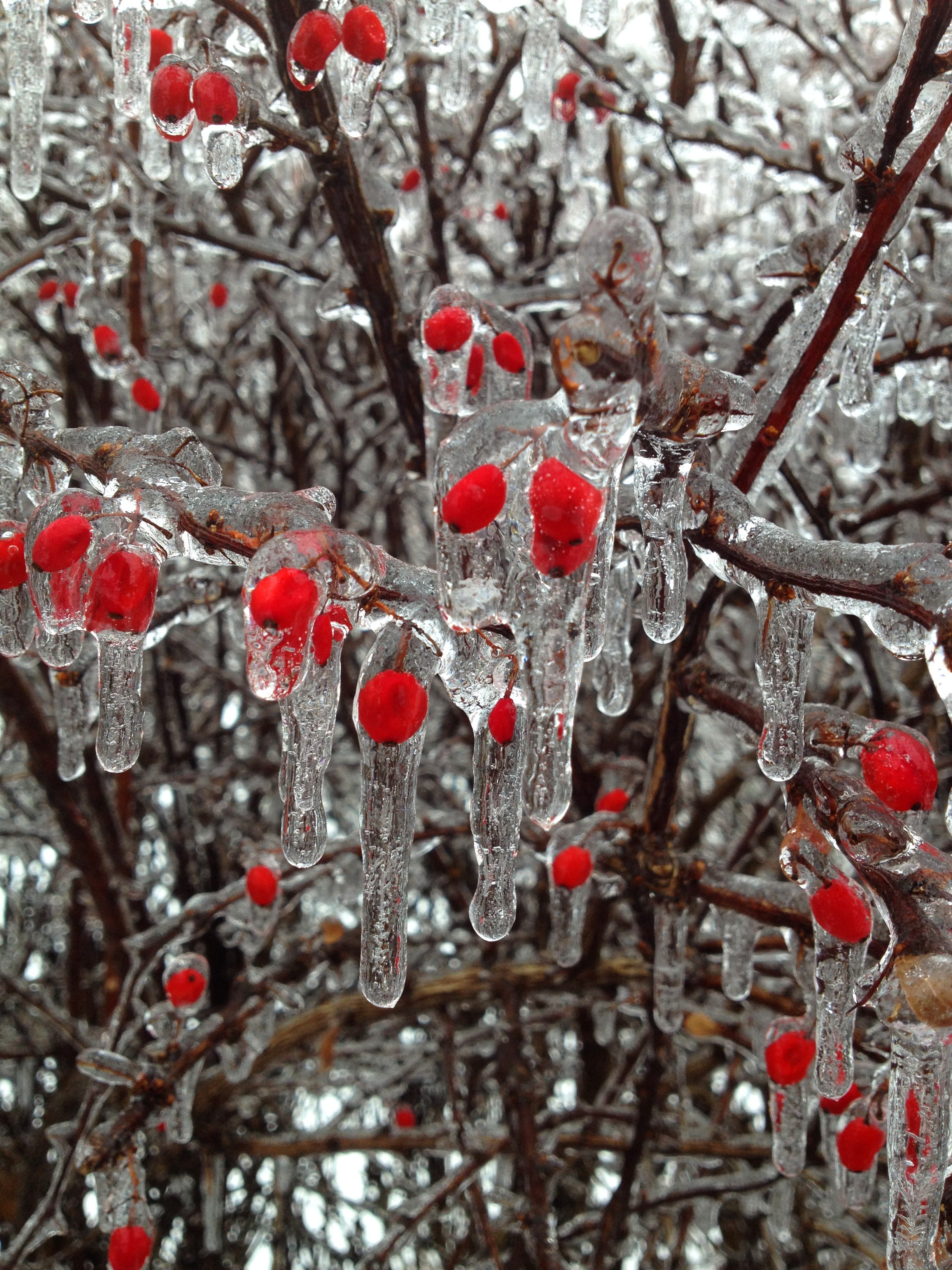 Rime ice is another type of frost. Rime ice often develops from dense fog. For rime to form, water droplets that are supercooled, or near freezing in temperature, attach themselves to the surface of an object that is already at or below freezing. As soon as the droplet attaches, it immediately turns into ice. Rime can be either soft and feathery or hard and dense, depending on weather conditions. It can accumulate and build up over time. Soft rime looks fragile,  while hard rime can appear opaque. Rime ice often appears on one side of an object, looking as if the wind blew it there on purpose. 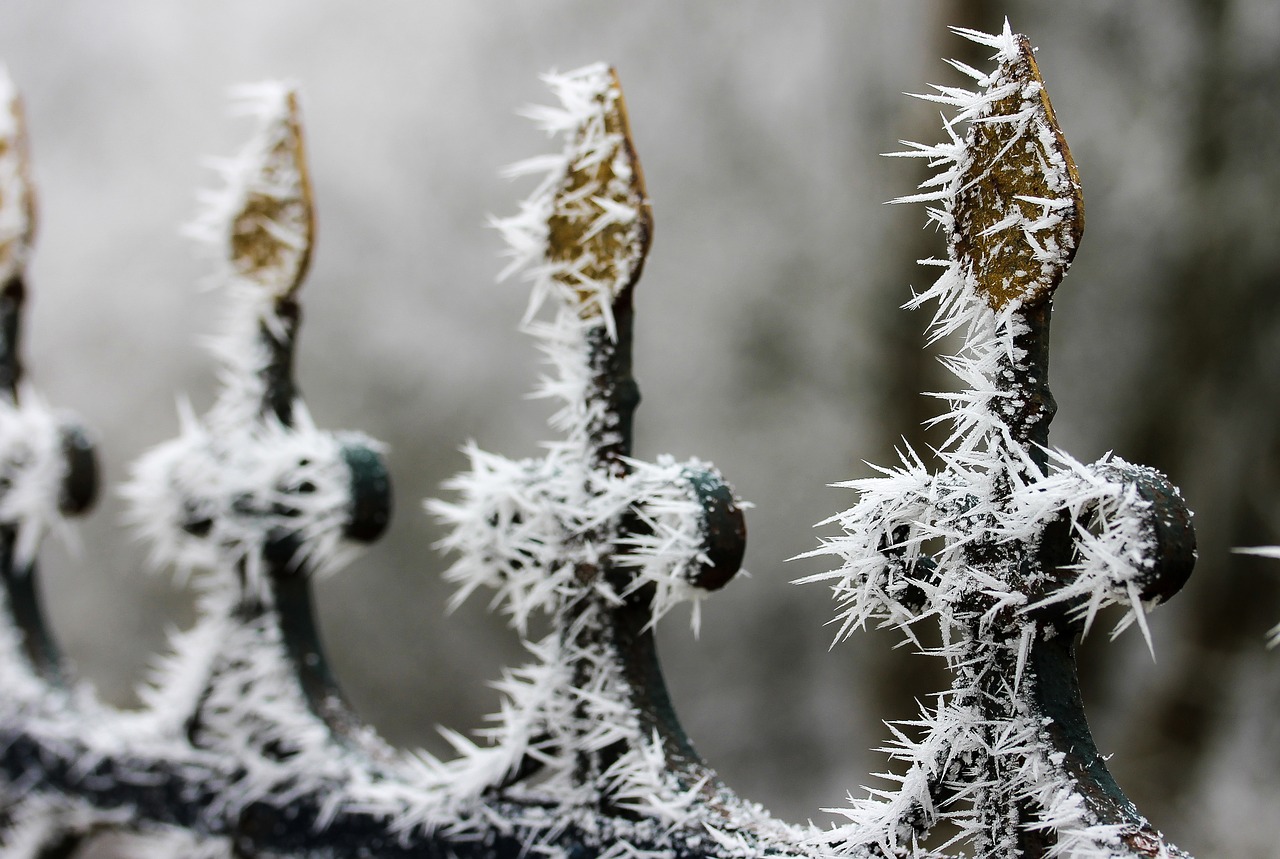 Hoar frost is the most delicate and elusive of the three.  (And has the most unusual name. Although there are several interpretations, most meteorologists contend that it is from the Old English and hints at the white beards of old men.) Hoar frost forms when water vapor, which is a gas, settles on supercooled objects. The gas immediately freezes on contact, completely sidestepping the water phase. Interlocking ice crystals form ice needles that can rest on the sides, the tops or the bottoms of freezing or near freezing objects. Unlike other forms of frost, white frost (hoar frost), forms on nights when the air is calm, cold and most of all moist. Moisture from an unfrozen stream or lake or an influx of humidity causes the delicate hoar frost to form,  turning an ordinary view into a magical but momentary scene.  As sunlight streams from the sky,  hoar frost disappears. 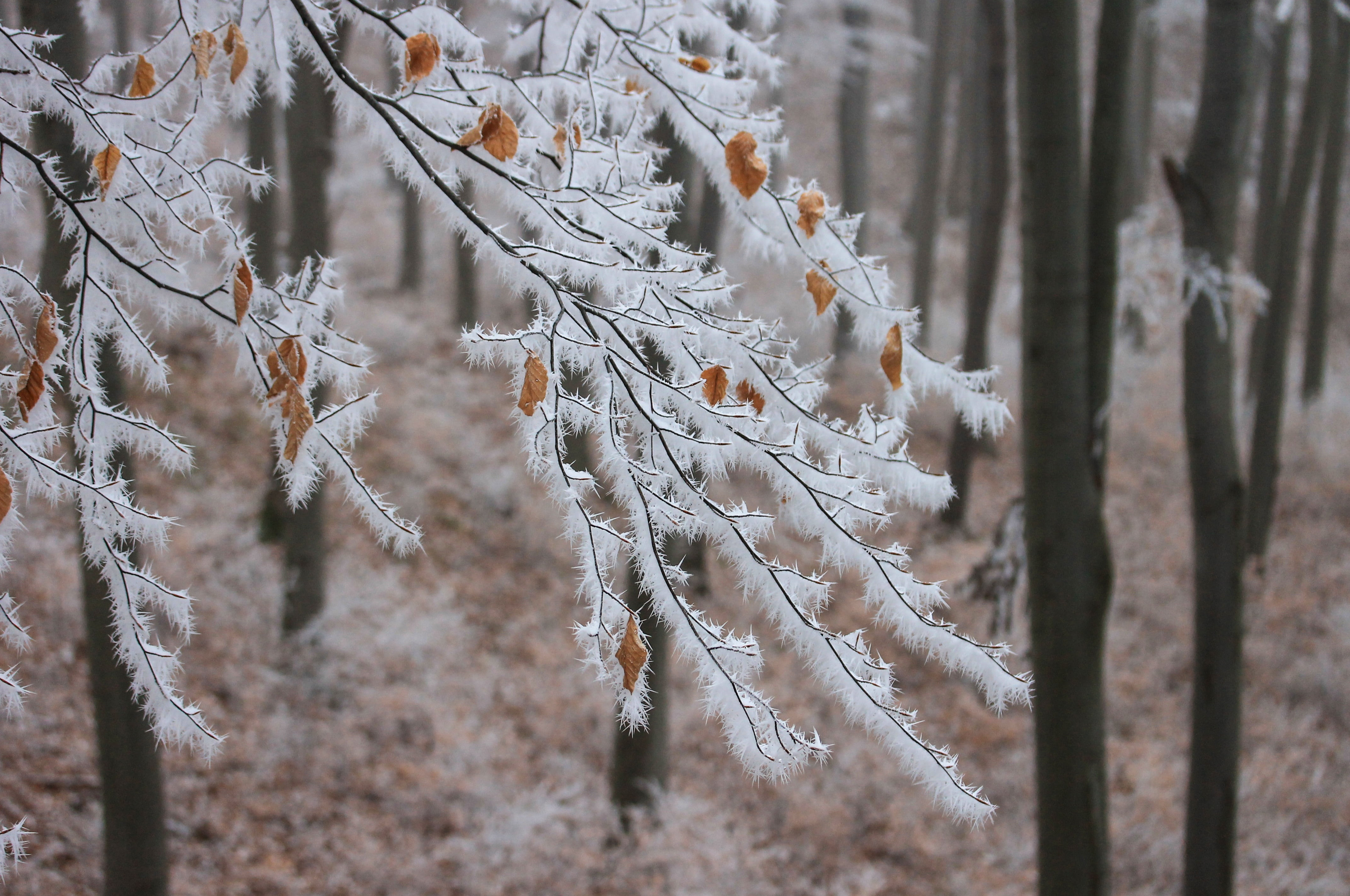 Capitalizing on the beauty of frost can add a new dimension to your winter landscape. The key to adding frost beauty to your winter garden is understanding the type of frost you are most likely to experience within your specific environment.  Either a layer  of common glaze  or a dusting of rime can create a dramatic picture, especially as the sunlight glistens off of ice-covered surfaces. Both can also be quite heavy so including plants in your  design that will bear the weight of the frost without damage is crucial. Small, ornamental trees added to the landscape can be gorgeous focal points for both glaze and rime frost displays. Small willows or a Harry Lauder Walking Stick  would glamorously showcase glaze or rime events. 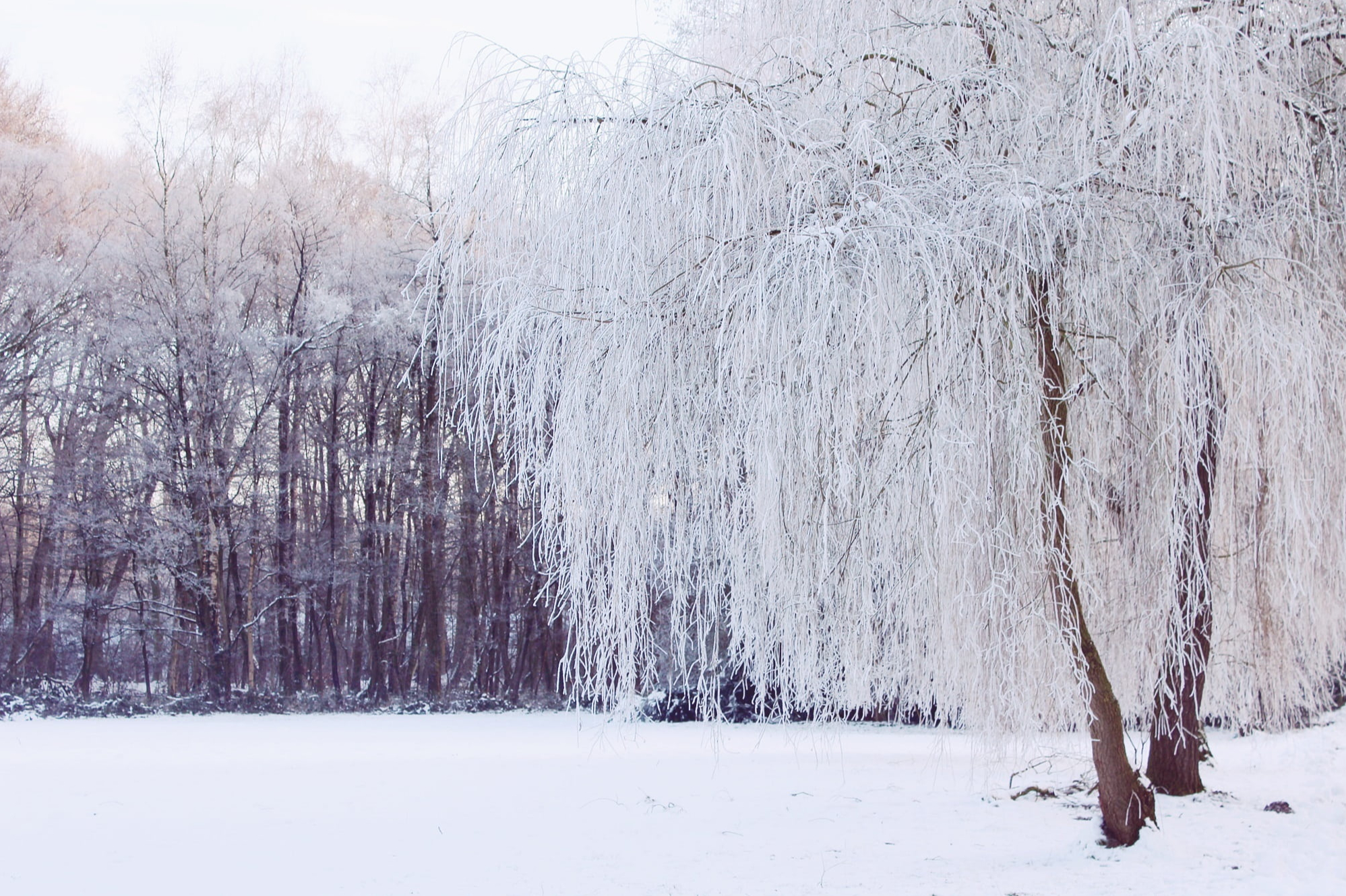 On the other hand, Hoar frost, with its ethereal appearance, is breathtaking on plants that hold fine details. If conditions in your yard make hoar frost a possibility, then consider adding ornamental grasses like Maiden grass,  Little Bluestem or Feather Reed grass and perennials that provide structure to the winter garden  --  think  Sedums, Monarda, Echinacea, Coneflowers, Rattlesnake Master and Alliums  --  to make an unforgettable winter wonderland in your yard.

Join us next week as we think about the taking advantage of winter's lights and shadows. See you then!