Do Mums Belong in a Pollinator Garden? 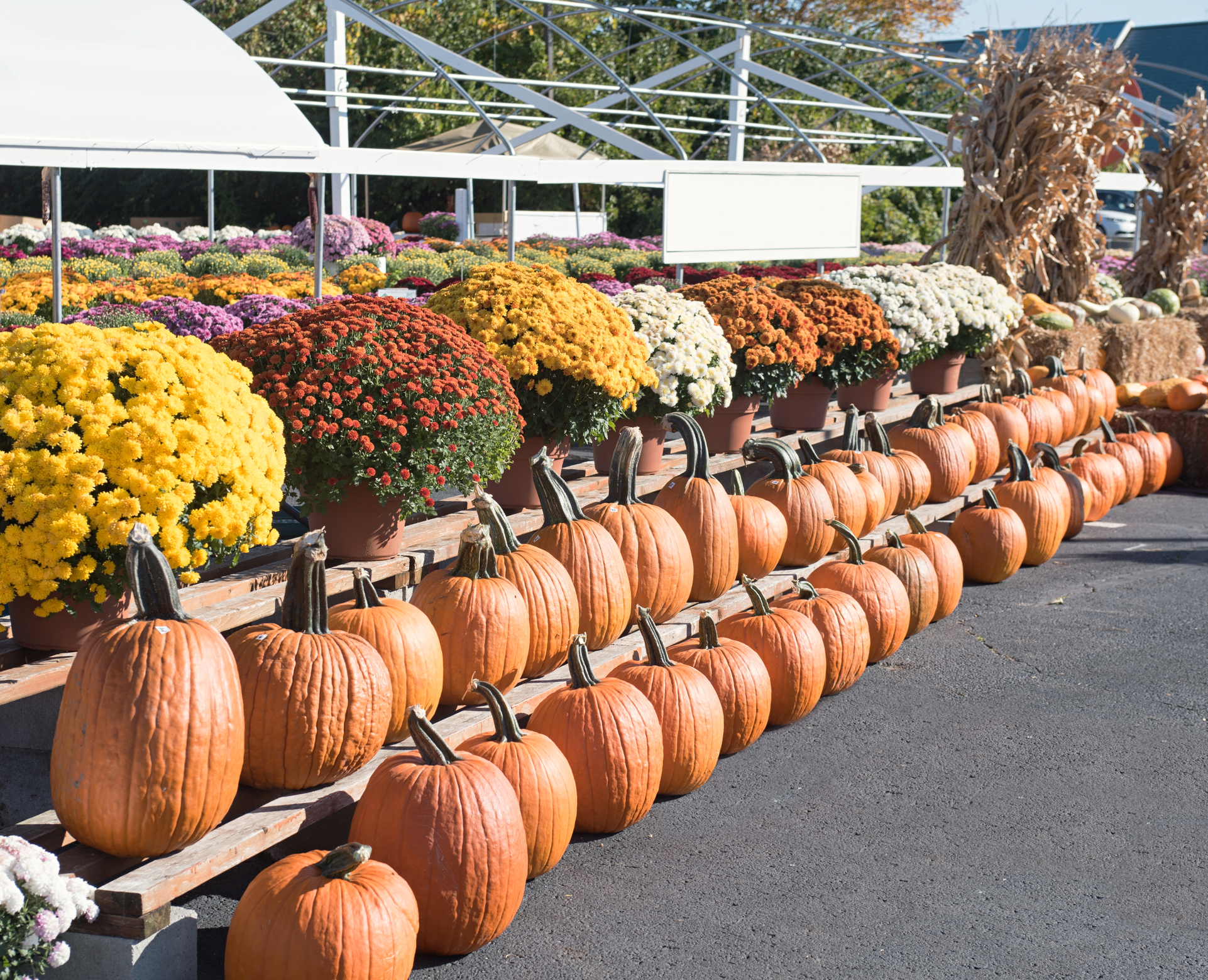 I popped into our local big box store yesterday to pick up a few bags of rock I needed to finish one of my backyard pathways. As I pulled into the parking lot, a huge sign greeted me, reminding me that planting fall blooming flowers helps keep our native pollinators fed. Since my garden is severely lacking in masses of blooms to feed my winged visitors right now, I decided to see what they had to offer.

At first glance, I was thrilled; the garden center was absolutely bursting with blooms  —  dozens of colors and shapes and varieties —of chrysanthemums.  Benches and benches full of them  –  and very few other nectar rich choices for the mum-reluctant gardener.

Chrysanthemums are often classified as cultigens which, according to the International Society for Horticultural Science, means that they are “plants whose origin or selection are primarily due to intentional human activity.” In other words, the mums we see everywhere from garden centers to grocery stores are the result of literally thousands of years of human breeding. Originating in China sometime before the 15th century B.C., they traveled to the western world during the 1600s A.D. and quickly became a garden favorite.

Garden mums are bred to be cold hardy, fairly compact and full-flowering. Since they are one of the few flowers that are considered short day plants, garden mums begin to set buds in late summer when days become shorter and nights become longer. Then, as fall brings even shorter days, longer nights and cooler temperatures, the buds begin to develop and eventually turn into blossoms. Stressful weather conditions like heat and drought can slow bud development, but most mum varieties bounce back to give a welcome show of color when temperatures cool and moisture returns. 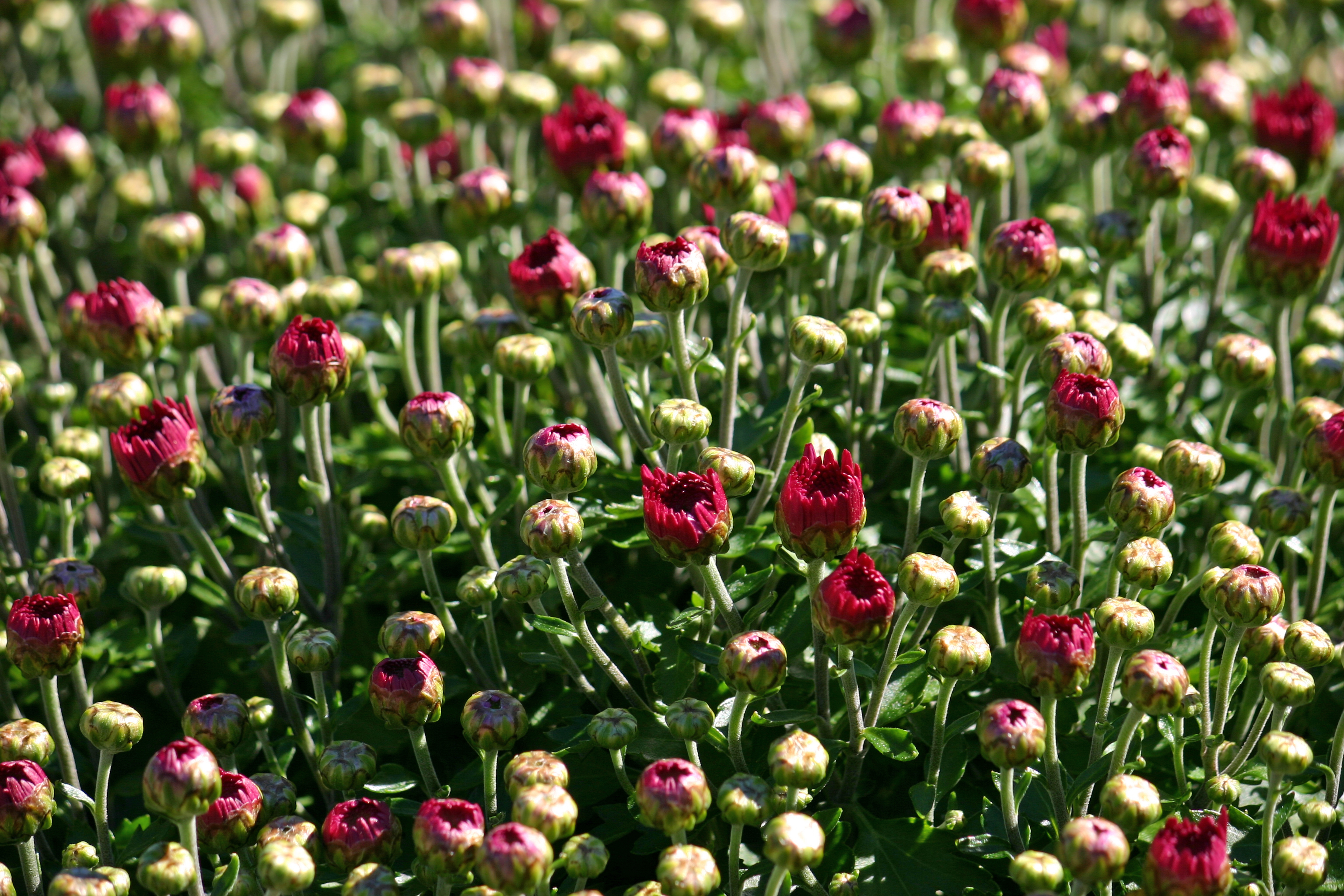 Although there are currently 13 classes of chrysanthemums, each based on the shape and characteristics of the bloom, most garden retailers will stock only a few of the more common varieties.

Typically, you can expect to find reflex, pompons, singles, doubles, anemones and decoratives since they blend easily into most residential and commercial garden designs.  (Check out the New York Botanical Garden page at https://libguides.nybg.org for more information about individual classes of mums.)

Like other garden flowers, the blooms of mums are actually many small flowers (florets) clustered together. The florets that are found on the perimeter of the bloom are technically named rays, but most of us refer to them as 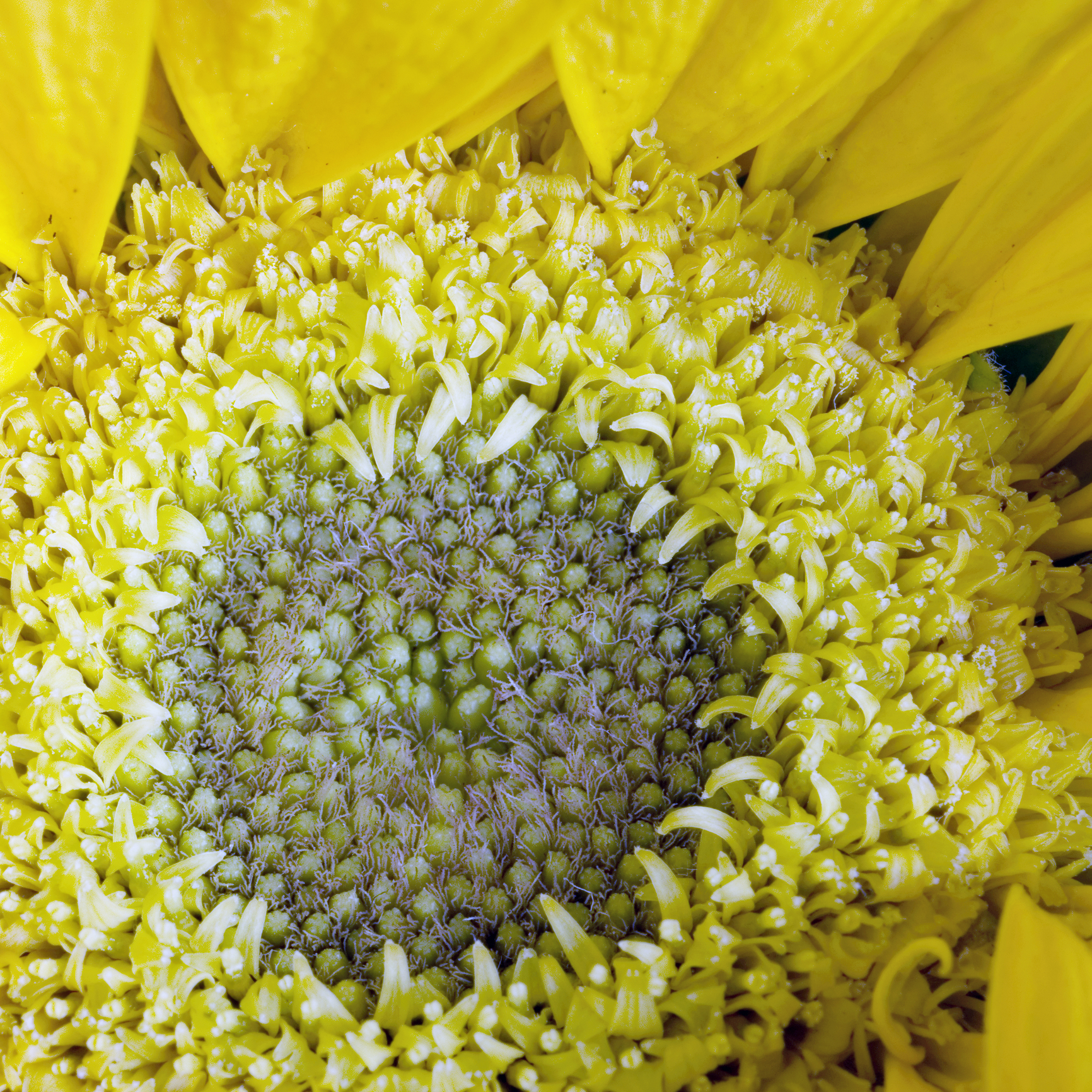 petals. The shorter, less showy florets in the center are called discs, and in many varieties of mums are where the flower’s sought after nectar and pollen are hidden…

…And the fact that the food sources are hidden becomes one of the problems that mums can cause for pollinators. As plants are genetically modified to have doubled blooms, the pollen rich stamens are often transformed into nutritionally empty rays.  With fewer productive stamens per plant, those creatures in search of pollen as a food source either find less, or even more alarmingly, none at all. 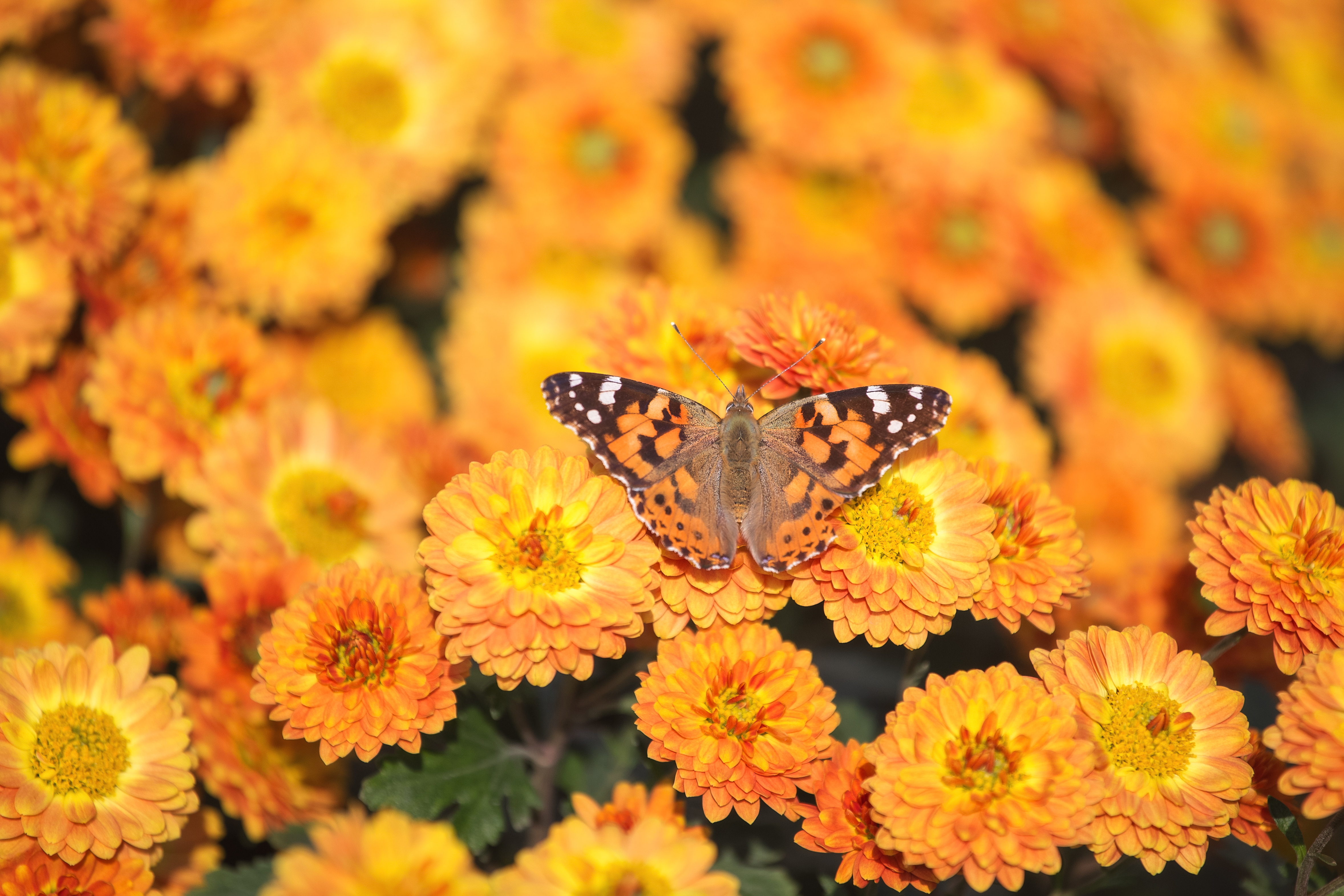 Finding nectar can also be a problem. Most of the time, nectar is found at the base of a flower (or floret), where it can also be hidden by a multitude of doubled petals. Unless the pollinators have a mouth part designed to probe deeply between the petals, the nectar will be impossible to reach. Even those with long proboscises often need, but don’t have, a landing pad in order to drink their fill. 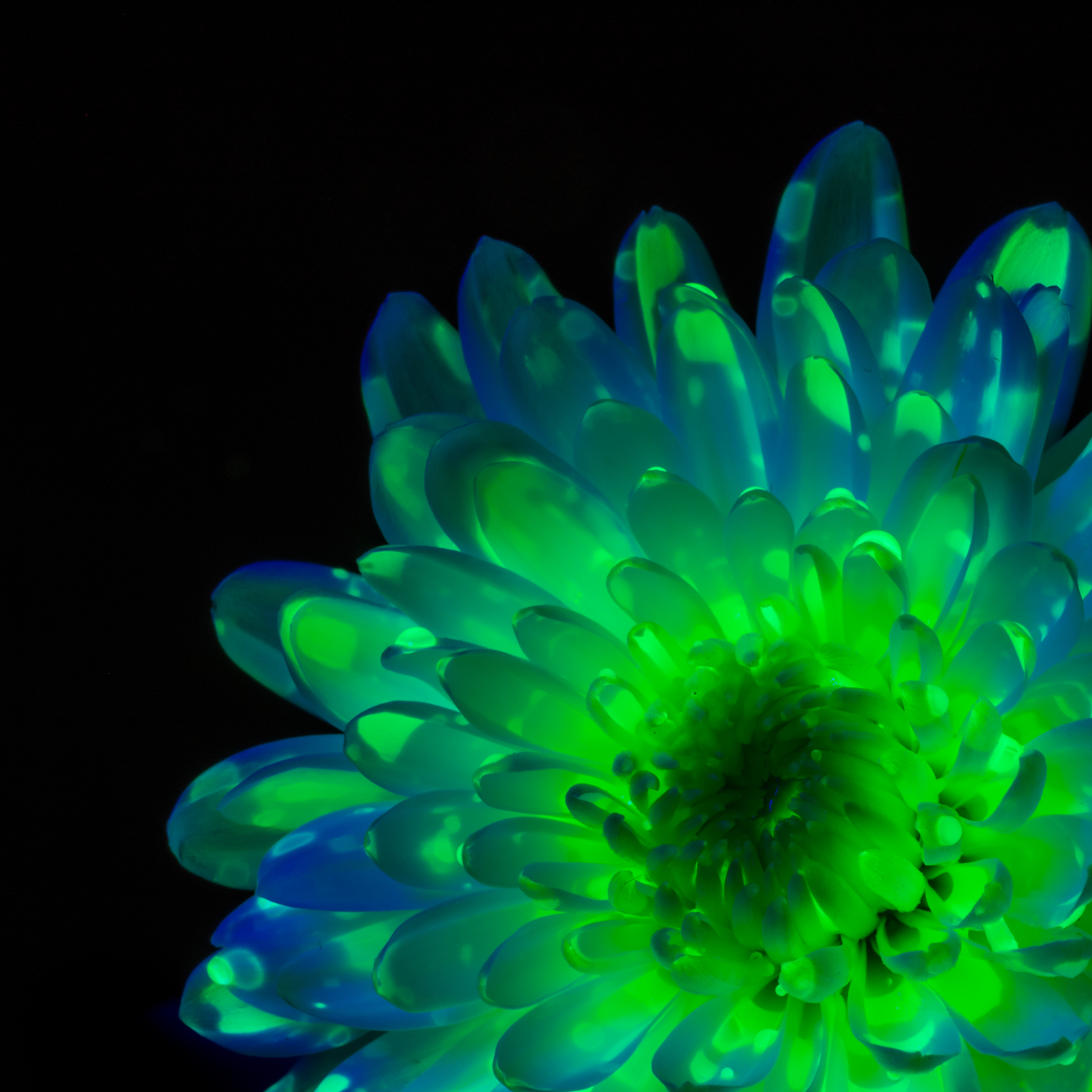 Another problem pollinators face with mums is the lack of a clearly defined road sign pointing to the nectar store. Insects, especially bees and butterflies do not see color exactly the same way that humans do. Researchers now know that flowers naturally have a marking that is sensitive to the light waves that insects can see but humans cannot. This natural marking leads pollinators directly to their food source. Unfortunately, as breeders work to change the color of a bloom, then they also can unwittingly remove an essential pollinator guidepost. As humans, we would know to move on to another, more productive source. Insects however, don’t have the capacity to reason, so they continue searching the flowers, looking for the path to the nectar. The unproductive output of energy weakens the pollinator at the very time of year an additional boost is needed.

Often referred to as the Queen of the fall garden, there is no doubt that mums can bring riotous color to an otherwise drab fall garden. The question of the value of mums as a pollinator friendly fall flower however, has been the subject of unresolved debate for several years. For those who are purists in their native planting outlook, mums may not be the best choice for an autumn garden. But if like me, you are comfortable with compromise, then go ahead and add a few of those fall beauties. Then, if you feel as though you have short changed your pollinator friends, it’s the perfect opportunity to add some fall blooming natives at the same time!