Several months ago a good friend of mine sent me a link to an NPR interview he thought that I would find interesting.  “Don’t be put off by the name,” he said, “just listen to the whole segment and see what you think.”  Because he is a good friend and generally levelheaded, I put aside my skepticism and listened carefully.  I’m glad I did.

NPR’s July 17th segment was my introduction to the Japanese custom of “Shinrin-yoku” or forest bathing.  Since  then I have encountered numerous articles and references to this brand-new yet age-old wellness practice that is moving from Japan and Korea to the United States.

Simply put, forest bathing is taking a leisurely paced, deliberate walk in the woods. Because it is deliberate, forest bathing is much more than just an offhand stroll. Rather, it is taking time to stop and purposefully examine your sensory interactions with your environment. It is being completely present in the moment. In doing so, you see each of the infinite shapes, colors and movements, hear the often muted sounds, feel the multitude of textures, and perhaps most important for your physical health, inhale the subtle fragrances surrounding you. Forest bathing allows you to cut the tethers of your devices, put aside your worries for a time and return to nature to reconnect and revitalize. You de-stress and basically just feel better.

The secret of forest bathing is the intentional engagement of all of the senses.

Feeling revived after spending time in and with nature is not a ground-breaking concept.  Generations have recognized the connection, but often considered it to be just an emotional response to time well spent. Researchers are now documenting significant physical and mental health benefits as well. In both controlled and uncontrolled studies, researchers in Japan and the United States have shown that forest therapy lowers blood pressure and heart rate, reduces stress hormones and glucose levels, increases anti-cancer proteins and boosts NK (Natural Killer) cells well beyond the actual time spent in the forest. These health benefits appear to be tied in part to the volatile compounds (phytoncides) released by trees and other forest plants which are then absorbed by our bodies.

The mental health benefits from forest bathing are also intriguing. As part of a 2015 Taiwanese study,  the Profile of Moods State test was used with 100 middle aged men. After completing twelve days of guided forest walks, it was found that forest bathing reduces “tension, anger, fatigue, depression, confusion and anxiety as well as improves positive emotion.” Currently, a research team including investigators from the National Institute of Health, the University of Arizona, Massachusetts General Hospital and the Uniformed Services University of the Health Sciences’ Consortium for Health and Military Performance (CHAMP) are beginning a year long study at Walter Reed Hospital in Bethesda, MD to gather data about the restorative effects of nature for traumatic brain injury patients and those with post-traumatic stress disorder.  The project, called the Green Road Project, hopes to show the importance of including and utilizing green spaces in both military and civilian health care facilities. 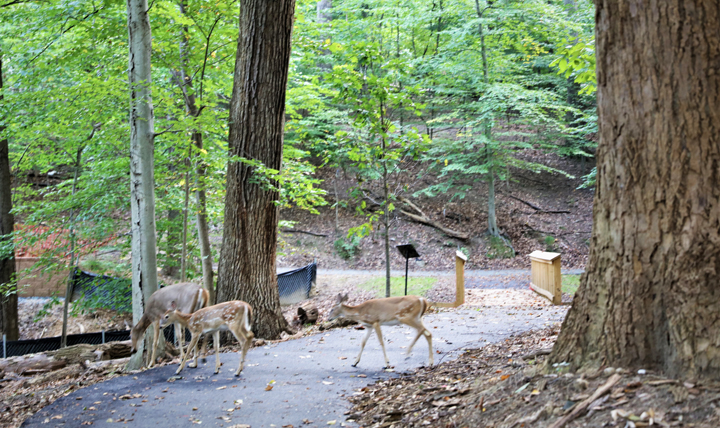 Realizing the many health benefits of forest bathing, the Japanese adopted the program into their national health initiatives in 1982.  At present, they have designated over 40 specially designed trails certified as forest therapy trails and have guides trained to lead groups on their restorative walks. It has become a common practice in their modern-day culture and lifestyle.

Unfortunately for many city dwellers here in the United States, taking a guided forest therapy walk is not always an easy task to accomplish. Access to forested land and trained guides can be limited by time, distance and cost. Although there is a burgeoning movement toward certified trainers and designating parts of national forests as therapy activity spaces, resorts, spas and parks across the country are also beginning to offer guided forest bathing walks.

Until the goal of safe and appropriate sites on public land is met for everyone, no one needs to sacrifice the benefits of forest bathing.  Spending a few undisturbed hours walking through a stand of trees, taking in the sights, sounds, textures and aromas can be a tonic for the body, mind and soul.

Embassy employees are proud of the fact that they have added beauty and wellness to the environment.

We are living in a stressful, often chaotic world.  Mental and physical wellness is on a decline.  People are searching for ways to feel better. Rather than take a pill, it may be better to take a walk — in the woods.